As the latest showdown over raising the country's debt limit comes to a close, and as Washington gears up to repeat the fight in December, we're hearing another round of calls for that charmingly cranky idea, the trillion-dollar coin. If the government doesn't have enough money to meet its obligations, the argument goes, it can simply mint a platinum coin worth $1 trillion or more. While the law limits how many gold, silver, or copper coins are in circulation, Congress passed legislation in the mid-1990s that appears to give the Treasury a much freer hand when issuing coins made of platinum. The bill in question was only supposed to cover commemorative coins, but its actual language isn't so narrow, and so the forces gathered under the #MintTheCoin hashtag believe that they've found a loophole.

This idea has been sloshing around liberal circles for about a decade, going back to the debt-ceiling fights of the Tea Party era. But the concept is older than that. It's even older than "The Trouble With Trillions," the 1998 Simpsons classic in which the U.S. government prints a trillion-dollar bill, Mr. Burns steals it, and he and Homer flee to start a newer, freer country. (They end up in Cuba.) In fact, it's been around longer than that commemorative coin bill. It goes back at least as far as 1992, when Lt. Col. James "Bo" Gritz—forefather of the militia movement, self-proclaimed "real-life Rambo," and presidential candidate of the America First Coalition—promoted a strikingly similar idea on the campaign trail, alongside his promises to rescue POWs from Vietnam, withdraw from the United Nations, and prohibit foreign ownership of American land. 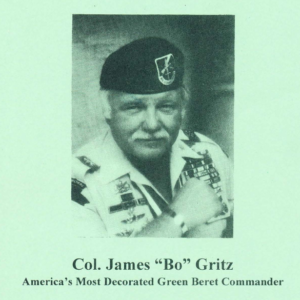 Gritz didn't win the '92 election, but he did do best by one minor metric: When my old boss Bill Bradford took a motorcycle trip through Idaho that year, he told me afterward that he had seen more campaign signs for Gritz than for any other candidate. The man wound up getting 10,281 votes in Idaho, which isn't bad by third-party standards—not enough to carry the state, or even to come close, but you can see how it could translate into a lot of yard signs. In Franklin County, where Ross Perot's total pushed Bill Clinton into third place, Gritz came within 23 votes of knocking him down to fourth. That probably says more about Clinton's local popularity than Gritz's, but I guess the colonel can claim it as a moral victory.

The Treasury doesn't seem likely to mint any trillion-dollar coins this year. But if it does—and hey, we live in weird times—then Gritz can call that a victory too. No doubt he'd be even happier if the government adopted the rest of his monetary agenda, by supplanting America's Federal Reserve notes with an interest-free "constitutional currency," but the times aren't that weird. Not yet.

(For more about Gritz, read chapter 10 of my book The United States of Paranoia, available here. To see more of his San Diego speech, go here. For past editions of the Friday A/V Club, go here.)