The fiscal crisis looming over Social Security is no longer a distant threat. The national pension system will be insolvent by the time workers now in their mid-50s are ready to retire.

The annual report to Congress from the Social Security Trustees, released this week, paints a grim picture of an entitlement program that was already veering towards insolvency before the COVID-19 pandemic accelerated that trend. The Trustees now estimate that Social Security will be unable to pay the full amount of promised benefits by 2033, one year sooner than the same report estimated last year. Absent any policy changes, beneficiaries will receive just 78 percent of what they've been promised starting in 2034.

The pandemic caused a spike in retirements, but the underlying issues with Social Security remain the same as they've been for decades: the math simply doesn't add up.

Social Security will see negative cash flow of $147 billion this year, and the deficits will keep adding up as the population ages and there are fewer workers paying into the system relative to the number of retirees collecting benefits. Last year, there were 65 million Americans getting benefits from Social Security, while 175 million people paid into the system via payroll taxes, according to the Trustees' report. That's less than three workers for every beneficiary, a near-historic low.

Those deficits will eat up the Social Security Trust Fund over the next decade, and insolvency awaits. The trust fund itself is actually an accounting fiction—it contains nothing except IOUs that the government has written to itself over the years. In some ways, then, what the country is really facing is the evaporation of the pleasant fiction of the trust fund as a backstop for its largest entitlement program.

The big question also remains the same: when will Congress take this imminent crisis seriously?

The last time Social Security recorded a deficit, in 1982, it spurred lawmakers to make several changes, including an increase to the payroll tax that funds Social Security, to keep the program solvent for a few more decades. This time, however, there is almost no indication that either major party is prepared to act.

The bulk of Social Security's funding comes from a 12.4 percent payroll tax that's split 50/50 between employers and employees. Only the first $142,800 of income is subject to the tax. Lifting or removing the cap, or raising the tax rate, would generate more revenue for the system. Alternatively, reducing benefits for some or all beneficiaries—either by instituting across-the-board reductions or by means-testing in some way—could bring Social Security's liabilities in line with its assets.

Ensuring Social Security's solvency for the next 75 years would require hiking the payroll tax by 3.36 percentage points today, or making an across-the-board 21 percent cut in benefits.

The more time that passes, the heavier the lift will be. According to an analysis from the Committee for a Responsible Federal Budget, which advocates for low deficits and sustainable entitlement programs, delaying action until insolvency hits in 2034 will make the needed tax increases or benefit reductions about 25 percent larger than if Congress acted today. In either case, the changes will be seriously disruptive to Americans' retirement plans and financial security. 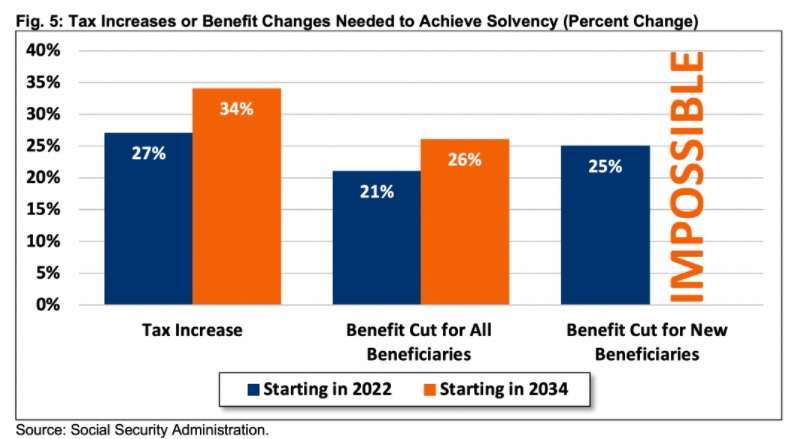 Inflation is also going to take a toll on Social Security. The Wall Street Journal reports that senior administration officials believe the program will automatically provide 6 percent cost-of-living adjustments next year. That's significantly higher than the 1.3 percent and 1.6 percent adjustments provided in the past two years.

When Social Security launched in 1935, the average life expectancy for Americans was 61. That means the average person died four years before qualifying for benefits. It was imagined as a safety net for the truly needy, not a conveyor belt to transfer wealth from the younger, working population to the older, relatively wealthier retired population.

Now, the average American lives to 78, more than a decade past the age (67) when they can start collecting Social Security benefits—and 16 years beyond the eligibility age (62) for early retirees to collect partial benefits.

Restoring Social Security to its proper place as an old-age entitlement program and not a national pension system would be a good place for Congress to start. That means raising the eligibility age for benefits. And given the federal government's track record of awful fiscal management, it also makes sense to empower individuals to control more of their retirement savings. Privatizing Social Security—or at least letting individuals opt-out of the program so they can escape the sinking ship—would be a huge win for younger workers who have time to save on their own.

Congress has mostly abandoned any pretense of fiscal sanity, but the math governing Social Security's decline is inexorable. Waiting any longer to take it seriously only invites a bigger mess.