Sometime around 1978 I was on line to use an ATM near Columbia University when a deranged man wrapped in a moving blanket came up to the young woman in front of me and began screaming his vilest fantasies at her. The poor woman, like everyone else in line, pretended the man didn't exist. But the ravings only continued; he was practically screaming rape in her ear.

Finally I started screaming back. I'm not sure what I yelled—I just hoped I could bluff him into quitting. Amazingly, he began to slink off, but not before cackling as he revealed a bread knife that, in memory, looms as large as a cavalry sword.

Such was everyday life in the apocalyptic New York of that era. The city was essentially bankrupt, its residents were moved to extraordinary levels of violence, and Gotham's vital circulating system—its graffiti-encrusted subways—was near collapse. Schools, roads, public housing, you name it: It was all failing. People who could afford to leave fled in droves. It's hard to believe that anyone who lived through those times could have foreseen the astonishing resurrection of the place that followed. But even at its worst, the city never lost its profound vitality.

Since then New York has made like Lazarus, not just rising from the dead but also following its most famous statue's advice by welcoming the immigrants who have played a crucial role in revitalizing the city. In coming back to life, it has overcome crime, default, crack, blackouts, hurricanes, 9/11, the COVID pandemic, and even Bill de Blasio. 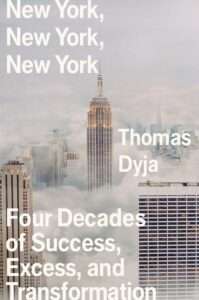 In a book as marvelous and maddening as the city itself, Thomas Dyja tells the story of this remarkable resurrection. New York, New York, New York opens on Valentine's Day 1978, when pols and celebs braved a snowstorm to launch a desperate new "I Love New York" marketing campaign. From there the book races around town and across 36 years spanned by four mayors, sticking to the headlines but also getting behind them, parading and prodding the rich and famous. It makes the case, sometimes unwittingly, that government works best when it recognizes its limits, that capable people can work miracles when engaged, and that New York may well be unsinkable. At least pending rising sea levels.

Dyja's energetic storytelling, eclectic interests, and supple prose make New York, New York, New York a tour de force, and his intellectual integrity overcomes the passionate political convictions that help to make his chronicle so pungent. Still, it's frustrating at times to be dragged around town by someone who seems to see the bad things that happen as divine retribution (for the usual sins of capitalism, whiteness, etc.) and who averts his eyes from some inconvenient aspects of the story.

Crime was the overwhelming issue of the era and brutalized the most vulnerable New Yorkers, yet it gets little attention until it's time to cover its conquest. The public employee unions that exercised such vast and doleful influence get barely a nod. Dyja slaps around the conservative Manhattan Institute without seriously engaging with the liberal ideas and assumptions that accounted for much of the city's trouble. He lauds the government's efforts to build affordable housing but ignores the many factors that historically made housing in New York so scarce and shabby, including rent control, arcane zoning rules, hostile NIMBYs, and an endless approvals process.

Back in the 1970s, for example, a developer tried to put a market in the grandly vaulted space under the Manhattan side of the Queensboro Bridge—a grimy cavern used at the time for storage. City agencies, politicians, and residents locked horns, litigation ensued, and it was 22 years before the plans came to fruition. Another example: the two miles of Second Avenue subway New York managed to build after decades of delays cost more than $2 billion per mile, five or 10 times the cost in other expensive cities around the world. At these prices, you can't much develop outlying neighborhoods because you can't afford to install transit. No wonder it's so hard to build anything but condos for tycoons.

It's also unfortunate that Dyja says nothing about how the City University of New York, a historic ladder to prosperity wrecked by open enrollment and self-serving bureaucracy, was restored to health and function. It's a case study in how delusional idealism harmed the very people it was supposed to help—and how city institutions were salvaged in the city's rise from the ashes, in this case by a chancellor named Matthew Goldstein.

Enough already. Those who want a different perspective on big government's impact in New York can look to important earlier books by Charles R. Morris (The Cost of Good Intentions) and Vincent Cannato (The Ungovernable City), among others. Dyja is up to something else entirely, painting a vaster and more dynamic canvas that does vivid justice to the infinite complexity of the nation's most important city. So we get not just mayoral politics and business improvement districts, but Saul Steinberg and Bernhard Goetz, Elaine's and Patti Smith, Andy Warhol and hip hop. We also get the important figures—like park saviors Gordon Davis and Elizabeth Barlow—who rolled up their sleeves and did the CPR, pumping the city's chest until it was ruddy once again with life.

Dyja is tough but fair on the four mayors—Ed Koch, David Dinkins, Rudy Giuliani, and Mike Bloomberg—who pass beneath his microscope. Being New York's mayor is a thankless if not hopeless task, and a political dead end too, so it's not surprising that seekers of this office might tend to be slightly crazy. An earlier mayor, the photogenic liberal John Lindsay, was thoroughly masticated by his two terms, and the financial crisis that came to a head under one-term hack Abe Beame (whose unironic campaign motto was "Beame knows the buck") delivered the city into the unsentimental hands of a panel of financial overseers.

Even under the best of circumstances, mayoral authority has long been quite circumscribed. As Lindsay learned, the unions ran their domains and the state controlled much of the rest. It took legislation—hotly contested—from Albany just to require city dwellers to pick up after their dogs. Mayoral control over such crucial functions as transit and education has waxed and waned over the years, but the voters blame the incumbent regardless.

New Yorkers remember Ed Koch for his eagerness ("How'm I doing?!") and pugnacity. Even as Dyja tags him for indifference toward blacks and for refusing to come out as gay (which he may or may not have been), the author credits him for important management reforms needed to turn what had long been a disorganized patronage machine into a functioning city government. His successor, the ever-courteous David Dinkins, is Dyja's favorite, yet also the weakest. The most liberal of the quartet, he also hired Ray Kelly as police commissioner and found the money to add thousands more cops (hired after he left office) as part of Kelly's extensive crime-fighting plan. These actions (at the very least) coincided with the start of a long and multi-mayor decline in the city's horrendous crime rate—at the end of which New York would be the safest major metropolis in America.

Dyja dislikes the unlikable Giuliani even more than he does Koch. We can tell because his animosity gets the better of him and he mocks the new mayor's eight-year-old son, who during his father's inaugural address "jutted his chin like a mini-Mussolini, pumping a fist as he chanted along with his father's oddly imperial closing. 'It should be so and it will be so!'" Still, Dyja gives the future devil his due in recounting the mayor's steadiness and dedication on that bright September day 20 years ago when two hijacked jets smashed into the twin towers of the World Trade Center. Having just finished cancer treatments, "Rudy Giuliani led the way through it all."

Dyja is aghast throughout at the affluence of plutocrats and yuppies alike (rich artists like Jeff Koons get a pass), yet he sees billionaire Mike Bloomberg as a great mayor. Even in condemning the stop-and-frisk policing that was a blot on the administration, the author observes: "The City had helped break the fever of crime with some extreme measures akin to chemotherapy. But chemotherapy stops." Bill DeBlasio, by contrast, is eviscerated in a brief and devastating epilogue that portrays him as vain, ineffectual, and expedient—even if he is the most progressive of the lot. In short, Dyja's judgements about such things are honest and do not always accord with what you might expect from his politics.

By the end of this bravura performance, you may even find yourself nostalgic for the New York of the bad old days. Take my advice: Get over it.