More than 4,500 immigrant children and teens are being held in enormous, filthy tents on a military base in Texas without access to basic necessities, including underwear, according to interviews, photos, documents, and recordings obtained by Reason. Hundreds of senior federal employees from various agencies have been detailed to the facility, where they are being highly compensated to perform tasks for which they have little training or direction.

"If you took a poll, probably about 98 percent of the federal workers here would say it's appalling," a federal employee detailed to the facility told Reason. "Everybody tries in their own way to quietly disobey and get things done, but it can be difficult."

The shelter, which is largely populated by teenage boys, is housed at Fort Bliss, an Army base near El Paso, where the harsh desert climate is used to simulate conditions in Afghanistan and Iraq. As other shelters are being shut down, the Fort Bliss shelter is swelling. In theory, these shelters are a way station for kids who are waiting to be reunited with relatives or other connections in the United States. In fact, staffing problems and other issues have left many kids stuck in limbo for up to a month or more.

The Associated Press first reported earlier this month that, after moving them out of Customs and Border Protection detention centers, the Biden administration is holding "tens of thousands of asylum-seeking children in an opaque network of some 200 facilities." On Monday, Health and Human Services Secretary Xavier Becerra said the Fort Bliss facility was not fit for "tender age" children, but thousands of teens continue to be housed there. 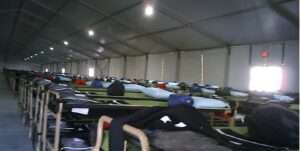 The shelter is staffed by a mix of contractors and federal employees detailed to the Department of Health and Human Services (HHS), many of whom signed up for the duty out of a desire to help stranded immigrant kids. Roughly 750 federal employees work there, according to a May 22 daily update obtained by Reason. A federal employee said most of them are essentially working as "babysitters and clerks." As of May 22, the shelter held 4,632 minors—3,873 boys and 759 girls.

Recordings obtained by Reason reveal the stress the influx of unaccompanied minors has put on the federal government. They also reveal that leaders at the shelter are well aware that they are failing to provide basic necessities, including medical care and physical safety, to the children under its supervision.

Federal employees detailed to the Fort Bliss shelter, speaking on the condition of anonymity, told Reason they are working 12-hour shifts six days a week. Basic forms and equipment, including lice kits, are in short supply, and frustration is mounting.

In a recording of a recent training session for federal employees run by a staffer from Chenega, an Alaska Native–owned corporation that is providing workers for the shelter, the trainer acknowledges a variety of failures.

"I'm not going to lie, we've got people dropping like flies because it's just not something that they're used to," the trainer says in the recording, which Reason is not releasing to protect the source's identity. "This facility is growing so fast, and we are getting kids on a daily basis. We don't have enough staff to maintain." 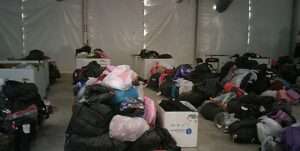 The trainer also alludes to the poor conditions inside the tents, which house up to 1,000 people, each in stacked bunk-style cots.

"I've been into one dorm, one time, and I was like, yeah, I'm not going back there," the trainer says. "They're filthy. They're dirty. There's food on the floor. There's wet spots all over the place. The beds are dirty. I don't know what's going on or who's responsible for ensuring that the dorms need to be clean, but we all need to be responsible for telling the minors to clean up after themselves."

The trainer says there has also been inappropriate contact between staff and minors, as well as between minors.

"We have already caught staff with minors inappropriately," the trainer says. "Is that OK with you guys? I hope not. We have also caught minors with minors, which is, you know—we've got teenagers in this shelter. What's happening with teenagers? Hormones, raging out of control. It's important that we maintain safety and vigilance. Be vigilant. Stop what is happening. If you don't watch these kids, and you're not the one who is going to step in, who's going to? Be that person to stand up for the minors because that's what we're here for."

Children are also being ignored when they request medical care. "Some of the incidents and complaints we're getting also is that we've got minors who are requesting medical due to not feeling well, and staff members are telling them there's nothing wrong with you, go back to your bed," the trainer says. "These are legitimate complaints and it is my duty to let you know what is going on, because if you know who these people are, you need to report them."

Reason obtained another recording of a May 19 town hall–style meeting on health concerns at the shelter, led by Dr. Joseph Hutter, a commander in the U.S. Public Health Service. 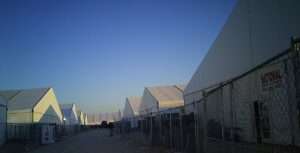 One person at the town hall also brings up a story of a minor being denied medical care. "One of our volunteers was working with a child who was coughing up blood," the person tells Hutter. "She went to her tent and said we need to deal with this, and they said, well, we're going to send them to lunch or dinner. Then they checked with medical, and they said it was a three-and-a-half hour wait to see anybody."

"No one else says 'no,'" Hutter responds. "No one else says 'after lunch.' You let the tent nurse know. Nobody slows down or denies medical care, and if the medical tent is backed up, they can call on reserves. That shouldn't happen."

At the town hall, one person asks Hutter how many minors and staff have contracted COVID-19.

"This is a question, I'll tell you, that is hard to answer," Hutter says. "It has to do with data and transparency. Wouldn't it be nice if you had graphs and charts and hot maps, updated daily and everyone gets it every morning? If that graph is going to The Washington Post every day, it's the only thing we'll be dealing with and politics will take over, perception will take over, and we're about reality, not perception. The reality is the intervention to change the situation is to constantly improve our safety measures."

In the May 22 daily brief to staff, a shelter director notes that the area known as the "COVID Campus" is being renamed "Healing Hill."

Federal employees told Reason that several minors have attempted to escape by jumping the fence that surrounds the shelter. They do not get far, the federal employees noted, since they are still within a military base.

Youth advocates have also described unsanitary conditions at the Fort Bliss shelter. Leecia Welch, senior director of the legal advocacy and child welfare practice at the National Center for Youth Law, toured the tents recently and told The New York Times that they "smelled like a high school locker room" and confirmed that the children were not receiving clean clothes.

"Many of the boys and girls have not been given underwear, particularly ones who've been in COVID isolation," a federal employee says. "After they come out, they're issued new clothes, but no underwear. And very often it's only one set of clothes, so no clothes to change into, and no underwear. When we have asked about it—and I personally escorted some kids to tents to ask how come they can't get underwear—the answer is, well, the contractor is supposed to provide that." 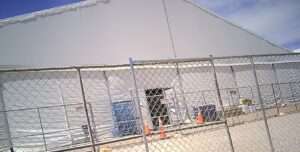 The contractor leading the training sessions also acknowledged the underwear shortage. "Now when it comes to clothing, I do want to let you guys know we are aware there is a shortage of underwear, socks, and shoes, and management knows. We're working on getting more for minors," the trainer says on the tape.

For one federal employee, the excuses are ridiculous. "There is no underwear shortage here in El Paso," the employee says. "I've checked at Walmart and Target. Anybody with a credit card could go and get all of this. And the answer is, everything is being monitored because we don't want there to be waste. The irony is just so rich. With the salaries they're paying us, and rental cars, hotels, per diems, and 72 hours a week—it's just mind-boggling."

The New York Times reported last week that the Biden administration is planning to expand the shelter to hold up to 10,000 minors. Because the shelter is inside a military base, it is not open to the public or press. Neither are any of the other emergency intake shelters. The photos in this story were snapped by a federal employee and passed to Reason despite an absolute prohibition on taking or sharing images imposed by camp officials.

"Secrecy is demanded at a level that might be called for if we were designing the next generation of nuclear subs, and there is absolutely no reason for it," a federal employee says. "One can understand the need to protect the identities of individual children and not allow them to be photographed. But there is no excuse for any of the other secrecy surrounding the operation."

HHS and Chenega did not respond to requests for comment for this story.