Former President Donald Trump and his top trade advisers spent years arguing that tariffs applied to imports from China were not being paid by Americans—despite what economic theories and actual reality suggested.

Since taking office, the Biden administration has picked up that same line of argument. U.S. Trade Representative Katherine Tai said during her confirmation hearing in February that she views tariffs as "a legitimate tool" to wield against China—the obvious implication being that tariffs are applying some sort of economic pressure on China that the Biden White House could use for political purposes, in much the same way as Trump sought to do.

And it gets worse. When China responded to Trump's tariffs by slapping new tariffs on many American goods, American firms paid a significant price. That's because "U.S. exporters, unlike China's exporters, lowered by roughly 50 percent the prices of goods affected by foreign retaliatory tariffs, carrying a much higher cost burden than foreign importers of goods under U.S. tariffs," writes Dima Cvetkova, an associate analyst at Moody's and author of the report.

In other words, American companies ended up on the losing end of the trade war both going and coming. Importers absorbed most of the cost of the Trump tariffs, and American businesses that export to China got hit by the retaliatory tariffs worse than Chinese exporters to the U.S. did.

Prior to 2018, the average American tariff on imports from China was just 3.1 percent, according to data from the Peterson Institute for International Economics. But after Trump hiked tariffs on a wide range of imports covering everything from industrial goods to toys, the average tariff on imports from China is now 19.3 percent. Retaliatory tariffs imposed by China hiked its duties on American-made goods from 8 percent to 20.7 percent.

More than half of the goods traded between the world's two largest economies are now subject to tariffs, according to PIIE data, up from less than 1 percent before the trade war began. The so-called Phase One trade deal inked by the Trump administration and Chinese government in December 2019 (there never was a second phase) barely had any impact on those figures. 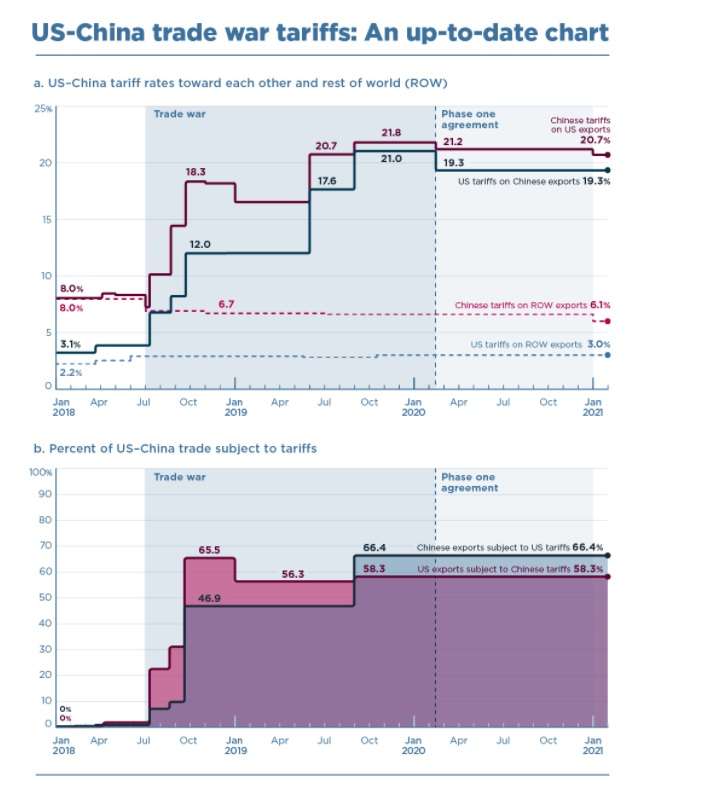 The Moody's report only adds to a growing body of evidence showing that Trump-era tariffs have been a loser for the American economy. According to the American Action Forum, a free market think tank, Trump's tariffs (and retaliatory tariffs imposed by other countries) have increased annual American consumer costs by about $57 billion. The Tax Foundation estimates that Trump's tariffs amount to an $80 billion tax increase on U.S. businesses. And researchers from Columbia University, Princeton University, and the Federal Reserve Bank of New York concluded that the tariff costs "have been passed on entirely to U.S. importers and consumers."

More than three years after Trump launched his trade war and four months after President Joe Biden inherited it, the consequences of the tariffs should no longer be subject to debate. The evidence is overwhelming and one-sided: American consumers are being hammered.

And that will continue, no matter what wishful thinking emerges from the politicians in charge of trade policy. "If the tariffs remain in place, pressure on US retailers will likely rise, leading to a greater pass-through to consumer prices," Moody's warns.

With consumer prices already rising due to a combination of inflation and a possibly overheating economy as the COVID-19 pandemic fades, Biden could easily offer a bit of relief by cutting the tariffs his predecessor imposed. Continuing to fight a losing trade war is both a choice and a mistake.

Broad Vaccine Mandates Are a Serious Violation of Civil Liberties

Virginia's Awful Alcohol Laws Could Finally Get Fixed, Thanks to COVID and Gov. Youngkin

Smile! The IRS Wants You To Send Selfies to a Facial Recognition Company