At a congressional hearing yesterday, Rep. Darrell Issa (R-Calif.) asked Special Presidential Envoy for Climate John Kerry, "Isn't it true the pipelines are more carbon-delivery-efficient than trains or trucks or other forms of delivery?" Kerry responded, "Yeah, that is true. I think that is true, but it doesn't mean you necessarily want to be adding another line when there are other alternatives. But is it better than train, and better than that? Yes, it is."

The envoy is correct.

A 2017 National Bureau of Economic Research study compared the greenhouse gas emissions and spills associated with transporting crude oil from North Dakota to the Gulf Coast via trains and via pipelines. It found that pipelines are much more carbon-delivery-efficient: 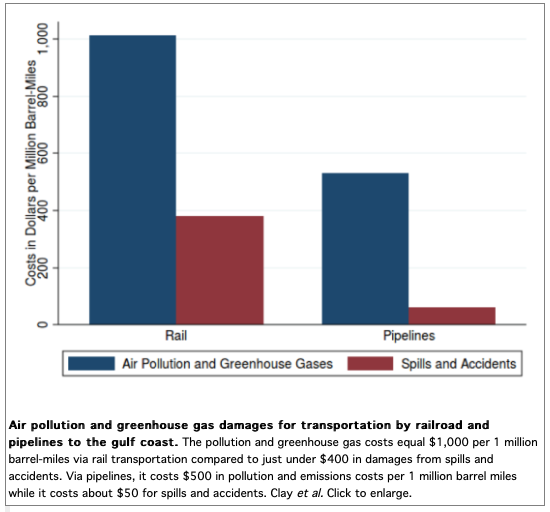 In the wake of the ransomware shutdown of the Colonial Pipeline and the resulting East Coast fuel delivery chaos, some in the Twitterverse and in right-wing media outlets have been accusing Kerry and the Biden administration of hypocrisy, given the president's executive order revoking the permit for the Keystone XL pipeline extension. (The stated aim of the order was to protect the climate from the greenhouse gases that would have been emitted from the burning Canadian tar sands oil.) They have a point, since tar sands crude is now being shipped via rail. There is, however, one relevant difference between the two pipelines: Since the Keystone XL would have transported unrefined tar sands petroleum from Canada to the Gulf Coast refineries, it would have had no direct effect on delivering gasoline, diesel, or jet fuel to consumers in the U.S.

Opponents of the Keystone, Mountain Valley, and Atlantic Coast pipelines used the absurdly convoluted energy infrastructure permitting process to stall and kill those projects. They will rue the day when the same process is deployed against energy supply infrastructure they favor, such as vast wind and solar generation facilities and the extensive new high-voltage power lines that will be needed to transport renewable electricity from remote locations to cities.