Meanwhile, 69 percent of those polled said there should be a way for undocumented immigrants living here to stay in the country legally if they fulfill certain requirements. And 42 percent of survey respondents said they should be provided with a path to citizenship, while 26 percent preferred a path to permanent residency, but not citizenship.

The findings provide an interesting look at how the Trump administration's immigration rhetoric and policies were out of touch with mainstream American opinion.

But they also suggest that four years under President Donald Trump did shift American opinions rightward on immigration. The 69 percent that now support a way for undocumented immigrants to stay is down from 77 percent in March 2017, "with the decrease being driven by shifting attitudes among Republicans," Pew reports.

Not many folks from any political persuasion seem to think the federal government is doing a good job in its immigration policies:

The government receives negative ratings for how it has handled the situation at the border. About two-thirds of U.S. adults (68%) say that the government is doing a very (33%) or somewhat (35%) bad job of dealing with the increased number of people seeking asylum at the country's southern border, while fewer than half as many (29%) say it is doing a very or somewhat good job.

But there's little agreement about what the government should be doing.

And answers to questions about refugees and asylum status suggest the Biden administration—which announced yesterday that it would increase the number of allowed refugees from the 15,000 cap set by Trump to 62,500 for this fiscal year—is also at odds with what Americans want on immigration.

Some 79 percent of people polled by Pew said it's either very (47 percent) or somewhat (32 percent) important to reduce the number of people seeking asylum in the U.S.

A smaller but still significant percentage—57 percent—said it should be harder for asylum seekers to be granted legal status here.

And a full half said it's somewhat or very important for the U.S. to disallow asylum seekers entirely. 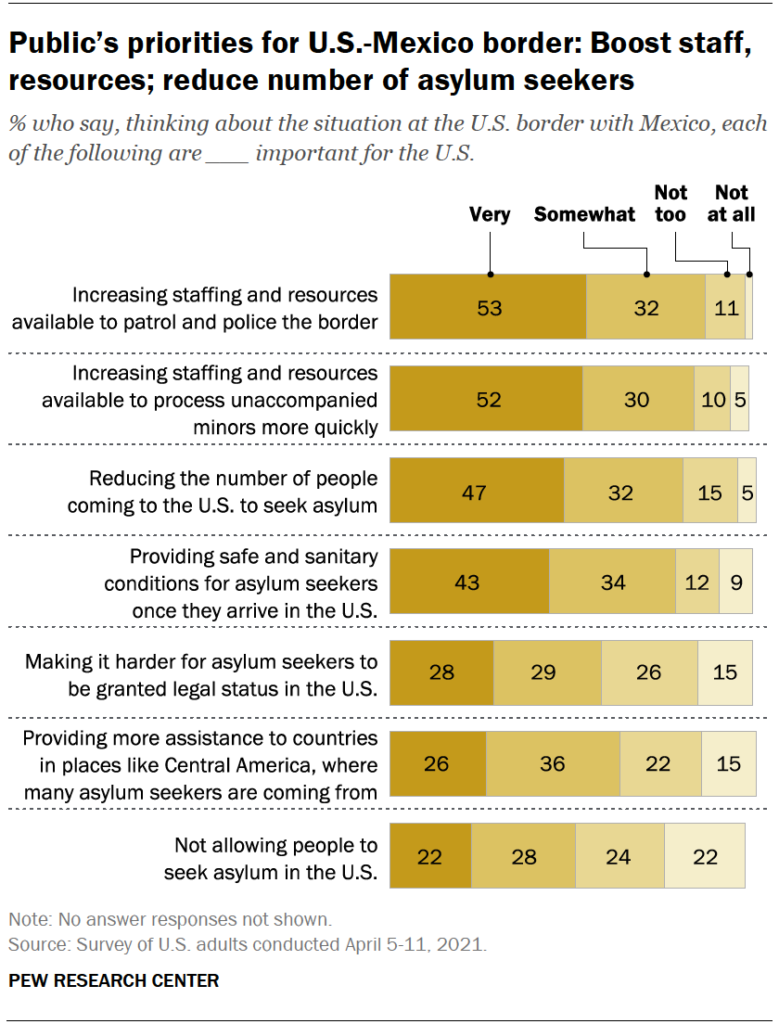 The Pew survey was conducted from April 5 to April 11, 2021, and includes data from 5,109 people, with a margin of error of plus or minus 2.1 percentage points.

In other immigration news: The Biden administration is making progress at cutting the number of unaccompanied minors in federal custody. "The number of unaccompanied children held by Border Patrol has plummeted by 88% since late March, when U.S. migrant holding facilities became severely overcrowded as thousands of minors crossed the southern border alone," reports CBS News.

Animal welfare group files First Amendment lawsuit against veterinary board. The San Francisco Society for the Prevention of Cruelty to Animals (SPCA) is suing the California Veterinary Medical Board for allegedly violating pet owners' and veterinarians' right to free speech. The nonprofit is challenging the board's ban on veterinarians talking to people about their pets' health by phone or by online chat unless the vet has met with the pet owner in person first.

"The California Veterinary Medical Board is suggesting they don't trust veterinarians that they licensed to make sound decisions for animals," Brandy Kuentzel, general counsel to the San Francisco SPCA, said in an emailed statement. "The law not only restricts veterinarians and pet owners' constitutional right to free speech, it also restricts a pet's access to veterinary care."

"People can use telemedicine for themselves and their children, so why not for their pets?" Kuentzel added.

"In order to win, Epic has to convince the judge that Apple has a monopoly with its App Store and abused that market power by forcing Epic (and other developers) to use Apple's payment system," notes Axios. "Apple argues that the relevant market isn't iOS, but rather all the different options players have for games, of which it is just one player."

As for the first day of Epic v. Apple trial, it was off to a rocky start, reports Gizmodo:

First, the court had issues getting both teleconference lines up and running, and even when they were humming along fine, everyone's lines seemed to be unmuted. On the main line, one person chanted, "Epic Games! Epic Games!" Another chimed in, "I'm going to tell my mom, just don't pick up the line," while yet another offered this insightful commentary: "Tim Sweeney better know what he's doing. If he messes up once, we won't have iOS back. This call is live, by the way."

The additional line suffered from the same audio issues as well. About 35 minutes into the hearing, while Epic's legal team was still giving its opening statement, the audio suddenly cut out.…But one audience member figured out he was unmuted.

"FORTNITE SUCKS," that person yelled into the mic. "Yo, yo, yo, we can't hear anything, bro. The audio died or some shit."

New today from @AndrewRCraig:
"Hayek offered what remains the defining statement of libertarianism as something distinct from and often in opposition to the political right."https://t.co/nxsJy0nH1U

• How the U.S. government codified patriarchy.

• Facebook's oversight board will have a decision about Trump's suspended account on Wednesday.

• "The European Commission on Monday proposed easing restrictions on non-essential travel for visitors who have been fully vaccinated against COVID-19," reports Axios.

• Virginia, Illinois, and Nevada are appealing a ruling that they ratified the Equal Rights Amendment (several decades) too late for it to count.