The root of the rumor: a story in the British tabloid the Daily Mail. Noting that Biden wants to slash greenhouse gas emissions, the Mail added that "while Biden hasn't released details on what life could look like for Americans, experts and recent studies have laid out what would need to change by 2030 to reach the goal." The paper then pointed to a random University of Michigan study (released in January 2020) saying that cutting beef consumption by 90 percent while halving other animal product consumption could cut diet-related greenhouse gas emissions in half.*

Biden never cited the study as a blueprint, nor did his administration have anything to do with it. And the Mail didn't actually say as much in its article text, either; rather, it speculated on a range of different ways to drastically reduce emissions. But the headline was a bit more misleading: "How Biden's climate plan could limit you to eat just one burger a MONTH." And that was enough to launch a twisted game of Republican telephone.

On Friday, former director of the National Economic Council Larry Kudlow told Fox News viewers that "Biden announced a 50 percent cut in carbon emissions in only a few years" and that "there's a study coming out of the University of Michigan which says that to meet the Biden Green New Deal targets, America has to, get this, America has to stop eating meat, stop eating poultry and fish, seafood, eggs, dairy, and animal-based fats."

While Kudlow didn't directly attribute the food restrictions to Biden policy, Fox Business implied as much, headlining a story about his comments, "Kudlow: Biden's Green New Deal means no meat for the 4th of July, have grilled Brussels sprouts instead," and adding as a subhead, "Kudlow says Biden's climate plan comes from 'ideological zealots' who don't care about America." 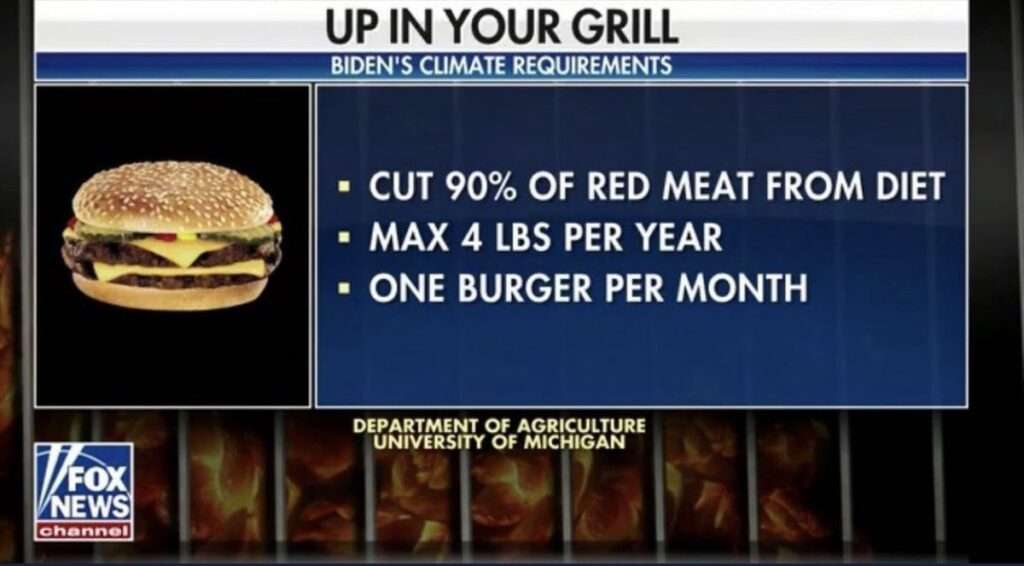 Before long, some of Congress' biggest kooks had taken up the message.

"Joe Biden's climate plan includes cutting 90% of red meat from our diets by 2030. They want to limit us to about four pounds a year," tweeted Rep. Lauren Boebert (R–Colo).

Rep. Marjorie Taylor Greene (R–Ga.) called Biden the Hamburglar, tweeting a photo of him eating burgers under the caption, "No burgers for thee, but just for me."

Sustainable systems researcher Martin Heller, who co-authored the University of Michigan study at the center of this hoopla, told CNN's Daniel Dale he had "no idea what Biden's plan has to say about our diets."

The case stems from the 2010 demands of the California attorney general's office and subsequent arguments from now-Vice President Kamala Harris:

When several nonprofit groups challenged this practice in 2014, then-Attorney General Kamala Harris argued that she needed the information to streamline investigations. She promised that individuals' confidentiality was carefully protected. Neither assertion was true. When the matter came to trial in 2016, state officials conceded that they hardly ever used their database for investigations. And the challengers unearthed tens of thousands of confidential documents, including contributor lists, left unsecured on the attorney general's website.

In a lot of ways, it was already broken."pic.twitter.com/T718QdCscx

• Why is anyone listening to Sen. Amy Klobuchar (D–Minn.) on criminal justice reform?

Why is every cable news outlet having @amyklobuchar on to comment on the Derek Chauvin verdict?

Have they forgotten that as Hennepin County Attorney she declined to prosecute Chauvin when he shot and killed another man, Wayne Reyes, in 2006?https://t.co/maFN7WH93N

• Why prosecutors promising not to prosecute prostitution isn't enough:

This is why we don't get THAT excited when this DA or that one announces they won't prosecute sex workers.

Because they have said before, and it's usually not really TRUE.

And it's never permanent. https://t.co/2iXgVzxJxx

• It's not just U.S. lawmakers who don't understand how the internet works:

Canadian Senate Bill S-203 is another in a long line of morally patronizing legislation that doesn't understand how the internet works. Even if there were a way to keep minors away from sexual content, there is no way without vast collateral damage. https://t.co/ckoph9SRYB

• The Foundation for Individual Rights in Education (FIRE) is fighting for pro-choice students' speech rights:

CORRECTION: This post has been updated to note that the study looked at cutting beef (not all red meat) consumption by 90 percent and all other animal product consumption by 50 percent.