Pandemic weight fluctuations go both ways. A confusingly worded write-up of a survey from the American Psychological Association (APA) and some viral tweets about it have spawned some panic about pandemic weight gain in the U.S. Many have been interpreting the survey to say that Americans have put on an average of 29 pounds during the pandemic, with American millennials putting on an average of 41 pounds. Yikes!

But let's look a little closer. Turns out, these are the averages among people who say they put on unwanted weight—so about 42 percent of the adults surveyed. That's not insignificant, but it's also nowhere near the dire situation the first statistics alone suggest. The average is also significantly higher than the median weight gain among the group that put on unwanted pounds, suggesting some extreme weight gain has seriously inflated the picture here. (The APA says about 10 percent of survey participants gained 50 or more pounds.)

The median weight gain among adults who put on unwanted weight was just 15 pounds—so, a large portion of that same group gained less than 15 pounds.

The youngest adults—Gen Z, which the survey defines as adults ages 24 and under—were the most likely to put on weight, with more than half (52 percent) reporting undesired weight gain.

Forty-eight percent of millennials (ages 25-42 per the survey parameters) put on undesired weight, compared with 41 percent of Gen Xers (ages 43-56) and 37 percent of boomers (ages 57-75). Boomer gainers put on the least new weight compared with other groups, at an average of 16 pounds.

Gen Z and millennials were equally likely—at 22 percent—to report undesired weight loss, compared to 17 percent of Xers and 14 percent of boomers. Weight loss averages among these age cohorts ranged from 22 to 26 pounds.

You can see survey results broken down by some other demographic categories in the chart below. 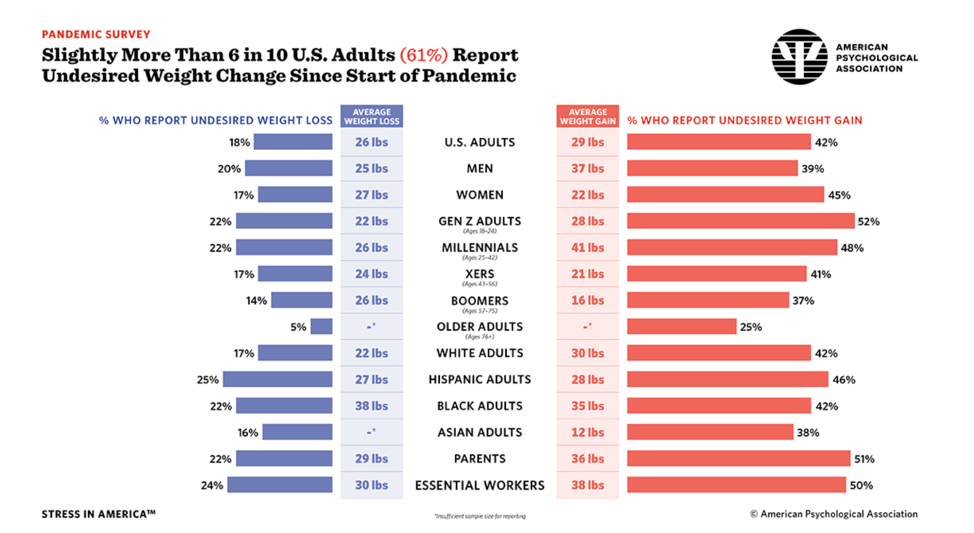 Homeschooling rates have doubled. New data from the U.S. Census Bureau shows the number of children being homeschooled—which does not include virtual instruction through a public or private school program—doubled between spring and fall 2020:

In the first week (April 23-May 5) of Phase 1 of the Household Pulse Survey, about 5.4% of U.S. households with school-aged children reported homeschooling .

By fall, 11.1% of households with school-age children reported homeschooling (Sept. 30-Oct. 12). A clarification was added to the school enrollment question to make sure households were reporting true homeschooling rather than virtual learning through a public or private school.

That change represents an increase of 5.6 percentage points and a doubling of U.S. households that were homeschooling at the start of the 2020-2021 school year compared to the prior year.

The U.S. Postal Service (USPS) is about to get even worse. "Postmaster General Louis DeJoy will unveil the largest rollback of consumer mail services in a generation as part of his 10-year plan for the U.S. Postal Service" The Washington Post reports. The plan is to further cut post office hours, raise postage prices, and allow longer delivery times for first class mail.

"Does it make a difference if it's an extra day to get a letter?" DeJoy asked the House Oversight and Reform Committee in February. "Because something has to change. We cannot keep doing the same thing we're doing."

Battered by people turning to USPS alternatives, DeJoy somehow expects that making government mail service even worse will solve the Postal Service's problems. It's… a take, but probably not a good one.

• A shooter opened fire at a Boulder, Colorado, supermarket on Monday, killing 10 people. "A suspect is in custody," CNN reports, "but authorities did not share any information on his identity, the type of weapon used or any possible motive."

• The Department of Defense is working on draft legislation that could make it easier for military spouses to transfer occupational licenses between states. It's starting with standards for teaching, social work, cosmetology, massage therapy, and dentistry/dental hygiene but "others will follow," the Military Times reports. "All told, Defense Department officials calculate there are about 132,140 active duty spouses in numerous professions that require licensing."

• Journalists continue to be denied access to border facilities for detaining migrant children.