The U.S launched airstrikes Thursday on two compounds in Syria that were allegedly controlled by Iranian militias. A "handful" of enemy combatants were killed in the attacks, U.S. officials told the press.

Pentagon Press Secretary John Kirby confirmed that President Joe Biden ordered the strikes in response to "continuing threats to American and coalition personnel there," according to The New York Times.

It was feared that the militants were part of a weapons smuggling operation, but the Biden administration also wanted to send a message that this sort of thing would not be tolerated, U.S. officials told CNN.

@POTUS dragging the US into Syria's civil war is a huge mistake. I strongly condemn this foolish military adventurism.

While Biden is perhaps not the outspoken hawk that Secretary of State Hillary Clinton was, he did not exactly run for president as a proponent of a humble foreign policy. Indeed, during his decades in Washington, D.C., Biden has supported all sorts of costly, pointless wars, including those in Iraq and Afghanistan. And while he apparently opposed the Obama administration's disastrous intervention in Libya, he was unable to convince his boss to listen to him.

Members of Biden's team certainly had problems with drone strikes when President Donald Trump was the one ordering them. When the Trump administration took out Iranian terrorist Qasem Soleimani, then Sen. Kamala Harris (D–Calif.) panned the move as reckless. In 2017, Jen Psaki—now the White House press secretary—questioned the legal justification for an airstrike on Syria.

Also what is the legal authority for strikes? Assad is a brutal dictator. But Syria is a sovereign country.

Needless to say, these objections will vanish now that a member of Team Blue is in charge. Consider the evolving positions of the author and liberal political activist Amy Siskind. 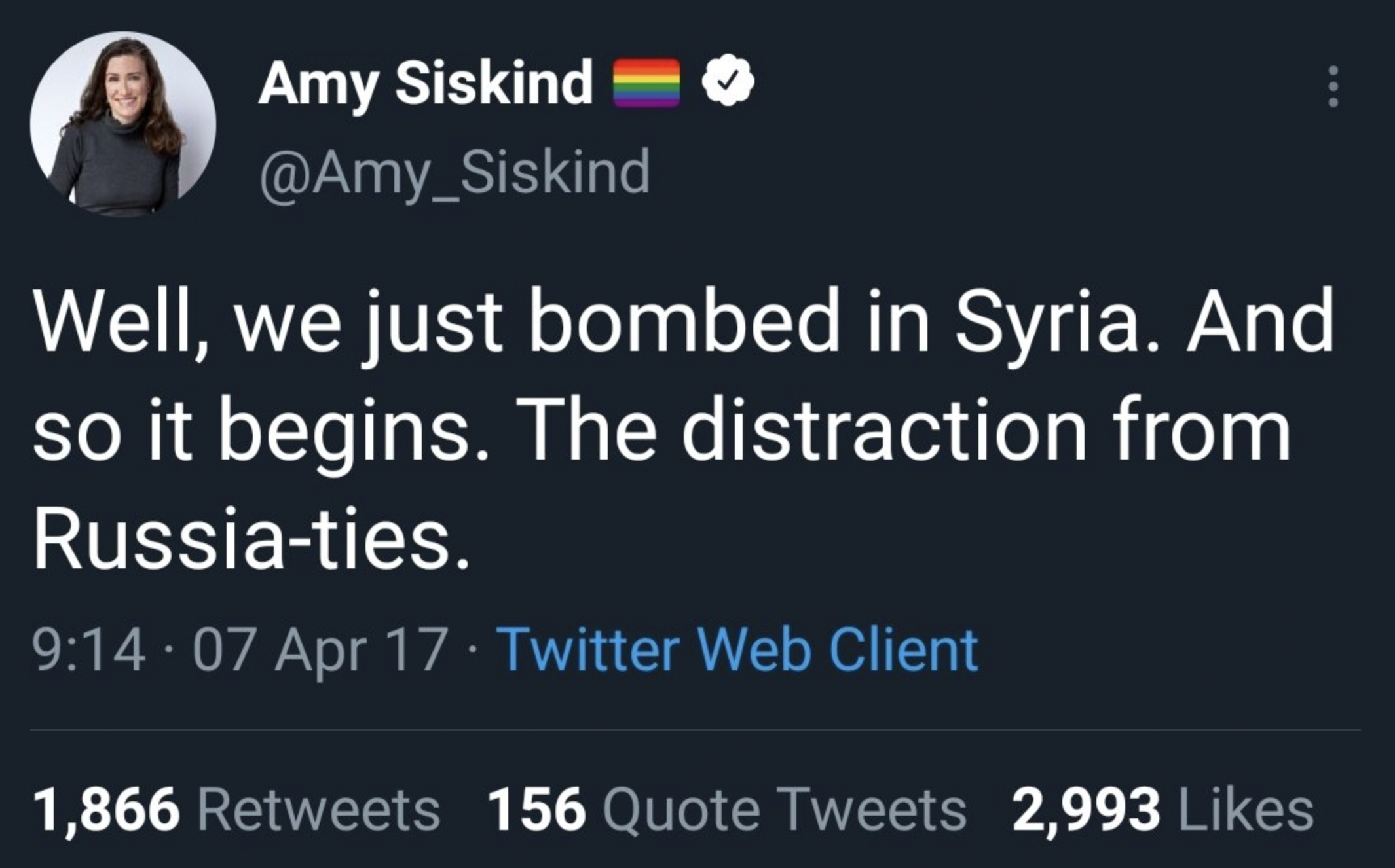 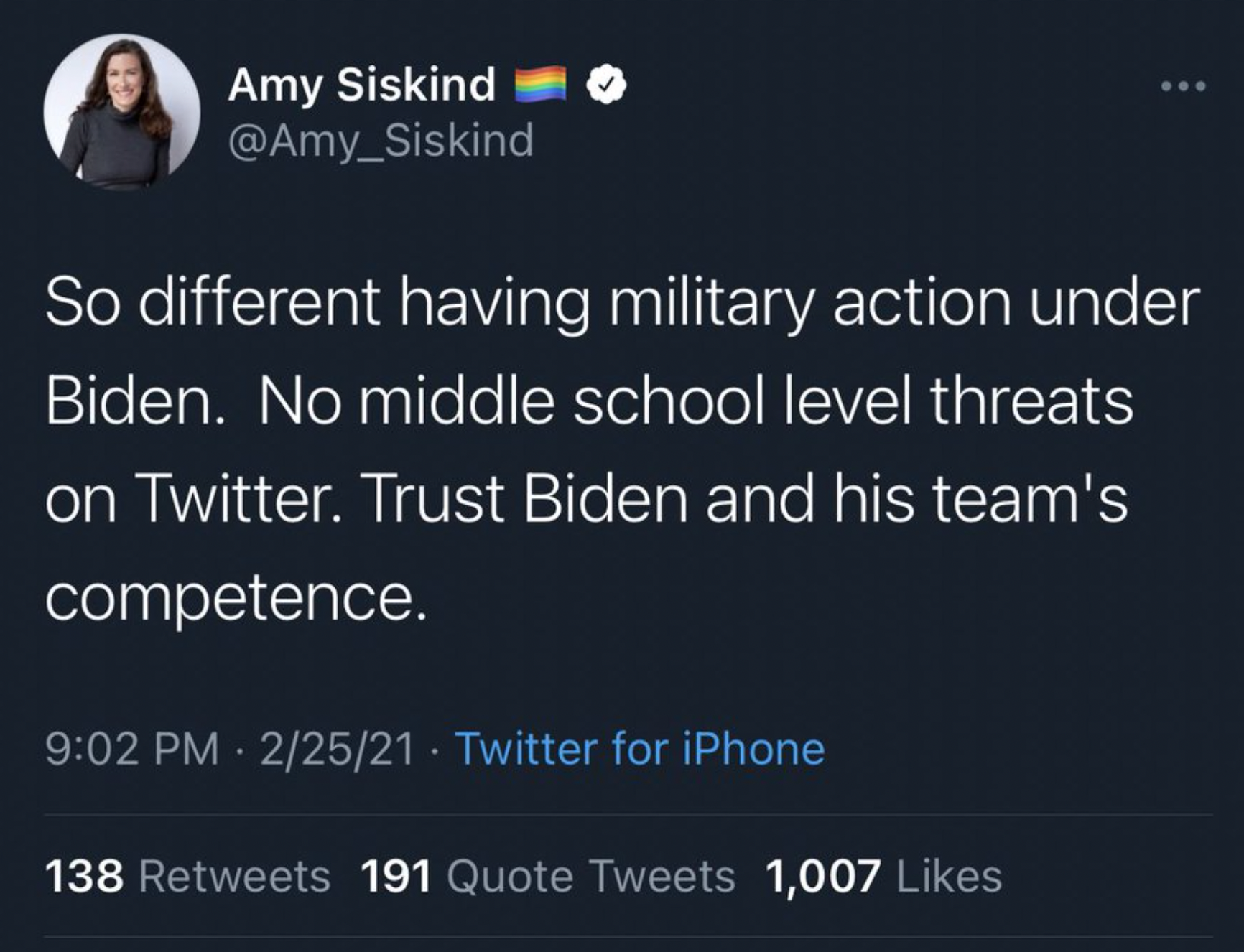 Life comes at you fast.

In the immediate aftermath of the 2020 election, it seemed as if a civil war was brewing within the Republican Party between a faction loyal to Trump at all costs and a faction desperate to be rid of him. The former is best represented by political figures like Sens. Ted Cruz (R–Texas) and Josh Hawley (R–Mo.), while the latter is exemplified by Rep. Liz Cheney (R–Wy.), who supported the second impeachment of Trump for his role in the Capitol riot.

Though the GOP has morphed into a political organization wholly dedicated to Trump over the past four years, it always seemed possible that defeat would strip him of his hold over the party. President George Bush, after all, commanded little loyalty from the Republican faithful in the wake of his successor's defeat in 2008; the circumstances were not exactly analogous since it was John McCain and not Bush who lost, but nevertheless most Republicans were eager to distance themselves from Bush.

The horrific spectacle of January 6, when Trump's bombastic rhetoric and embrace of conspiracy theories resulted in a literal assault on Congress, seemingly gave Trump non-enthusiasts even more ammunition. Trump lost the GOP the House, the Senate, the presidency, as well as its claim to be the party that opposes mob violence.

Last week, Trump released a vicious statement condemning Senate Minority Leader Mitch McConnell (R–Ky.) as "a dour, sullen, and unsmiling hack." If ever there was a time for McConnell to denounce the president, it was now.

But during a Fox News appearance on Thursday night, McConnell was asked whether he would support Trump in 2024 if he is the Republican nominee—and McConnell said "absolutely."

Yes, McConnell qualified the statement by noting that he expected a competitive nominating competition, with several Republican senators planning to run. Yes, McConnell pledged to support Trump in the general election, not necessarily as a primary candidate (though it is difficult to imagine, if not impossible, any major Republican figures endorsing a Trump rival over Trump in the primaries). But come on: It's obvious that if Trump chooses to run in 2024, he is likely to be the nominee, because he still commands the loyalty of a large contingent of GOP voters.

To truly be rid of Trump, GOP leaders would need to take affirmative steps to shun him, at the cost of angering many of their voters in the short term. This is a gamble they are clearly unwilling to take, even as the former president shows nothing but contempt for them.

The Republican Civil War is over before it began. It's Trump's party until the bitter end.

Yidong Chen is a remote student at the University of Illinois. He lives with his mother and rarely leaves home because she is at high risk for a negative COVID-19 health outcome.

But the university requires all students to get tested twice a week—even if they live off-campus and have no plans to physically be at the university. Chen had no idea he was violating campus policy in failing to get tested, but was suspended for a year anyway. According to The College Fix:

Chen is an international student, and the finding against him would have resulted in his and his mother's deportation.

Fortunately for the student, he's a member of the Graduate Employees' Organization, which filed a formal grievance against the university. It also launched a petition demanding UI rescind the punishment and change its practices around the communication of COVID-19 protocols to students.

The petition, which is above 37,000 signatures as of Thursday night, accuses the administration of setting nonsensical rules for remote students who are following COVID safety protocols off-campus. The university requires Chen to "increase the risk to himself, his mother, and the campus community."

The pressure worked and the university readmitted Chen last week, holding his dismissal in "abeyance" as long as he fulfills other requirements, according to Inside Higher Ed. Chen still must kiss the ring by writing two 1,000-word "reflective essays" and completing 25 hours of community service, down from 80 hours in his original punishment.

It's good that the university ultimately relented, but treating Chen like a rule breaker at all is ridiculous. Colleges shouldn't apply their COVID-19 rules in knee-jerk fashion.

Bernie announces his next move: An amendment to take tax deductions away from large corporations that don't pay above $15-an-hour wages. Wants it IN the reconciliation bill

Not to be outdone:

On next steps for minimum wage from Finance Chair @RonWyden: "I'm looking at a tax penalty for mega-corporations that refuse to pay a living wage."