A new study shows that the number of Americans sentenced to life in prison has more than doubled since the early 1990s, even though violent crime declined for the bulk of that period. And before you try to argue that crime was declining because of those stiff sentences, examine the numbers: The drop in crime began well before sentence lengths started skyrocketing. 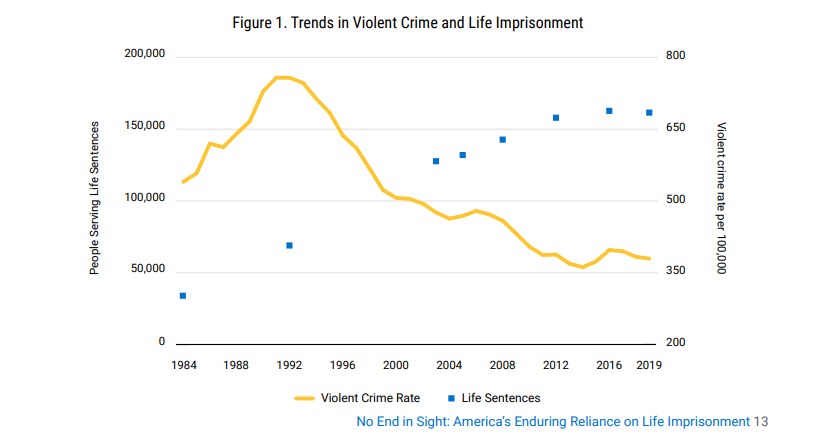 The report was authored by Ashley Nellis, a senior research analyst at the Sentencing Project. It found that one in seven U.S. prisoners—roughly 200,000 people—are currently serving a life sentence. This includes those sentenced to life without parole, life with parole, and virtual life (50-plus years). That is more than twice the number of people handed life sentences than when violent crime peaked in 1992.

"The unyielding expansion of life imprisonment in recent decades transpired because of changes in law, policy, and practice that lengthened sentences and limited parole," writes Nellis. "The downward trend in violence in America that continues today was already underway when the country adopted its most punitive policies, including the rapid expansion of life sentences."

One result of these policies is an aging prison population. A Pew Poll found that from 1996 to 2016, the number of people aged 55 or older in state and federal prisons increased by 280 percent, ballooning from 3 to 11 percent of the total prison population. This trend is even more exaggerated among those with life sentences. Currently, 30 percent of people serving life are 55 or older.

"The number and proportion of aging men and women behind bars began to increase in the mid-1990s, as a result of tough-on-crime laws—mandatory minimum sentences, 'three strikes,' and life sentences," Human Rights Watch reports. "Parole was eliminated in many places, and even where it exists, the criteria for release are too narrow and officials are reluctant to use it fully."

Nellis argues that elderly prisoners who are serving life sentences have often been incarcerated for decades and have aged past the point of threatening public safety.

"Analysis of Bureau of Justice Statistics data shows the peak age of arrest for robbery is 19, declining by more than half by the late twenties," Nellis writes. "Likewise, the peak age for murder is 20, a rate that is more than halved by one's 30s and is less than one quarter of its peak by one's 40s."

Nellis points out that even among the small number of prisoners considered chronic offenders—that is, people who have committed multiple serious crimes—most no longer engage in criminal behavior after their late 30s.

Medical conditions associated with aging tend to develop sooner in prison, Nellis says. Imprisoned people are diagnosed with disproportionately high rates of cancer, arthritis, hypertension, dementia, and declines in mental health. Older prisoners are also vulnerable to violence and victimization from younger ones.

"The urgency of this crisis grows ever greater as the COVID-19 pandemic disproportionately jeopardizes the lives of older Americans in prison," Nellis argues. "Reoffending by persons released after serving long terms is rare, making the need for expediting releases for older lifers the only humane public health and public safety approach."

In addition to the humanitarian issues, there is a fiscal cost to incarcerating the elderly. Federal facilities spend five times more on medical treatment for older people. At the state level, the median cost per prisoner is 37 percent higher in the 10 states with the highest share of inmates 55 and older.

Because more than half of those incarcerated are serving sentences for violent crimes, many sentence reform proposals fall short by focusing on low-level and nonviolent crimes, says Nellis. To address this, her report suggests capping sentences at 20 years "except in rare circumstances based on individualized determination"—with the determination based on the individual's behavior in prison.