I was standing outside the state capitol in Harrisburg, Pennsylvania, where gun-toting defenders of President Donald Trump were supposedly going to start marching at noon. I could see cops, I could see National Guardsmen, and I could see dozens of reporters, but actual protesters were scarce. I did spot a fellow in a Gadsden Flag facemask and a woman whose shirt displayed a slogan about rebellion against tyranny, and as they passed behind me I heard him crack a joke: "I should walk up to the photographers here and say, 'Excuse me, can you direct me to the armed insurrection?'"

In the wake of the recent riot at the U.S. Capitol, a widely circulated flier had called for armed marches at every state capitol on January 17. That sounded pretty dubious—all 50 states? even the most solidly blue ones?—but it seemed plausible that someone would show up somewhere, and of the capital cities that I can reach within 90 minutes I figured Harrisburg was the most likely to attract a crowd. The day before, working from a list of upcoming protests that a security firm had been circulating, I had gone to a demo in Westminster, Maryland; it had turned out to be a liberal protest, and not a particularly big or rowdy one. Now I was in Harrisburg, and the first actual protesters to show up were, again, some liberals: A local activist named Gene Stilp and one or two assistants had arrived with a cardboard statue of Donald Trump, which they made a show of toppling for a crowd of photographers. 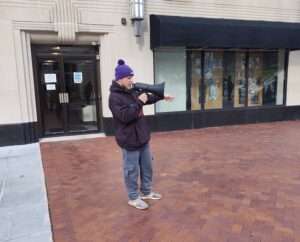 I did, before that, run into a guy named Eddie with a bunch of "Biden Is Not My President" t-shirts that he'd been hoping to hawk to the marchers. Another t-shirt salesman, who had driven down from Pittsburgh, said he'd been under the impression that this was going to be a Second Amendment march, not an election thing. (He might do better tomorrow in Richmond, Virginia, where he plans to set up shop among the gun-rights activists in town for Lobby Day.) A bona fide pro-Trump protester did eventually show up, with a "Fraud 2020" sweatshirt and a megaphone. The general sentiment in his circles, he said, was that the military was going to be out on the street today and that the area was therefore best avoided. But he had decided to head over anyway and represent the That-election-was-probably-stolen-and-did-you-know-that-antifa-infiltrated-the-crowd-at-the-U.S.-Capitol? perspective.

This sparseness did not seem to be unusual: From Salem, Oregon, to Nashville, Tennessee, reports were rolling in of not-quite-demonstrations where the journalists outnumbered the demonstrators. Even the larger protests—like the one in Columbus, Ohio, which the Statehouse News Bureau described as "odd but peaceful"—didn't seem to have drawn more than a few dozen marchers. And the protesters weren't all playing to type either: In Salem, where a handful of folks from the anti-government boogaloo movement had shown up, one brought a sign that said "Fuck Trump" as well as "Fuck Biden."

In Harrisburg, the biggest story was all the reporters looking for a story. If you had opinions you wanted to get into the news, this was your golden opportunity. The man in the Fraud 2020 sweatshirt held court for a while, answering reporters' questions through his megaphone. A black guy berated the cops guarding the capitol building, then announced to everyone present that the real white supremacists were those officers on the other side of the barricade. And the dude in the Gadsden Flag mask wound up holding a little press conference on the Capitol steps. This gradually revealed that—as is often the case at protests, left or right—his politics weren't as predictable as you might have guessed: He thought Trump on balance had been a good president, but he had also supported impeachment over the Ukraine scandal.

While he was talking, the wind nearly blew the barricade over, to the crowd's amusement. "Can you arrest God?" someone asked. I'm not completely sure, but I think even one of the cops might have laughed.