"Human activity has wiped out two-thirds of the world's wildlife since 1970," CNN reported on September 10. Later that month, The Guardian reported that "40 percent of [the] world's plant species [are] at risk of extinction."

In an even more worrisome article, published by Proceedings of the National Academy of Sciences in July, Stanford biologist Paul Ehrlich and his colleagues asserted that "the ongoing sixth mass extinction may be the most serious environmental threat to the persistence of civilization." Around the same time, The Daily Mail warned that "human civilization stands a 90 percent chance of collapse within decades due to deforestation."

These dire calculations and projections come from authoritative-sounding reports issued by international agencies, conservation groups, and peer-reviewed scientific journals. But is the future of wild nature and human civilization really so bleak?

Not according to the demographic and ecological trends that Marian Tupy and I describe in our book Ten Global Trends Every Smart Person Should Know (Cato Institute). Data from uncontroversial mainstream sources strongly indicate that both humanity and the natural world are likely to be flourishing rather than collapsing at the end of this century.

World population, today about 7.7 billion, likely will peak at 8.9 billion by 2060 and decline to 7.8 billion by the end of this century. This projection is based on the fact that women around the world are choosing to have fewer children, causing the global average fertility rate (the number of children per woman of childbearing age) to plummet from 5 in 1960 to 2.4 now.

According to a July analysis in The Lancet, that rate will fall to 1.5 by the end of this century. Other global trends—such as steeply falling child mortality rates, increased urbanization, rising incomes, expanding education of women, and the spread of political and economic freedom—all strongly correlate with the choice to have fewer children.

Human ingenuity, enlarged through free markets, is also enabling us to get ever more goods and services from fewer and fewer resources. Arnulf Grubler, an energy researcher with the International Institute for Applied Systems Analysis, documents how modern smartphones "dematerialized" computers, calculators, cameras, televisions, radios, recorders, and many more gadgets, replacing equipment weighing a combined 57 pounds and using 72 watts of stand-by energy with a device that weighs 2 ounces and uses 2.5 watts. In recent research, Grubler outlines a scenario in which a larger and richer world population using disruptive social and technological innovations reduces the amount of food, fuel, metals, and minerals that humanity annually consumes from about 100 gigatons now to 83 gigatons by 2050.

Humanity is becoming an urban species, and that's good for the environment, since city dwellers generally use less electricity, emit less globe-warming carbon dioxide, and have smaller land footprints than people living in the countryside. Today, about 55 percent of the world's 7.7 billion people live in cities. That means about 3.5 billion still live on the landscape, many as subsistence farmers. By 2100, demographers project that 85 percent of people will be city dwellers, which would leave only 1.2 billion still living in the countryside.

The amount of farmland needed to sustain humanity peaked at the beginning of this century, according to data from the Organisation for Economic Co-operation and Development. Considering that agriculture is the most expansive and intensive way in which people transform natural landscapes, that is really good news for other species. The trend will reinforce ongoing depopulation of rural areas, freeing up ever greater swaths of land. In a reasonably optimistic scenario, increases in crop productivity will allow nearly 1 billion acres of farmland to revert to nature by 2060. That's an area almost twice the size of the United States east of the Mississippi River.

Aquaculture is already supplying about half of the fish that humanity consumes. Much as rising crop productivity is freeing up land for nature, fish farming could help relieve pressure on overfished wild stocks in our oceans, lakes, and rivers. At the same time, awarding secure property rights to fishers would incentivize them to safeguard stocks, making the fisheries sustainable. As a result of such privatization in Iceland and New Zealand, their fish stocks, which had been declining, are now on the rise.

Developed land is already reverting to nature. In 2018, researchers at the University of Maryland reported that the global tree canopy increased by 865,000 square miles between 1982 and 2016. That's a land area larger than Alaska and Montana combined. Using satellite data to track the changes in various land covers, the researchers found that gains in forest area in the temperate, subtropical, and boreal climatic zones are offsetting declines in the tropics.

Forest area is expanding even as areas of bare ground and short vegetation are shrinking. Furthermore, forests in mountainous regions are expanding as climate warming enables trees to grow at higher altitudes. A 2011 study found that global forest growth and regrowth act as a carbon sink, annually taking from the atmosphere between one-fourth and one-third of the total carbon dioxide emitted by the burning of fossil fuels. 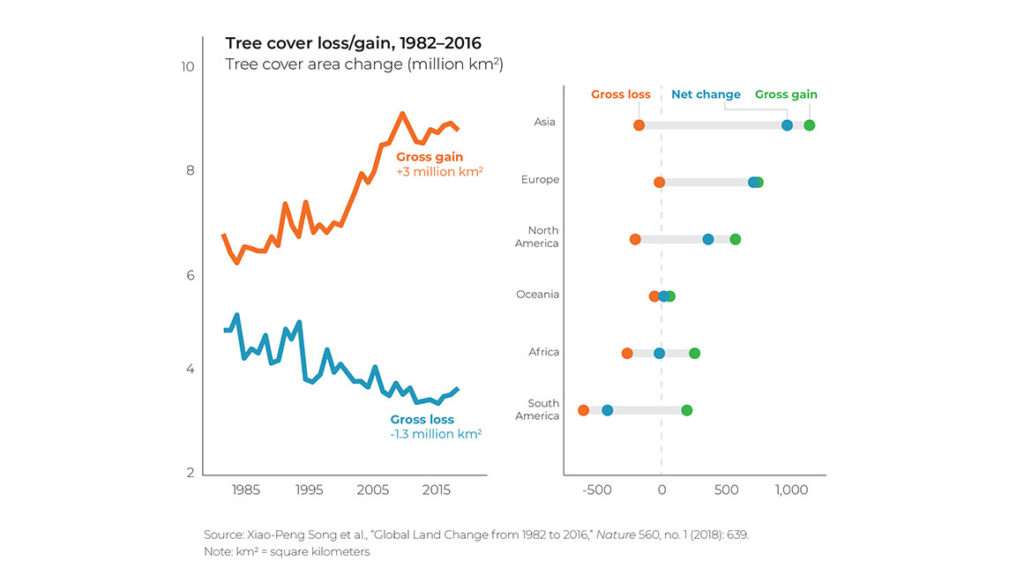 The tree canopy in Europe, including European Russia, has increased by 35 percent since 1982—the greatest gain among all continents. The Maryland researchers attribute much of that increase to "natural afforestation on abandoned agricultural land," which has been "a common process in Eastern Europe after the collapse of the Soviet Union." The tree canopy in the United States and China has increased by 15 percent and 34 percent, respectively, since 1982.

Governments began formally setting aside protected parks and nature preserves in the late 19th century. The Yosemite Valley was dedicated in 1864 as a California state park, while Yellowstone National Park was established as the world's first national park in 1872. As of 2018, according to a global database, protected areas covered about 15 percent of the earth's land surface: about 7.7 million square miles. That area is nearly double the size of the entire United States. Marine protected areas now include more than 10 million square miles, nearly 7 percent of the global ocean and more than double the size of South America.

Humanity does face big environmental challenges in the coming century. But the bulk of scientific and economic evidence shows that most of the trends are positive or can be turned in a positive direction by human ingenuity. Rather than an age of extinction, the 21st century promises to be an era of environmental renewal.