"At what point does this get ridiculous?" asked Judge Andrew P. Gordon of the U.S. District Court for the District of Nevada, who is hearing one of at least 18 cases nationwide challenging some facet of the presidential election results. He's not alone among judges in expressing frustration with lawsuits filed by the Trump 2020 campaign and its allies alleging various forms of voter fraud in battleground states that Trump lost.

"In court hearings and opinions around the country, judges are voicing similar frustrations with the Trump campaign's legal filings to a degree rarely seen in venues where political rhetoric is generally unwelcome," reports ABC News.

"I am asking you a specific question, and I am looking for a specific answer. Are you claiming that there is any fraud in connection with these 592 disputed ballots?" said Haaz, a Democrat.

"To my knowledge at present, no," Goldstein replied.

Election experts "decidedly contradicted" Republican-submitted "affidavits from election challengers who paint a picture of sinister fraudulent activities occurring both openly in the TCF Center and under the cloak of darkness," wrote Michigan Chief Judge Timothy M. Kenny of the Wayne County Circuit Court. Kenny rejected a request for an independent audit (outside of the official one being undertaken by the county) of some votes.

And here's an update on Pennsylvania ballots from state Lieutenant Governor John Fetterman:

And now: "Trump's campaign dropped the allegation that 100's of thousands of mail-in ballots.. that poll watchers weren't allowed."

The Trump campaign "has dramatically scaled back its federal lawsuit challenging the election results in Pennsylvania," notes Politico, "dropping legal claims stemming from observers who assert they were blocked from viewing vote-counting in counties dominated by Democrats."

Last Wednesday in Nevada, "a state court legal fight to stop the counting of mail ballots in the Las Vegas area has ended after the Nevada Supreme Court dismissed an appeal by the Donald Trump campaign and the state Republican party, at their request."

But while the legal hits keep coming for Trump and his allies, the president and his staunchest supporters have grown more enthusiastic in public, evidence-free assertions of a stolen election.

Over the weekend, thousands of Trump supporters marched in D.C. for the "Million MAGA March." 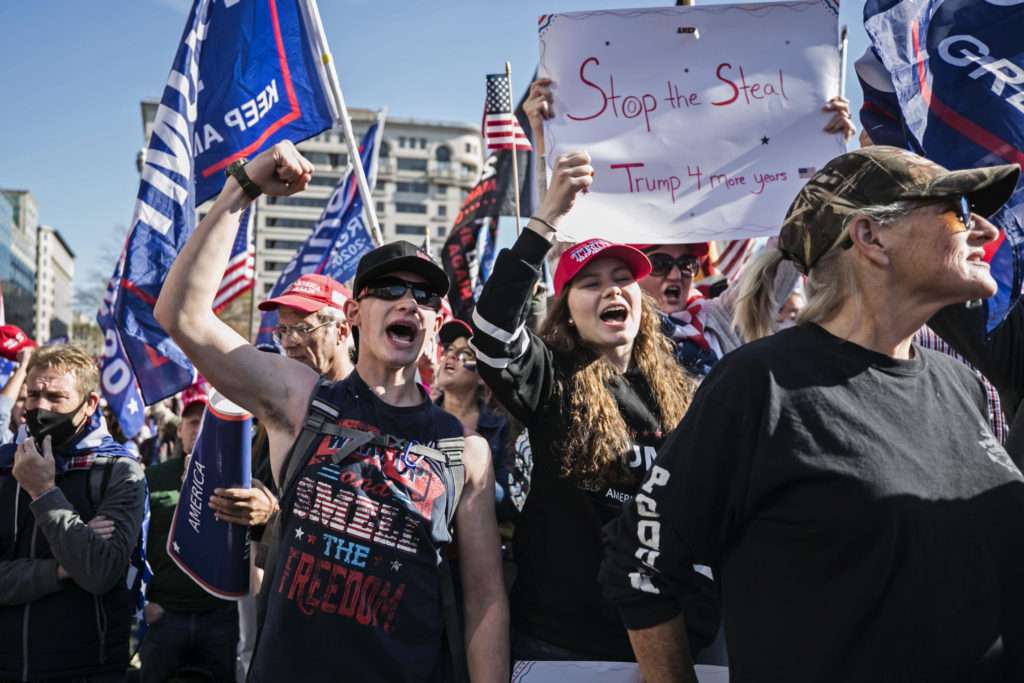 With no evidence of actual election fraud and erstwhile allies in the Republican Party and on Fox News refusing to play along, Trump has been blaming a conspiracy of Democrats, media, and voting machinery. On Sunday evening, he tweeted:

Why does the Fake News Media continuously assume that Joe Biden will ascend to the Presidency, not even allowing our side to show, which we are just getting ready to do, how badly shattered and violated our great Constitution has been in the 2020 Election. It was attacked,..

From large numbers of Poll Watchers that were thrown out of vote counting rooms in many of our States, to millions of ballots that have been altered by Democrats, only for Democrats, to voting after the Election was over, to using Radical Left ….owned Dominion Voting Systems, turned down by Texas and many others because it was not good or secure, those responsible for the safeguarding of our Constitution cannot allow the Fake results of the 2020 Mail-In Election to stand. The World is watching!

I WON THE ELECTION!

To which Twitter affixed a memo stating, "Official sources called this election differently."

People on Twitter have made a meme out of it, quote tweeting the president with their own obviously untrue captions. It's a bit odd to see so much shrugging and casual mockery in response to Trump's unprecedented disrespect for constitutional and procedural norms. (And—while it may be trite to say at this point—it's still true that the way we would react to this playing out the same way in another country would be much different.) But what else can be done at this point? And what really needs to be done?

Trump has been tweeting totally unsubstantiated election fraud claims in increasingly hysterical tones for days, while U.S. institutions, including federal courts and—outside of some especially sycophantic Trump supporters in Congress and MAGA grifter world—Republican leaders have been refusing to indulge the president's tantrum. Biden will, for better and worse, be the next president, no matter what Trump tweets. This may not render Trump's antics harmless, since some people will unwaveringly believe them forevermore. But people generally refusing to give them a power they don't have is probably the right approach, in terms of preserving everyone's sanity as well as preventing Democrats from overplaying this to their advantage ("fascism is here; give now!", etc.) and thwarting future Trumpian GOP claims that everyone else was hysterical during this period and the president was merely calling for a fair and cautious reading of election results.

• A second COVID-19 vaccine is showing promising results. Moderna's vaccine "was 94.5% effective at protecting people from Covid-19 in an early look at pivotal study results," reports The Wall Street Journal. "Of 95 people in the study who developed Covid-19 with symptoms so far, 90 had received a placebo and only five Moderna's vaccine, the company said Monday. The findings move the vaccine closer to wide use, because they indicate it is effective at preventing disease that causes symptoms, including severe cases."

• More on the illegitimacy of acting Department of Homeland Security Secretary Chad Wolf: U.S. District Judge Nicholas G. Garaufis has "ruled that acting homeland security secretary Chad Wolf lacked the authority to limit the work permits of hundreds of thousands of undocumented immigrants who came to the United States as children because his appointment to the top position in the department did not appear to be lawful."

•  The Biden Cancer Initiative "gave out no money to research, and spent most of its contributions on staff salaries," reports the New York Post.

• "The FCC lacks authority to implement rulemaking on Section 230," argues Brandie Nonnecke, director of the CITRIS Policy Lab at the University of California, Berkeley and a human rights policy fellow Harvard's Carr Center.

• The battle over student loan debt is about to come back in a big way:

I think Dems are wildly underestimating the intensity of anger college loan cancelation is going to provoke. Those with college debt will be thrilled, of course. But lots and lots of people who didn't go to college or who worked to pay off their debts? Gonna be bad. https://t.co/SCxdIekT0P