"WHOEVER THEY VOTE FOR, WE ARE UNGOVERNABLE," reads one of the flyers for the event taking place the day after the presidential election, organized in part by the PNW Youth Liberation Front. The idea that activists in Portland, at least the kind we see breaking windows and spitting in cops' faces, are in the bag for the Democrats is a product of binary thinking. Sure, they hate the president, but anyone willing to be disabused of the notion that they prefer liberalism can check out their tweet at 11:30 p.m. on election night—"Fuck Trump, Fuck Biden, death to America! We want something better than this trash, and we're going to take it."

The first step to "taking it" begins in Portland's North Park Blocks at 2 p.m., though at start time it's not more than people in street clothes carrying stockpots of soup and cases of water out of minivans and setting up folding tables featuring flyers like, "Are You An Anarchist? (the answer may surprise you!)."

By 3:30, a guy on the mic is talking about best practices when you are arrested, especially the importance of filming every encounter with the police.

The maybe 150 people in attendance react with ennui; it's likely they've heard it before. Many of them have been in the streets at least since May 27 and while there have been more than 1,000 arrests, very few—owing to new rules by the district attorney—have stuck. That there is little fear of consequence, maybe, adds to the general lassitude.

If the crowd grows more animated when a young man named Truth explains why he voted for Biden—"With this election, I chose who I wanted to fight…I would much rather to fight a feeble-minded neoliberal than a narcissistic racist neo-fascist."—it's pretty clear politics bores them, too, but that what animates them is the fight, the release that comes with screaming in people's faces and breaking whatever is at hand.

Still, anarchy needs fuel; where to get it? From the uniform, evidently—the head-to-toe black covering that today strikes me as unfathomably sad, a squandering of youth and beauty they will never get back. The repetition of engagement is likewise depressing, the same mission night after night, the same sloganeering, the same objects of hatred: Mayor Ted Wheeler and the Portland police. If the protesters show remarkable tolerance for repetition, for the endless spray painting of FUCK TED and the chanting of, "All Cops Are Bastards—ACAB!", there is less willingness to try anything new, or not more new than infusing the same actions with more violence. 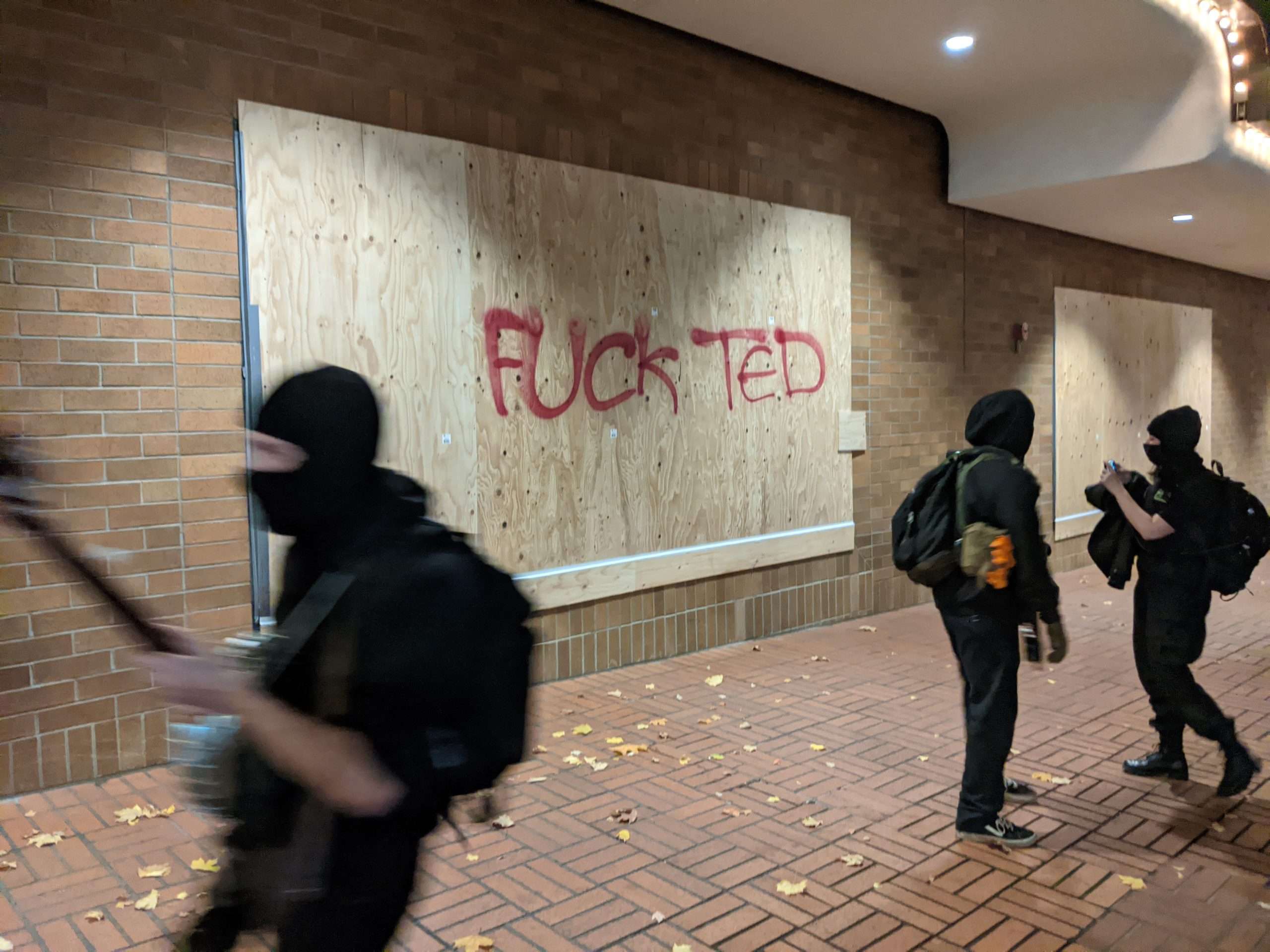 The anticipation of which you can feel as the clock ticks toward 5 p.m., as the music in the back of a pickup bumps up, and a murder of crows, just visible above the tall oaks, circles and caws in a way that might, if one is feeling poetic, seem eerie or ominous.

But there's no poetry—it's the same marching; the same slogans; the same shining of high-beam flashlights into people's apartments; the same marching down Burnside, turning up Broadway; the same motorcycle riders clearing anyone up ahead; the same pickup trucks protecting the now maybe 400 protesters as they pass the venerable strip club Mary's Club and the luxury Benson Hotel, which claims to have hosted "every U.S. president since William H. Taft." Then they turn east, passing the Apple Store, which months ago tried to proactively protect its tall glass windows with plywood painted with pro-Black Lives Matter imagery. No luck: The protesters just threw the rocks higher. 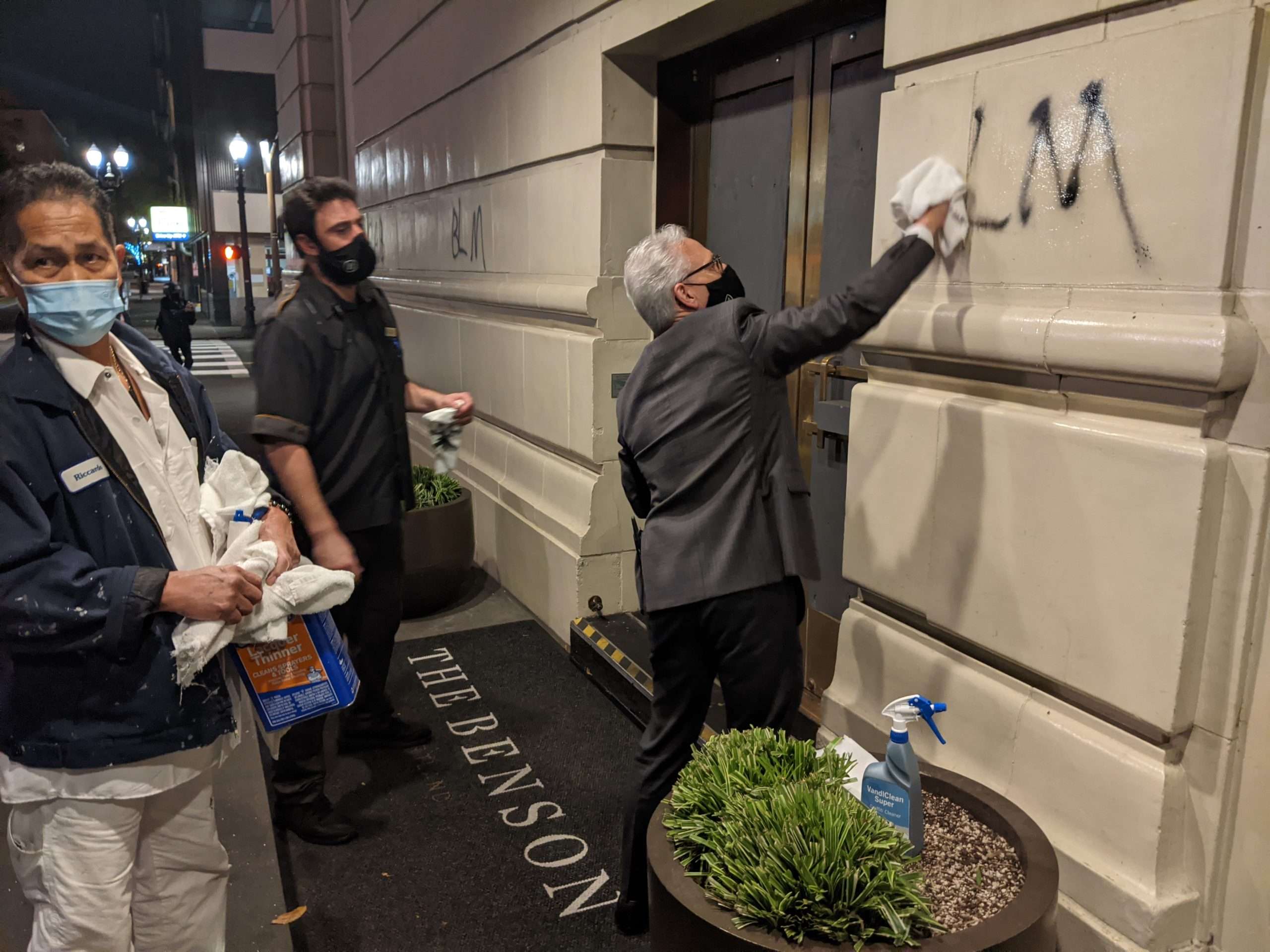 "Check it out," my friend says, as a guy playing a banjo and his friend pass. They are each carrying rifles, not the usual M.O. of the antifa/BLM crew. Maybe I am wrong about their being unwilling to try anything new. Later, these two will tell me that they are here to protect people; that the other side—meaning, in their telling, the Proud Boys, though there do not appear to be any Proud Boys around tonight—have guns and they need to, too.

"We've started carrying in Portland and overall, we've gotten a great reception," says banjo player, who hands his rifle to another friend so he can strum a few chords. "It's nothing to be ashamed of, also, not everyone should do it. As long as you're cool-headed and know what you're doing."

Two minutes from the Apple Store, past an uncounted number of street tents and several piles of fresh vomit, the protesters intersect with a second protest, people holding "EVERY VOTE COUNTS" signs and a drumline and hundreds marching south, to where a bandstand of sorts is set up, with a deejay and messages of unity beamed onto the wall overlooking the Willamette River. This second event, put on by the Defend Democracy Coalition, kicks off with a heavyset man on the mic.

"Stop standing separately and get the fuck over here!" shouts the man in the direction of the antifa/BLM crew, who've parked themselves on the sidewalk across the street and do not, despite the man's entreaty that, "What we need to do is unify right now. Stop the fucking drama," show any sign of moving.

The speakers—a rabbi, a member of a local native tribe, a longtime black activist—all talk of better understanding, of the work they have done for decades, of pulling together with resilience. By the time the native woman has counseled us to "keep respect in your heart for other people and more than anything, give the love," the crew across the street is on the move, marching west, greeted, as they pass Voodoo Donuts, by a canned message from a cop car up the block.

And then, quicker than I've seen before, the protesters and the cops are gone, with the exception of one almost child-size black bloc member, who films us from behind and then scoots around a corner.

"They're over by the Benson," says my friend, who's got a tracker of sorts on her phone.

"It's such a shame," says a uniformed employee of the hotel, scrubbing freshly sprayed "ACAB" and "BLM" graffiti off the outside wall. "I asked the guy to stop, and he's just such a jerk. 'Oh, you guys are in business, you can afford it, it's no problem.' Yeah, right."

But for an antifa medic truck—a pickup with its front bumper falling off—there is no sign of the protesters, but we can hear them, can hear shouts and sirens. One more corner turn and there are dozens of police and sheriff vehicles with their lights blazing, parked alongside a strip of stores whose plate glass windows have just now been smashed in, including Wildfang, an apparel store whose tagline is "f*cking with gender stereotypes since 2013," and in whose window, or what remains of its window, hangs the message, "HATE CANNOT DRIVE OUT HATE. ONLY LOVE CAN DO THAT—MLK."

"When I heard [them] coming this way, I kind of just sat across the street and kind of watched it happen, because there was no way I could stop it," says Ryan, who works at Wildfang and who now stands in a pile of broken glass and waits for the plywood people to arrive. "So hammers and rocks and anything they can use to just [break] our windows as they ran by," he adds. "And there was nothing the police can do because they're running."

Ryan estimates there were more than a hundred of them, some of whom are currently around the corner, slipping on piles of broken glass as the police press in on them.

"PUT YOUR MASKS ON, YOU MURDERERS!" a protester shouts from inside the melee.

A guy looking at Wildfang's broken windows says to his friend, "Who would do anything like this?"

The haw-haw-haw in his voice is unmistakable. I go up to the guy and point out Ryan, tell him that he works at Wildfang, that he might have a family—

"Who the fuck are you? Get the fuck out of my face," says the guy, who wears a mask with the words, I CAN'T BREATHE, which, to be honest, is pretty clever, even if his level of discourse is not—a not unexceptional occurrence when trying to talk with the antifa/BLM crew: You ask questions, they tell you to go fuck yourself. Which tells me they either have no interest in engaging or are incapable of doing so, in which case, I have only their actions to show me their intentions. So far, what they've mastered seems little more than what the toddler knows, how to smash and how to scream.

I turn from the guy telling me to go fuck myself to find three young people filming me with their phones, asking me questions, making accusations, telling me variously that they know who I am and that they've never heard of me, all in a kind of snotty tone. I can understand how someone would find this intimidating. I find it boring, as is—no disrespect intended—what happens as soon as the police move out, the burning of an American flag. Every night it's the same show, making one wonder when they will get some new ideas, when they might tilt toward joy, when they will become capable of building as avidly as they destroy.