The next debate between President Donald Trump and former Vice President Joe Biden is supposed to take place in a week, but a shift to a virtual town hall has Trump threatening not to show up.

This morning, the Commission on Presidential Debates announced that the next debate would not take place in person as planned. In order to "protect the health and safety of all involved" the commission decided that the Oct. 15 debate, which is going to look more like a town hall than a traditional debate, will host the candidates remotely, while moderator and veteran C-SPAN reporter Steve Scully will oversee the debate as planned from Miami.

Trump's recent COVID-19 diagnosis—and the spread of the virus among those close to Trump—would seem to make an in-person debate unnecessarily risky. Nevertheless, Trump this morning told Fox News that he would not participate in the debate if it were virtual.

"The commission changed the debate style and that's not acceptable to us," Trump told Maria Bartiromo on Fox News this morning. "I'm not going to waste my time at a virtual debate." He also complained that he'd have to sit behind a computer for a virtual debate and that the moderator would be able to cut him off, likely alluding to comments from the commission following last week's debate that they'd add "tools to maintain order" to stop Trump's frequent interruptions of Biden.

Trump instead said he'd be back on the campaign trail again. Listen below:

Biden's campaign has responded that he'll plan to answer voter's questions on his own Oct. 15 but also requested that the town hall debate be rescheduled for Oct. 22: 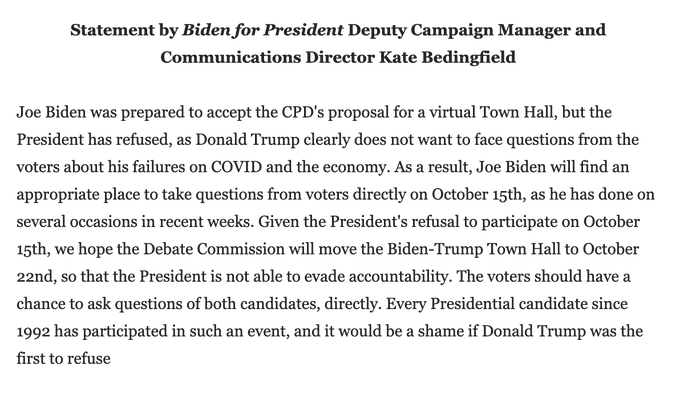 Subsequently, Trump's campaign also agreed to pushing the next debate to Oct. 22:

Trump campaign manager Bill Stepien issues a new statement saying they agree to delaying the second debate by a week so it can be in person. "We agree that this should happen on October 22, and accordingly, the third debate should then be shifted back one week to October 29."

CNN notes that it's not unheard of for a president to refuse to participate in a debate. President Jimmy Carter refused the first debate in 1980, in part because independent candidate John B. Anderson had also been invited. If Trump refuses to participate, maybe the commission should consider allowing third-party candidates to answer a few questions. Actually, they should consider doing that anyway.

Evening update: The Trump campaign is now insisting that Trump will be medically cleared to attend the debate in person next week and wants it to go on as originally planned. Here's the note: 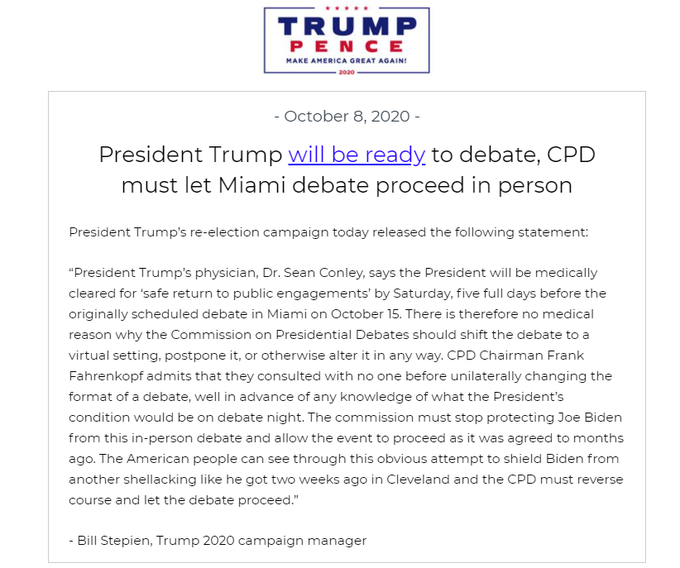 This post has been updated to add a response from Biden's campaign and subsequent reactions by the Trump campaign.