Here's some good news for politicians fretting about how much of America's pharmaceutical drug supply comes from China: Most of it doesn't.

In fact, the majority of active pharmaceutical ingredients (APIs) consumed by Americans were produced right here in the United States, according to a recent report from the health care consulting firm Avalere. When it comes to foreign supply chains, about 19 percent of the active ingredients used in America's drugs come from Ireland. China accounts for just 6 percent.

That's a far cry from what you might have heard from some members of Congress, from the Trump administration, and from businesses looking to cash in on anti-China sentiment. Many of them have cited a widespread and misleading statistic to falsely claim that 80 percent of America's drug supply is imported from China. Leading conservatives such as Sen. Josh Hawley (R–Mo.) have called America's supposed dependence on Chinese-made drugs "inexcusable." And the White House has authorized a $765 million loan to Eastman Kodak as part of a bizarre scheme aimed at "bringing pharmaceutical manufacturing back to the United States," as President Donald Trump put it last month.

Through it all, little actual evidence has suggested that there's a good reason to panic over America's pharmaceutical supply chains. The most acute worry—that China would decide to cut off drug exports to the United States in the middle of the COVID-19 pandemic—has proven unfounded.

More generally, trade data suggest that America's pharmaceutical supply chains are robust and diverse. Of the nearly 2,000 manufacturing facilities around the world that are approved by the Food and Drug Administration (FDA) to provide pharmaceutical drugs to the United States, only 230 are in China. There are 510 in the United States and 1,048 in the rest of the world.

The United States imported more than $115 billion of finished pharmaceutical products in 2018, the most recent year for which the United Nations' COMTRADE database of world trade flows has complete data. Only $1.5 billion of that total came from China.

The Avalere report, which looked at APIs—the building blocks of finished pharmaceutical products—comes to a similar conclusion. China is the third largest provider of APIs to the United States, but "no single foreign country dominates the overall supply of API for the U.S. market." 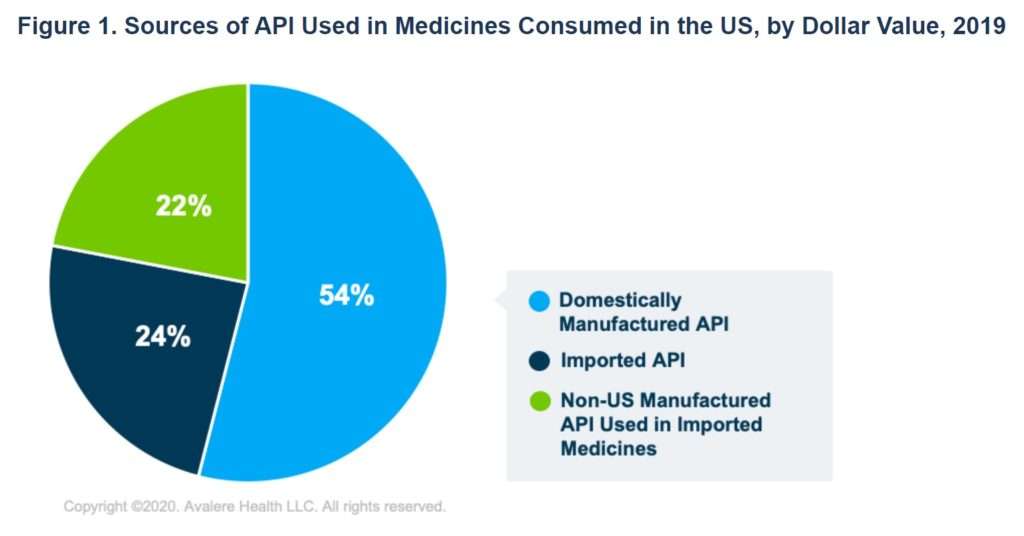 "This report is another piece of evidence suggesting we're not wholly dependent on imports from China for finished pharmaceuticals and APIs," says Clark Packard, a trade policy counsel at the pro-market R Street Institute. "The key is we need more data and evidence before we radically remake this market, but unfortunately policymakers don't seem interested in a rational approach to this issue."

Indeed not. After heavy lobbying by Eastman Kodak, the Trump administration agreed to give the bankrupt camera company a massive loan for the purposes of producing API domestically.

The Kodak deal came just weeks after the White House handed out a $350 million contract to a relatively unknown Virginia-based pharmaceutical company, Phlow Corp., to compete with drugmakers in China. That deal happened despite the fact that Phlow Corp. doesn't have any history of mass-producing pharmaceutical drugs. Indeed, it appears to have been founded this year to cash in on Trump's protectionist politics. A Phlow spokesman told BioPharma Dive, a trade publication, that the company's leaders had been "communicating with government officials about the U.S. pharmaceutical supply for more than a year" and that Phlow's "stated mission" is "reducing the U.S.' dependence on foreign supply chains." And one of the company's board members has been making the rounds in media and congressional committee hearings to talk-up America's supposedly dangerous over-reliance on Chinese drugs.

Before risking hundreds of millions of taxpayer dollars on loans to companies with unproven track records of producing pharmaceutical drugs or their chemical components, you might expect the White House to assess the seriousness of the underlying problem it is hoping to solve. But so far, all the available evidence suggests that China is not responsible for making most—or even much—of America's pharmaceutical drug supply. Lobbyists and politicians are using a manufactured crisis to advance their own interests.