President Donald Trump has been trying to peddle his own version of fake reality, if not fake news, by repeatedly claiming that the recent rise in COVID-19 cases is only due to more testing. The president's most recent attempt to dupe the public with alternative facts occurred during his Fox News interview with Chris Wallace on Sunday. When Wallace displayed a chart showing the steep rise in the number of U.S. COVID-19 cases in the past month, the president dismissed it by asserting, "Chris, that's because we have great testing, because we have the best testing in the world. If we didn't test, you wouldn't be able to show that chart. If we tested half as much, those numbers would be down." 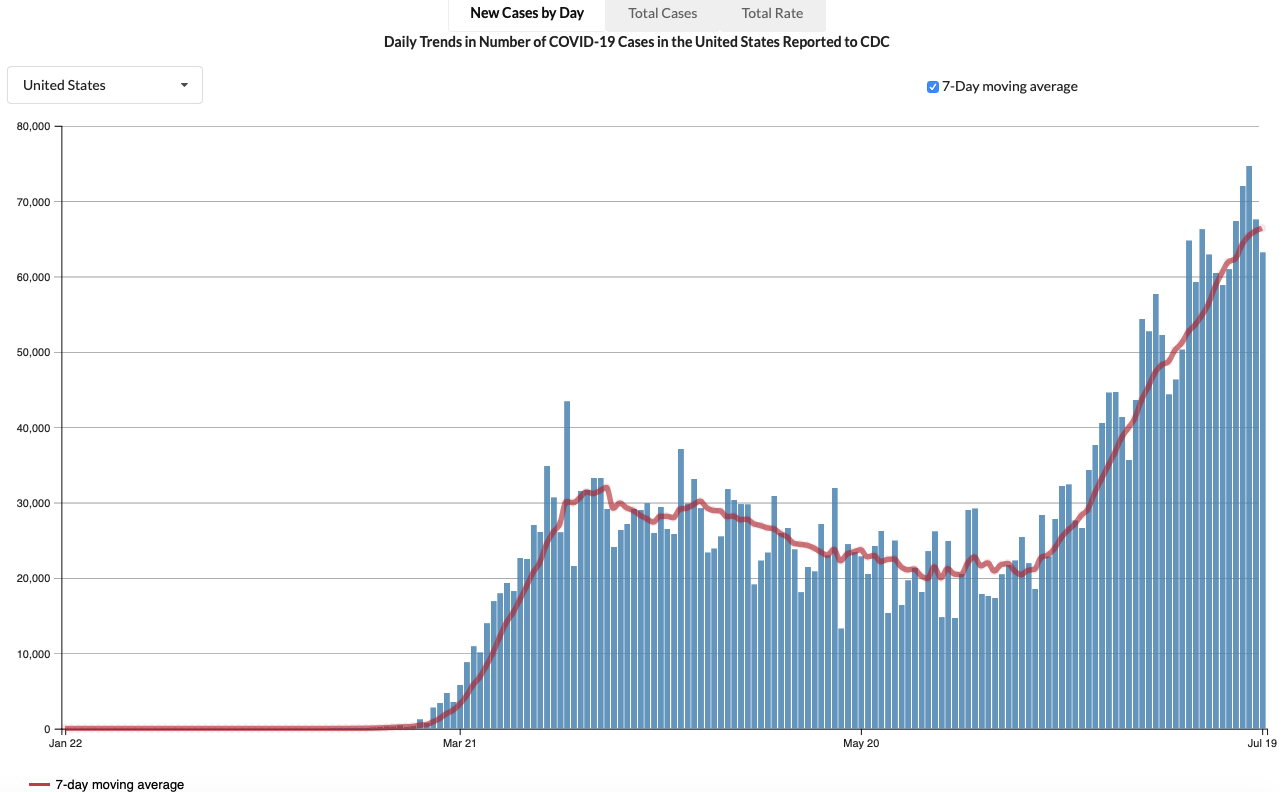 As a general matter, it is true that if you don't look for something, you are less likely to find it. That being said, the president is not wrong when he suggests that expanded testing is finding more mild and asymptomatic cases now than would have been identified earlier in the pandemic when there was a critical shortage of COVID-19 tests. However, the folks over at STAT have crunched the numbers and show that the spread of the virus, far more than testing, explains the soaring increase in the number of cases in a majority of the states.

STAT's analysis looked at the number of people tested and the number who tested positive for the disease (cases) in mid-May, mid-June, and mid-July to calculate the number of cases found per 1,000 tests as a measure of the disease's prevalence.

To illustrate how this works, let's take a look at their calculations for the number of cases per 1,000 tests to track the prevalence of COVID-19 in Florida over the past few months:

But the number of cases per thousand, which is independent of the number of tests, has skyrocketed. On May 13, Florida recorded 479 cases; on July 13, it found 12,624. If the prevalence of Covid-19 were the same in July as in May, Florida would have found only 2,098 cases. In other words, 10,526 of the July 13 cases are not due to increased testing, but, instead, to the increased prevalence of disease.

COVID-19 testing in Florida has essentially doubled since mid-June while the number of cases has grown sevenfold in the past month. "The number of tests only increased by a factor of two," observed Youyang Gu, developer of the well-regarded COVID-19 Projections machine-learning model, to STAT. "Obviously, if you double the testing but the number of cases increased sevenfold, then the virus is clearly spreading."

In just seven states—Colorado, Indiana, Michigan, Missouri, North Carolina, Ohio, and Wisconsin—the number of cases per 1,000 tests declined, indicating that the number of cases was rising in those states mostly due to expanded testing. In addition, STAT reports that expanded testing in 16 states actually identified not only fewer cases per 1,000 tests, but fewer cases overall, indicating that the prevalence of COVID-19 is falling in those states.