On Tuesday, NBC claimed that Google had made the decision to demonetize The Federalist after NBC's own News Verification Unit presented the search engine with evidence the conservative website was spreading misinformation related to recent anti-police brutality protests.

But it turned out that the news outlet spreading misinformation was actually NBC. In a statement, Google denied that it had stripped The Federalist of the ability to generate money from ads. "The Federalist was never demonetized," wrote Google Communications. "We worked with them to address issues on their site related to the comments section."

This directly contradicted the NBC story, which initially suggested that Google had found fault with The Federalist's articles. The actual problem, according to Google, was comments on the articles, not the articles themselves. The Federalist temporarily deleted its comments section, resolving the issue. (Disclaimer: I am friends with Ben Domenech, publisher of The Federalist, and have appeared on his radio show.)

The NBC story—penned by Adele-Momoko Fraser, a producer with the ironically named News Verification Unit—is a perfect example of activist journalism getting the facts wrong and obscuring the truth in order to arrive at an agenda-driven conclusion. Fraser wrote that Google had punished The Federalist "after the company was notified of research conducted by the Center for Countering Digital Hate, a British nonprofit that combats online hate and misinformation." Fraser further noted that "Google blocked The Federalist from its advertising platform after the NBC News Verification Unit brought the project to its attention."

The "project" was little more than a tweet thread by an activist group. The Center for Countering Digital Hate and its project, Stop Funding Fake News, are progressive workshops that engage in public advocacy campaigns to pressure companies to stop advertising on right-wing websites.

THREAD: These brands all support #BlackLivesMatter.

But their ads appear on – and therefore inadvertently fund – racist anti-BLM websites.

We're calling on all these brands to #DefundRacism. Join us. pic.twitter.com/xaFHJjYX1u

Their beef with The Federalist, according to the Stop Funding Fake News website, was that the conservative publication had falsely claimed "CNN/New York Times reports were 'lying' about white supremacist violence." The Federalist article in question was this one by John Daniel Davison, titled "The Media Are Lying To You About Everything, Including the Riots." The tone is hyperbolic—no, the media aren't lying about absolutely everything—and one could disagree with some of Davison's examples, but the article isn't a particularly compelling example of fake news, let alone racist fake news.

That a lefty social media campaign would target The Federalist isn't surprising. The truly bizarre aspect of all this is NBC's involvement. According to Fraser's own characterization of events, it was NBC that informed Google of the social media campaign. That makes it sound like Fraser was working in concert with the Center for Countering Digital Hate. Since the chief complaint against The Federalist was that Davison's article had criticized mainstream media groups, including NBC, it looks like a retaliatory strike.

Fraser subsequently clarified that she "obtained the research exclusively" but did not "collaborate" with Stop Funding Fake News. Her first tweet, now deleted, implies something quite different: 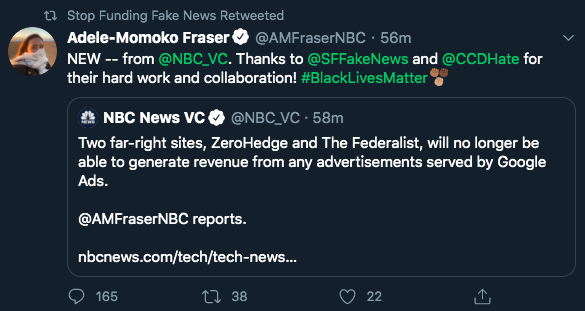 In any case, Fraser had to revise the article several times to add clarifications from Google that her central thesis was wrong. She also removed the section about NBC being the entity that informed Google about The Federalist's alleged failings. Not all of these changes are acknowledged. (Fraser did not respond to a request for comment.)

But the damage was already done: Conservatives exploded with outrage on social media, directing much of their ire at Google. It has become quite popular on the right to believe that Big Tech—Google, Facebook, Twitter, and YouTube in particular—is silencing conservatives and that the government should do something about this. Increasingly, the "something" is to revise Section 230, the federal statute that gives tech platforms some liability protection. Getting rid of Section 230 would probably make social media companies more squeamish about publishing edgy or controversial content, thus undermining free speech protections for everyone—including and perhaps especially conservatives—but the right's anti-tech crusaders frequently overlook this.

Sure enough, Sen. Josh Hawley (R–Mo.), one of the leaders of the conservative effort to regulate Big Tech, took this opportunity to propose legislation that would allow The Federalist to sue Google for unequal treatment.

One can find hypocrisies in every direction. Anyone who wants to argue that an outlet like The Federalist should not be held responsible for its comment section is actually making a philosophical case for Section 230, which extends precisely this protection to large platforms. In general, the internet works best when the government takes a hands-off approach, allowing all sorts of viewpoints to flourish. Still, if Google would like to avoid losing its own protection, the company might think twice about arguing that outlets like The Federalist should be held to a harsher standard.

That said, this does not look like a fight that Google actually wanted. It's not an example of anti-conservative bias: The same thing happened to the website Techdirt last year. The underlying issue was a trivial and routine one, and it was blown completely out of proportion by NBC's sloppy hatchet job. A "news verification unit" not only failed to verify the news but took an active role in spreading disinformation—the very crime of which it had falsely accused others. At a time when newsrooms are deciding how to deal with their employees' increasingly vocal sympathy for progressive causes—often giving in to their demands—the NBC story should serve as a powerful reminder of the perils of swapping journalism for activism.