Huge protests and some rioting rocked Atlanta over the weekend after a white police officer there killed a black man, Rayshard Brooks, in a Wendy's parking lot Friday night.

Brooks, who was 27, died after being shot twice in the back, according to an autopsy report released Sunday. He'd been detained by two police officers after reportedly falling asleep behind the wheel of his car in the parking lot; bodycams and security camera footage show cops administering a sobriety test and subsequently arresting Brooks. It's unclear what happens next, but a struggle breaks out and Brooks appears to grab a stun gun from one of the cops. Brooks breaks away, but is shot from behind as he flees the scene.

Atlanta Mayor Keisha Lance Bottoms criticized the use of deadly force. Fulton County District Attorney Paul Howard told CNN that Brooks "did not seem to present any kind of a threat to anyone, and so the fact that it would escalate to his death just seems unreasonable." The cop who killed Brooks, Garrett Rolfe, was fired, and the other police officer on the scene was placed on administrative leave. The police chief resigned on Saturday.

While city officials in Atlanta seem to be saying and doing the right things after yet another unnecessary death at the hands of the police, Brooks' shooting sparked another round of protests and violence like those that broke out after last month's killing of George Floyd by a police officer in Minneapolis. By Saturday night, the protests had turned to riots in some places. The Wendy's where Brooks was killed was torched and nearby businesses were robbed.

The Wendys where Atlanta Police shot and killed #RayshardBrooks has been lit on fire by protesters: pic.twitter.com/8i5uiAjPHp

Destruction of the BP next to the #AtlantaWendys. The original target was the liquor store but since that was black owned, they aimed their anger at BP. #AtlantaRiots #Atlanta #Destruction #Thepeople pic.twitter.com/Y7YFCQpS4j

Looting is not going to solve the problem of police officers killing unarmed people, and it only creates more victims. (Several of the businesses destroyed were black-owned, according to local news reports.) But the palpable anger unleashed in recent weeks seems unlikely to abate until public officials respond to it with substantial reforms to policing. May I suggest we begin by repealing qualified immunity?

Gonzo-ish left-wing writer and Rolling Stone contributing editor Matt Taibbi enters the debate over the progressive-led purges at major media outlets—like the one that ousted New York Times opinion editor James Bennet after he approved that that cringeworthy but certainly not firable op-ed by Sen. Tom Cotton (R–Ark.) a few weeks back—and concludes that it's a symptom of an intellectual revolution gone wrong:

It feels liberating to say after years of tiptoeing around the fact, but the American left has lost its mind. It's become a cowardly mob of upper-class social media addicts, Twitter Robespierres who move from discipline to discipline torching reputations and jobs with breathtaking casualness.

The leaders of this new movement are replacing traditional liberal beliefs about tolerance, free inquiry, and even racial harmony with ideas so toxic and unattractive that they eschew debate, moving straight to shaming, threats, and intimidation. They are counting on the guilt-ridden, self-flagellating nature of traditional American progressives, who will not stand up for themselves, and will walk to the Razor voluntarily.

Taibbi's scorching essay is well worth the time to read. So, too, is Robby Soave's Reason take on the upheaval at the Times and the ongoing spate of readers demanding the heads—or at least the jobs—of anyone who deviates from the prescribed progressive responses to the civic unrest that has rattled American cities in recent weeks. 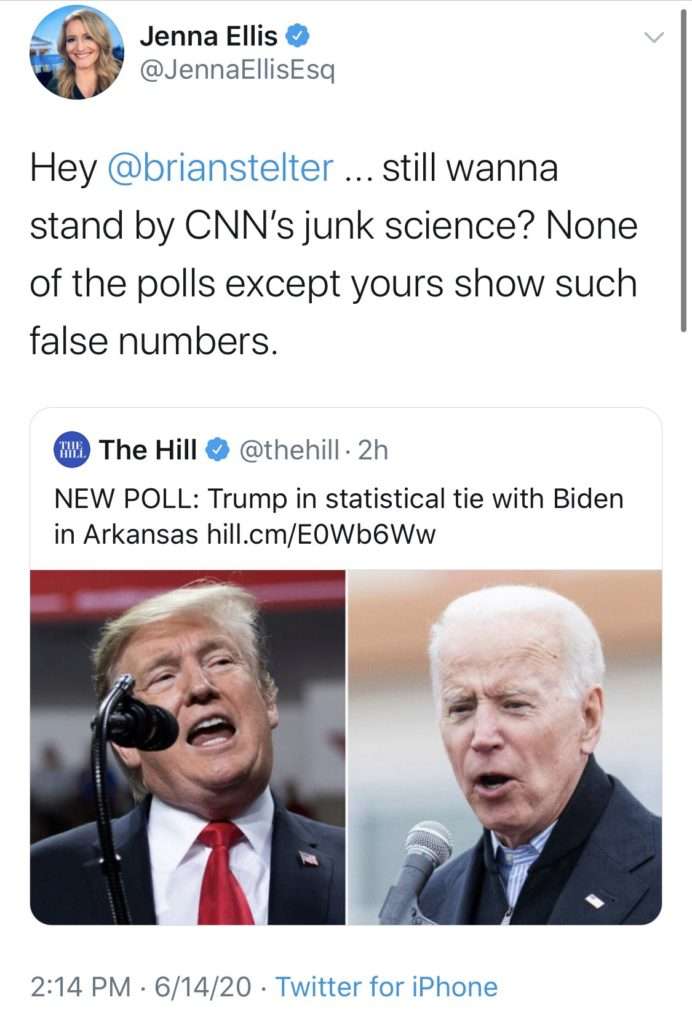 Suffice it to say that if Trump struggles to beat Biden in Arkansas—a state Trump carried by 27 points four years ago—he's probably not heading for a second term in the White House. The actual good news for the Trump campaign is that the Arkansas poll looks like an outlier:

The Hendrix College poll of Arkansas--the one cited by a Trump lawyer to dispute the last CNN/SSRS poll--is the single worst poll of the cycle for the president
(it is the one on the veryyy bottom-right corner) pic.twitter.com/Oe9LOMU8be

Meanwhile, Biden has a plan for reopening the economy. He would create a federal paid-leave program for workers who get sick, would hire at least 100,000 people to duplicate contact-tracing work already being done by states, and would empower the Occupational Safety and Health Administration to enforce social distancing.

• Remember when social distancing was a thing?

The area outside of the Brooklyn Museum is packed for the #BlackTransLivesMatter protest. pic.twitter.com/UbZYzs15h1

• New York Gov. Andrew Cuomo threatens to turn this car around unless you kids start behaving. Other places, too, might halt or reverse coronavirus reopenings as cases continue to surge.

• More than 1,400 professional athletes and coaches have signed a letter calling for qualified immunity to be abolished.

• Radley Balko on one reason talking about black-on-black crime isn't a good retort to the racial disparity in police shootings:

The "blacks commit 50% of homicides" thing just isn't a persuasive rejoinder to the racial disparity in police shootings.

Here's why: The overwhelming majority of time when cops kill, it is not to stop someone from killing someone else. Most of the time, it's in response to…

• Trump says he won't watch U.S. soccer games or the NFL unless players are forced to stand for the national anthem—which hopefully means he'll stop tweeting about this tired subject too.

An officer abruptly stops so the protestor walking behind him bumps into the cop.

Then the man is violently arrested.

Bystanders: "they kneeled on his neck & had about 6 officers holding him down."pic.twitter.com/uNK5DOaFRo

Biden's Baby Formula Airlift Stunt Should Never Have Been Necessary