Thirty-one years ago today, the Chinese government executed an unknown number of peaceful student protesters at and near Tiananmen Square—official estimates of the body count range from a few hundred to several thousand. The day after, as tanks attempted to leave, a single unidentified man wearing a white shirt, holding shopping bags, stood in front of the tanks in a now-iconic show of peaceful civil disobedience. As the tanks attempted to pass around him, he kept repositioning himself, undeterred.

Many have theorized about who he is and where he disappeared to post-standoff. Some claim he was executed by Chinese government forces shortly thereafter, others say he lives in obscurity somewhere in the mainland, and still others believe he is an archaeologist at a museum in Taiwan. But Tank Man's choice to boldly counter violence with the risk of self-sacrifice has been embedded in public memory ever since, a symbol of resistance to an authoritarian government that used repugnant force to pacify peaceful protesters. The image is perhaps made even more iconic by the Chinese government's patently absurd addendum that they showed great restraint by choosing not to mow Tank Man down.

Never forget the #TiananmenSquareMassacre of 31 years ago. It was a day on which the Chinese military was send in to "restore order" following massive pro-democracy protests.

Bodies and bikes lay crushed in the streets around the square, run over by armoured vehicles pic.twitter.com/08UmXune40

Over the past week, many images have emerged from the demonstrations following the death of George Floyd, an unarmed man who died after a Minneapolis police officer held his knee on Floyd's neck for nearly nine minutes. In some of those protests, concerned citizens peacefully exercise their First Amendment rights and the cops unobtrusively let them. In others, the protests remain peaceful but the police release tear gas and conduct "shows of force" with military helicopters, sending debris flying into the faces of those who have gathered. In still others, militants have set fire to cop cars and buildings and looters have plundered stores.

Tank Man taught us that the most lasting anti-authoritarian images do not revolve around rebels wielding brute force. They involve everyday people taking on extraordinary personal risk; their calm bravery makes shows of state power look even more unwarranted, extreme, and horrifying.

Last week in Austin, for example, a black man in a blue shirt received pepper spray to the face from a line of heavily-armored cops:

In Long Beach, California, protesters held their hands up, showing they were unarmed, opposite a line of cops:

In Washington, D.C., men stared down lines of officers: 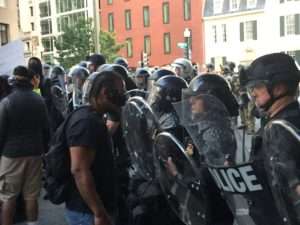 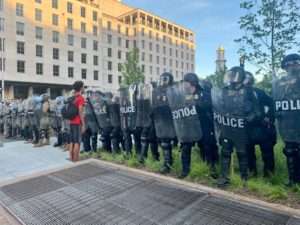 We are not afraid! Despite a fascist curfew and military police violence, over 10K people came out to protest in DC #BlackLivesMatter pic.twitter.com/m2XGvV08wm

In Fort Lauderdale, a cop told off her colleague after he used unwarranted force against a protester:

In images like these, the forces of state power don't look as strong as they think. Their weapons and helmets and goggles and shields make their opponents look brave and startlingly normal; these are average men and women clothed in t-shirts and shorts, not riot gear, willing to risk their safety to ensure that Americans are not executed for minor or nonexistent crimes.

These brave displays aren't as iconic in Tank Man—not yet, anyway. And even at its most repressive, the American police apparatus is nowhere near as bad as the totalitarian regime that cracked down in Tiananmen Square. But 31 years ago or today, these images of regular people standing up to state force are powerful. And 31 years ago or today, images of the uniformed hordes arrayed against them only embolden those who seek justice.