After losing $78 billion since 2007 amid a decline in mail volume coupled with soaring pension costs, the United States Postal Service's (USPS) business model is "not financially sustainable," a government audit has concluded.

In a scathing report set to be released later today, the Government Accountability Office (GAO) calls on Congress to reevaluate all aspects of the Postal Service's operations, from how often Americans receive their mail to whether the USPS should be restructured to receive annual infusions of taxpayer dollars. "Absent congressional action on critical foundational elements of the USPS business model, USPS' mission and financial solvency are increasingly in peril," the audit concludes.

The report comes at a crucial moment. In March, Congress extended a $10 billion line of credit to the USPS as part of the Coronavirus Aid, Relief, and Economic Security Act (CARES Act) after rejecting an earlier draft of the stimulus bill that would have sunk $25 billion in cash into the beleaguered agency. House Democrats are now seeking a $25 billion Postal Service bailout in the so-called "phase four" stimulus bill lawmakers are currently negotiating.

Due to the sharp drop in mail volume during the COVID-19 pandemic, the USPS expects to lose as much as $13 billion this year, Postmaster General Megan Brennan told the House Oversight and Reform Committee last month.

President Donald Trump has been unwilling to bail out the USPS without reforms. Asked about it at a press conference last month, Trump said the agency should "raise the prices by actually a lot, then you'd find out that the Post Office could make money or break even."

The new GAO report makes clear that neither one-time bailouts nor higher prices for mail will be sufficient.

In the 10 years since the GAO first classified the USPS as "high-risk"—a designation that means an agency or department is vulnerable to waste, mismanagement, and needs reform—the service's fiscal status has "worsened due to declining mail volume, increased employee compensation and benefit costs, and increased unfunded liabilities and debt," the GAO's new report states.

Perhaps the best indicator of the Postal Service's structural problems is the divergence between the number of employees it has and the amount of mail it delivers. Since 2006, First Class mail has declined by 44 percent, the GAO found, but the number of postal workers has grown during the same period of time.

Also of concern is the growth of debt in funds that are supposed to pay for pensions and other benefits for retired workers. At the end of 2019, the pension fund had $50 billion in unfunded liabilities—that's the long-term gap between what the fund expects to pay out to current and future beneficiaries and the amount of revenue the fund is expected to collect from workers' paychecks and investment earnings. The fund that covers health care expenses for retired postal workers is facing a $69 billion unfunded liability. 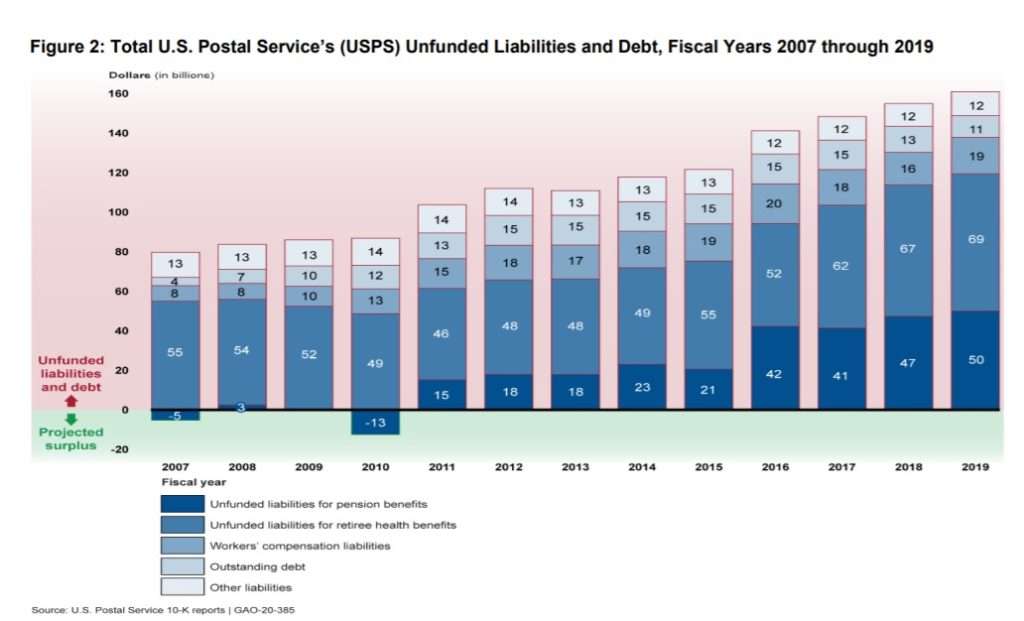 None of these problems should surprise lawmakers. After the USPS reported a $4 billion loss in 2018, Brennan warned that the agency "cannot generate revenue or cut enough costs to pay our bills." Raising prices has not staunched the flow of red ink. The cost of a stamp jumped 10 percent on January 1, 2019, and other mailing services increased by 2.5 percent on average—but expenses have been outpacing revenues by a wide margin.

"If Congress is going to be asked to get the Postal Service out of yet another fiscal jam, we owe it to the American people to make sure we aren't just setting them up for yet another bailout the next time there's an emergency," Rep. Jim Jordan (R–Ohio), the highest-ranking Republican on the House Oversight Committee, said in a statement about the new GAO report. "The USPS needs to be a self-sufficient, competitive enterprise, and a legislative overhaul for the long-term is the only way to make it one."

In 2018, the Trump administration outlined two plans for privatizing the USPS in whole or in part, either by handing over management of the service to a private operator under federal oversight or by selling off the postal service in its entirety.

Privatization of the USPS—something Reason has been advocating for literally over 50 years—would give the agency the ability to free itself from its current mess, which is largely the result of overlapping and sometimes unnecessary congressional mandates.

"The USPS is in a straitjacket unable to save itself during the crisis because Congress imposes restrictions on costs, pricing, labor unions, delivery, and other operational factors," writes Chris Edwards, director of tax policy studies at the Cato Institute, a libertarian think tank. "Congress should allow the USPS to implement long‐​needed reforms such as reducing delivery days, closing locations that have few customers, repealing collective bargaining, and other cost‐​saving changes."

The level of debt within the USPS makes privatization a challenge, but not an insurmountable one. It would probably require significant restructuring and service changes for the privatized service to net a profit, and the federal government would likely need to absorb the current debts. And it could net a windfall for the government to help meet its pension obligations to postal workers. Cornell economist Richard Geddes estimates that a postal IPO could raise $40 billion.

It would have been far better for Congress to have considered a comprehensive overhaul of the USPS prior to the current crisis. But waiting any longer is only going to make the mess harder to clean up.

"Comprehensive postal reform has not taken place in part because of the difficulty in obtaining compromise among various stakeholders with divergent views," the GAO report states. "Continued inaction will result in deepening financial problems—putting the USPS' mission to provide universal postal service at greater risk and minimizing the ability to make the most appropriate or sustainable policy decisions."