Laboratory experiments show that heat, humidity, and exposure to sunlight significantly speed up the rates at which the novel coronavirus is destroyed, according to data revealed yesterday at the White House by William N. Bryan, the acting undersecretary for science and technology at the Homeland Security Department. The experiments, conducted at the U.S. Army's biosecurity laboratory at Fort Detrick, Maryland, tested how long the virus would persist on hard, nonporous surfaces and as droplets in the air when exposed to various levels of heat, humidity, and sunlight.

The viral half-life measurements—that is, the amount of time it takes for half of a given quantity of virus to degrade and disappear—ranged from 18 hours on hard surfaces to 2 minutes depending on the temperature, humidity, and exposure to sunlight. The half-life of the virus in droplets ranged from about 60 minutes to 1.5 minutes. Basically, the hotter, the steamier, and the sunnier, the more quickly the virus was destroyed. 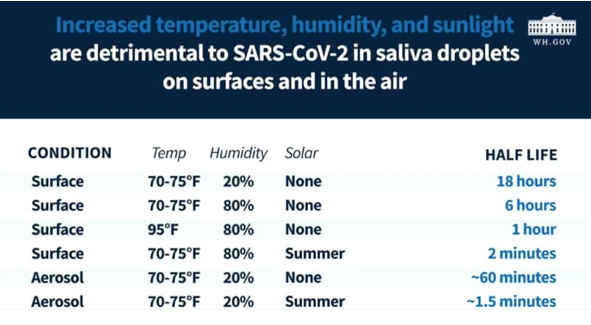 This laboratory research accords with the findings of some epidemiological analyses that suggest that higher heat and humidity slow down the spread of the virus. In addition, other research finds a strongly seasonal variation in the infection rates of the common coronaviruses that are responsible for some bad colds. For example, a 2010 study in The Journal of Clinical Microbiology reported: "Generally, coronaviruses displayed marked winter seasonality between the months of December and April and were not detected in summer months."

During his presentation, Bryan did say, "It would be irresponsible for us to say summer will kill the virus." But he did suggest that summer conditions are "another tool in the toolbox" to use against the virus.

Here's hoping that the virus that causes COVID-19 will act like its common-cold causing cousins and fade away for the summer. Such a dog days respite would also provide our health system time to prepare for a possible second wave of infections in the coming fall and winter.

What the Methodist Split Tells Us About American Political Polarization