The federal government's books are in such bad shape that auditors can't even do their jobs, and the national debt is growing at an "unsustainable" rate, the Government Accountability Office (GAO) warned in its annual comprehensive review of the government's financial statements.

The GAO singled out the Pentagon—as it has every year since 1990, when federal auditors first started trying to peer into the black hole of military spending—for "serious financial management problems." That includes more than 1,300 new issues raised during this year's incomplete audit of the Defense Department. Despite those persistent financial problems, the Pentagon has seen a huge boost in spending under the Trump administration.

Of the 24 federal departments and agencies subject to annual audits under a 1990 law, only the Pentagon and the Department of Housing and Urban Development failed to get a clean review this year. Note that a clean review does not mean there was no wasteful spending—merely that auditors at least were able to see where the spending was going.

"Resolving the problems outlined in our audit report is of utmost importance given the federal government's reported fiscal path," wrote Gene L. Dodaro, U.S. comptroller general and the head of the GAO, in a letter to Congress and President Donald Trump. "Absent policy changes, the federal government continues to face an unsustainable long-term fiscal path."

Measured as a share of the entire U.S. economy, the national debt has doubled in just 12 years and is on pace to grow to historical highs within the next decade. The federal government's budget deficit—the gap between how much revenue it raises and how much money it spends—is expected to exceed $1 trillion this year. 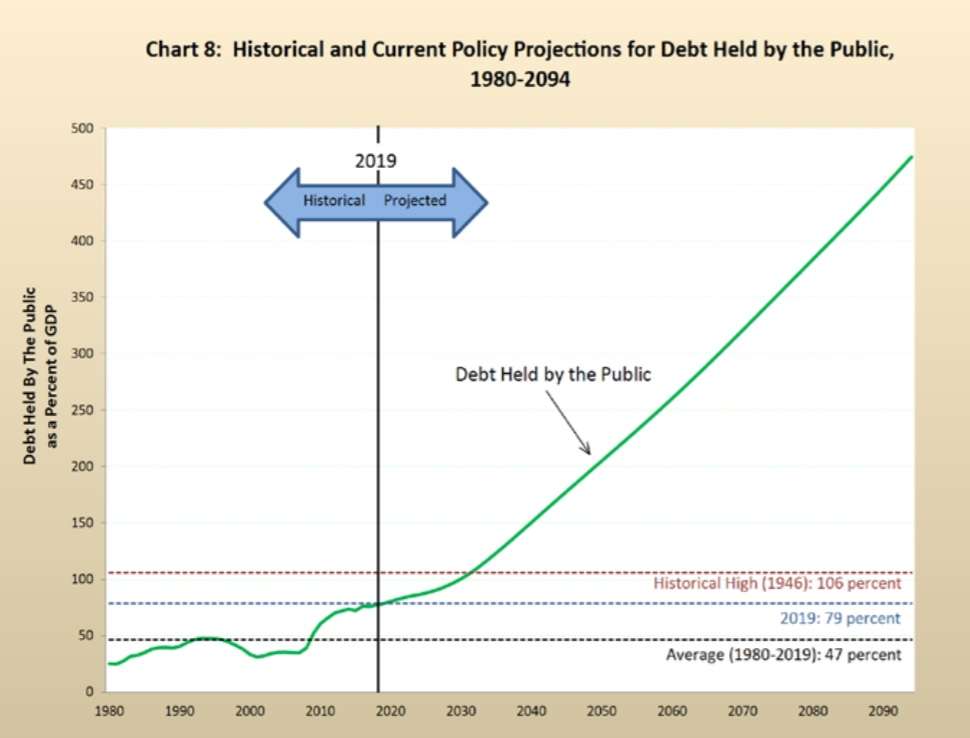 "While the estimated magnitude of the fiscal gap is subject to a substantial amount of uncertainty, it is nevertheless nearly certain that current fiscal policies cannot be sustained indefinitely," the GAO's report concluded. The sooner the growth of the deficit and debt can be slowed or reversed, the less those policies are likely to affect economic growth.

But is anyone listening? Lawmakers from both major parties have worked together in recent years to pass budgets that exploded annual deficits and added to the debt. Democrats running for president are promising to hike federal spending by trillions of dollars to pay for free college, government-run health care, and the fight against climate change—and even though they are also promising to raise taxes, the math doesn't add up. That means deficits will continue to grow. Meanwhile, President Donald Trump has abandoned any pretense of fiscal conservatism, and most of his party has followed suit.

But the report is right there for them to see. When the past decade's fiscal recklessness hits the fan, they won't be able to claim that no one saw this coming.

Scott Shackford | From the May 2021 issue

Mom, How Come the Kids in These Old Books Are Allowed Outside Without a Parent or Cell Phone?