When President Donald Trump's budget proposal landed yesterday, Democrats were quick to denounce it as savage and inhumane.

The budget, which Trump officials say would balance in 2035, would "inflict devastating cuts to critical lifelines that millions of Americans rely on," according to Speaker of the House Nancy Pelosi (D–Calif.). Sen. Bernie Sanders (I–Vt.), a leading contender for the Democratic presidential nomination, called it "immoral," "shameful," and "profoundly unethical." Sen. Elizabeth Warren (D–Mass.), another presidential hopeful, tweeted out a bunch of numbers purporting to show the dramatic cuts to entitlement programs Trump's plan calls for.

Trump wants to take money out of your pockets so there's more for his rich buddies. We are building a grassroots movement to stop him. https://t.co/fyjf8nIz2e

There are at least a few problems with these responses, among them that Warren's Medicare numbers are wrong.

As the Committee for a Responsible Federal Budget notes, the budget calls for about $600 billion in Medicare cuts, not $750 billion. That's because some of the funds are not actually cut but reclassified, taken from one part of the Medicare budget and spent elsewhere. In addition, the cuts that Trump proposes aren't exactly radical overhauls: Similar proposals appeared in President Barack Obama's budgets, and in the proposals of Democratic presidential candidates. They would affect payments to providers, but would not directly reduce benefits, and could even lead to reduced costs for seniors in the program.

But there is an even deeper problem with these attacks: None of these cuts are ever going to happen.

The president's annual budget proposal has about as much impact on the budget process as the lunch menu in the Rayburn House Office Building cafeteria, possibly less, given that one actually impacts the disposition of sitting members of Congress. No serious person, which admittedly excludes some presidential candidates, thinks otherwise, which is why virtually every news story about the budget has some version of a to-be-sure-this-does-not-matter caveat buried somewhere in the warnings about budget cuts and secret limited government radicalism. ("The White House budget is largely a messaging document," reports The New York Times. "The proposal is unlikely to become law," notes The Wall Street Journal. "What ultimately gets passed may show little resemblance to what the President has proposed," explains CNN.) GOP lawmakers are treating it with the sort of respect they usually reserve for protesters wearing sandwich boards: "In the end," Sen. Mike Enzi (R–Wyo.) told The Wall Street Journal, "they are just a list of suggestions."

Acknowledgments that the president's budget plan won't pass are usually paired with an insistence that the budget is a "statement of priorities," or, per Pelosi, "a statement of values." The underlying argument is that even if the White House budget won't ever be passed into law, it's a guide to what the president would like to do, and it's reasonable to criticize him for it.

This has certainly been true of administrations past, and it is fair up to a point. A presidential budget plan certainly tells us something about the president and how he believes the government should spend its—rather, your—money.

But in the case of Trump I would argue that it is at least partially, and perhaps mostly, something else: a guide to how the president and his advisers want people to think he'd spend money.

Hence the Medicare "cuts" which don't directly touch benefits; the elimination of Obamacare and the savings it would offer with promises to replace it but only vague hints as to what that might be; and, most of all, the assumption of super-charged economic growth over the next decade, well beyond what the Trump administration has accomplished so far, and well beyond what rival forecasters project.

It then returns to forecasting 3.1% growth (q4/q4) this year.https://t.co/PYbBPNWZLM

That projected boom doesn't just make the budget's hypothetical future economy look good. It makes the relatively modest cuts Trump calls for much easier to swallow by boosting tax revenues to the tune of about $4 trillion over the next decade, making the budget picture look far rosier than is remotely realistic.

The White House budget assumes GDP will be *$21 trillion higher* over the next 10 years than CBO did, bc WH assumes very fast economic growth.

Trump's budget isn't a plan or a rough guide for Congress. It's a fantasy of economic boom times in which a soaring economy makes real fiscal challenges go away. It's an exercise in wishful thinking.

That doesn't mean Trump's budget doesn't have some good ideas (fantasies sometimes do) or that it isn't worth arguing about (any major presidential document is worthy of serious and substantive analysis). But it does mean it's better understood as a sort of campaign flyer, a politician's gauzy vision of unlikely economic prosperity, than as a meaningful to-do list for lawmakers.

As for Trump's true priorities, it's worth examining his record as it actually exists, in the form of the budgets that have passed and spending that has occurred under his watch. As Chris Edwards, a budget scholar at the Cato Institute, notes, with the help of both Republican and Democratic leadership in Congress, Trump's promises of spending cuts and debt reduction have been largely hollow, and that wouldn't change even if Trump's budget plan were somehow to pass in full.

Notably, the trajectory of federal spending under Trump has been upwards in both domestic and military spending—in contrast to Obama, who spent a little less on both during the same time. 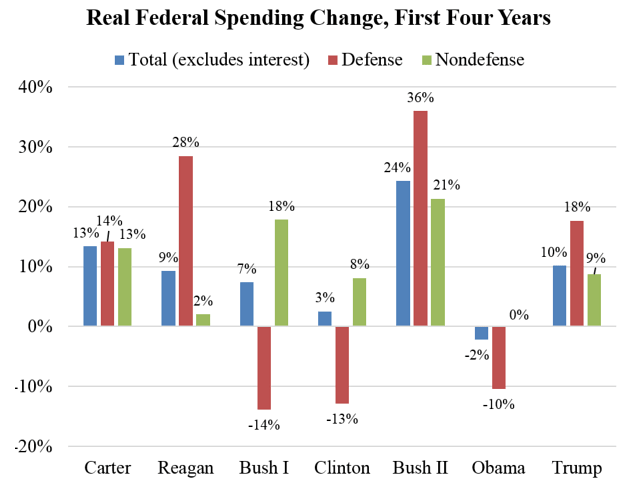 As Edwards writes, "Trump has been a big spender across the board."

Over the coming year, you can expect more of the same. As The Wall Street Journal reports, lawmakers will likely "punt final decisions on 2021 spending until after the November presidential election, and instead fund the government with temporary spending measures for the first few months of the fiscal year." This sort of crude congressional dealmaking has been the reality under Trump, and it is this—not the president's fantasy budgets—that is all but certain to continue.