Carbon dioxide emissions from the energy sectors for both the world and the United States have flattened and may have peaked. In its latest global emissions report, the International Energy Agency (IEA) reports that "global energy-related CO2 emissions flattened in 2019 at around 33 gigatonnes (Gt), following two years of increases." This flattening is chiefly the result of a steep reduction in carbon dioxide emissions from rich countries in which renewables and natural gas are outcompeting coal for electric power generation. In addition, IEA noted that "higher nuclear power generation in advanced economies, particularly in Japan and Korea, avoided over 50 Mt of CO2." In other words, by ramping up their use of nuclear power, Japan and Korea burned less fossil fuels and thus emitted far less carbon dioxide.

Overall, energy-related carbon dioxide emissions in the U.S. in 2019 fell by 140 megatons, or 2.9 percent, to 4.8 gigatons. The IEA attributes much of the decline to a 15 percent reduction in the use of coal for power generation. Milder summer and winter weather in 2019 also contributed to lower electricity demand.

European Union carbon dioxide emissions fell by 160 megatons, or 5 percent, to reach 2.9 gigatons. A 25 percent drop in coal-fired generation accounted for much of the reduction in emissions.

On the other hand, the increase of nearly 400 megatons of carbon dioxide emissions from developing countries in 2019 largely offset the emissions declines achieved in rich countries. Thus the flattening global trend. 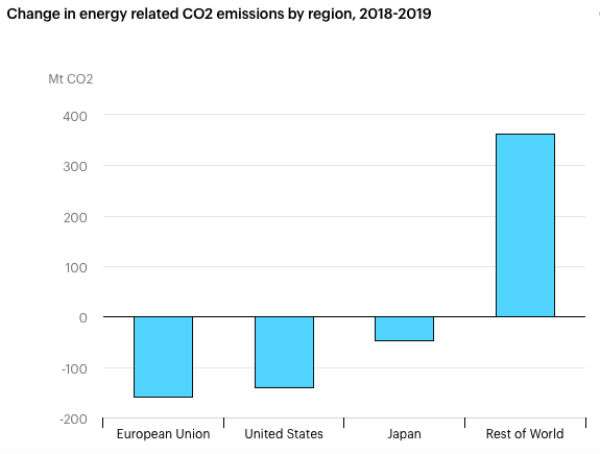 With respect to future U.S. emissions, the Energy Information Administration (EIA) earlier this week projected that U.S. energy-related carbon dioxide emissions will decrease through the early 2030s before rising to 4.9 billion metric tons in 2050. The EIA scenario assumes no new laws or regulations. The decline over the next decade or so would result from continuing coal-fired generation retirements and increasing installation of renewable energy generation.

Overall carbon dioxide emissions from the U.S. energy sector peaked at 5.9 gigatons in 2007 and have now dropped 19 percent to 4.8 gigatons in 2019. 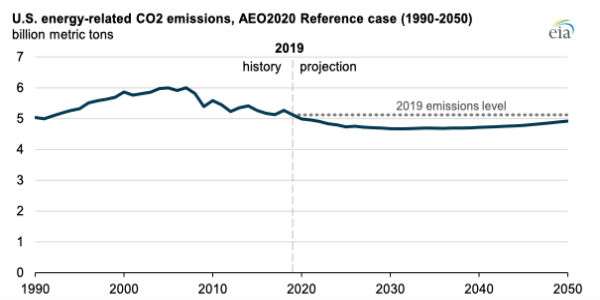 The latest data from the IEA and EIA bolster University of Colorado climate policy researcher Roger Pielke Jr.'s conclusion that global carbon dioxide emissions are on the brink of a long plateau. This is relatively good news for the world's climate since more dire scenarios that projected much higher future levels of globe-warming carbon dioxide emissions are increasingly unlikely.

If this doubly punitive anti-press maneuver sounds familiar, that's because it keeps happening, including to Reason.

Paul Krugman's 10-Year History of Being Wrong About Bitcoin

Why is it so hard for him to just admit he was wrong?