The results of the Iowa Democratic caucuses have been delayed. Very delayed. Possibly due to problems with an app, possibly due to new rules, and possibly because of inconsistencies in the results.

A precinct chairman called into CNN to say that he was unable to report the results from his caucus and had been on hold for an hour. While he was explaining the delay to CNN host Wolf Blitzer, the man finally reached an operator, who then hung up on him while he told Blitzer that he needed to report the results:

Here is the man's heroic tale in his own tweets:

I am the caucus secretary for Story County Precinct 1-1. I've been on hold for over an hour to report the results. We have 6 delegates

Here's how it happened 1/

A computer app may be behind the problem:

There is technical issue with Iowa results reporting. Hearing from multiple campaigns that the Iowa Democratic Party is sending a tech staffer to the shared boiler room in Des Moines, where the campaigns have staff headquartered, to brief them momentarily on what's going on.

Bloomberg News reported earlier in the evening that the app, designed to make it easier for caucus secretaries to report results, does not, uh, allow them to do that. Could be user error, could be a broken app; neither scenario is without precedent. But the app really seems like a big problem. Maybe the problem:

A source in the IDP room where the results are being processed said they were being taken and entered manually on the phone, and said the apps were "barely" working. https://t.co/GxtYZNncsp

The Iowa Democratic Party has released two statements thus far. The first was shrouded in mystery and intrigue:

In its second statement, the Iowa Democratic Party reported "inconsistencies in the reporting of three sets of results." Also, don't blame the app! 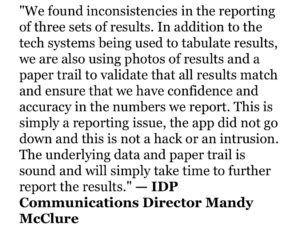 "If Iowa hopes to maintain its privileged status, it's crucial that everything go smoothly tonight," The Atlantic's Elaine Godfrey wrote before caucus sites opened today. "During the 2016 caucus, volunteers were unprepared for the overwhelming turnout; there were technological problems, reporting errors, and multiple coin flips."

Did somebody say coin flips?!