Immigration and Customs Enforcement (ICE) announced two weeks ago that the arrest tally for the foreign students caught by its sting operation against pay-to-stay visa mills—fake universities that handle transcripts and paperwork so that foreign students can maintain their visa status without attending school—has risen to 250.

But sources connected to the students tell Reason the operation, which involved ICE setting up its own fake university, lured in some students who had done nothing wrong. Some of those students were even tricked into quitting legitimate schools in favor of the feds' fake visa mill. Meanwhile, the operation's real target, the visa mills, remain unaffected.

The latest chapter in the story begins when ICE decided to crack down on visa mills in 2015. What exactly triggered this effort is unclear. That year, ICE created the University of Northern New Jersey, a fake college that held no classes and offered no instruction. If students paid recruiters between $3,000 and $12,000, they could enroll and show that they were taking the required course load to satisfy the requirements of their F-1 student visas and, more importantly, obtain CPT (Curricular Practical Training) status.

Usually, F-1 students are limited to 20 hours of employment on-campus. But CPT status allows those who have completed one year of academic work to take jobs off campus if the work is integral to their area of study. For instance, nursing students who need practical training to complete the requirements for their diplomas can work in a hospital and get paid for it, or computer science majors can do real-life programming at a company. It's like a paid internship for foreign students.

The New York Times reported at the time that some students genuinely didn't know what they were getting into. The university repeatedly canceled scheduled classes last minute via Twitter for all kinds of reasons including bad weather. When one frustrated Chinese student drove up to the university to find out what was going on, an ICE agent impersonating the university president met him and reassured him that everything was fine, even handing him a fake T-shirt with the university logo and an American flag.

But many students enrolled out of desperation. They had obtained jobs but didn't win an H-1B visa in the annual lottery, given that there are twice as many applicants as visas handed every year. So the CPT became a stopgap way of obtaining work status until they could try again for an H-1B the following year.

The sensible policy response to the shortage would be to raise or scrap the annual H-1B cap—set before the internet revolution—so that foreign students with a job offers could be assured work authorization. This would instantly throw all the visa mills out of business. Instead, ICE launched elaborate operations to play detective.

The New Jersey sting resulted in over 1,000 students losing their visa status and being thrown out of the country. But according to Rahul Reddy, a Texas-based attorney and founding partner of a 23-year-old firm that specializes in employment-based immigration law, those students were actually just collateral damage. The primary targets were professional recruiters acting as middlemen between students and fraudulent universities.

But the latest sting is different. This one went to elaborate lengths to target students themselves, insists Reddy, who has been offering legal services to many of them.

This time, ICE created the University of Farmington, which was physically located on Northwestern Highway in Southeast Michigan—a major commercial thoroughfare with doctor's offices, real estate companies, restaurants, and more. Its website billed the now-disbanded university as a STEM school offering various graduate degrees. It pretended that the university was founded in the 1950s to offer returning soldiers from World War II a "quality and marketable education" to help turn Detroit into a "center of innovation" for manufacturing, the website also claimed to maintain a 10:1 student-teacher ratio. It even invented a fake seal with the motto "Scientia et Labor," meaning "Knowledge and Work." 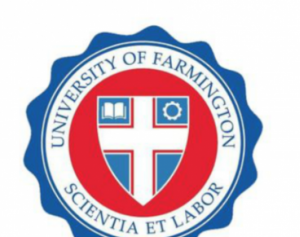 Notably, it also claimed that the school was SEVP approved. SEVP refers to the Department of Homeland Security's (DHS) Students and Exchange Visitor Program, which lists all the certified schools that immigration authorities recognize. Separately, ICE enlisted an accreditation agency to list the school as legitimate on its website, according to Detroit Free Press' Niraj Warikoo, who also found that the university was incorporated by Michigan's Department of Licensing and Regulatory Affairs in January 2016. 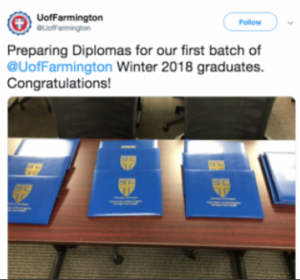 All this meant that any foreign student who looked at the university website would have no reason to suspect that it was an illicit visa mill. But to dispel any remaining suspicion, ICE coordinated with DHS to ensure that the enrolled students would show up on DHS's Student and Exchange Visitor Information System (SEVIS).

SEVIS is akin to an E-verify program for universities, a federal database that lists all foreign students in good standing with immigration authorities. Students not enrolled in a federally recognized university aren't listed on SEVIS. For foreign students looking for American education, this is the ultimate seal of official approval.

With this architecture in place, ICE agents impersonating university officials started recruiting students by offering them cheaper courses and quicker processing of CPT, says Jay Talluri, president of the Telugu Association of North America, the oldest and biggest Indo-American organization in North America that caters to the special issues of the people in their community. They also offered a hefty commission to students, mostly from India, who recruited their friends. In all, it managed to enroll 600 students.

Accepting the commission was clearly illegal because the terms of the F-1 visa bar foreign students from working off-campus for pay, especially in areas unrelated to their studies. So ICE dubbed the students who took the kickback as "recruiters" and went after them the same way it targeted professional recruiters in 2015. It charged eight of them with a "conspiracy to commit visa fraud and harbor aliens and profit from them." Seven of them have already started prison sentences of a year or more pending deportation.

The rest have all likely fled the country to avoid arrest. Reddy says he started getting calls from panicked students when the raids started, and that's what he advised them to do. That's why ICE's arrest count is not even bigger.

About 80 percent of the 250 that ICE snagged were granted "voluntary" departure and banned from the country for many years. Another 10 percent are being deported and the rest are contesting their removal orders.

ICE claimed in its indictment that "each of the foreign citizens who 'enrolled' and made 'tuition' payments to the University" knew that the program was "not approved by the DHS" and was "illegal."

This is simply not true. The university was listed as accredited on state and federal sites. Moreover, students also had no reason to believe that the university was fake given that the DHS handed them SEVIS authorization, which would not have been possible if it weren't an approved school.

Indeed, Warikoo notes that some of the students jumped to the University of Farmington from universities that lost their accreditation. They likely thought that switching would allow them to fulfill their visa requirements (none of the students are talking to the press). Others actually tried to transfer out of the University of Farmington when they realized that the university was not holding classes and they were making no progress toward their diplomas. But ICE has not spared them either.

But the even more troubling aspect mentioned by Reddy and Talluri, both of whom know many of the students caught in the dragnet, is that ICE actually lured some of the students from legitimate universities by offering them cheaper courses. "Some of the students were going to good public and private schools when ICE tempted them with lower prices at University of Farmington," says Talluri. He and his organization have raised concerns about ICE's tactics with senators, and India has launched a formal diplomatic protest. Neither Talluri nor Reddy were willing to provide names of students who had been lured from legitimate universities, suggesting that such students are afraid of attracting law enforcement attention.

Foreign students are particularly vulnerable to pitches for cheaper classes because their options to work and pay for their education are severely restricted by visa rules. Hence, many rely on families back home for support and are always on the lookout for reducing the burden on their loved ones. ICE collected millions of dollars in fees from them, Warikoo reported, but it won't say if it has any intention of reimbursing the students. (ICE did not respond to requests for comment.)

If these students had been left to their own devices, Talluri says, it may not have occurred to them to switch. One reason they did so was because ICE paid their fellow students up to $20,000 to aggressively recruit them, per its January indictment.

Entrapment requires ensnaring someone who did not have a predisposition to commit an illegal act by misleading or lying to them. It's unclear whether what ICE did falls under that definition because the students aren't talking to the press. But even if it were, they couldn't sue ICE because the loss of visa and deportation aren't considered criminal penalties requiring any kind of due process.

The fundamental question, however, is what the government hoped to accomplish with this elaborate scheme. Even from a pure enforcement standpoint, to the extent that ICE considers visa mills a problem, it would make more sense for it to go after existing visa mills rather than launching additional fake ones of its own. Instead of turning students into recruiters by throwing temptation in their way, ICE could have gone after professional recruiters. Nothing ICE has done so far has put a single university or recruiter out of business.

"If ICE investigated these universities," notes Stuart Anderson of the National Foundation for American Policy, a pro-immigration think tank, "we would at least understand the true extent and nature of this problem."

This would help protect foreign students from being scammed too. Very often, those accused of being visa mills or diploma mills aren't totally fake. They skirt the law, doing the bare minimum in terms of holding classes and fulfilling other requirements to get their SEVP certification so that they can hand foreign students the necessary paperwork for their student visas and cough up money to enroll. However, if the federal government subsequently rescinds the accreditation of these universities or even just becomes suspicious of them, their students run into big trouble. If they travel abroad, they can have difficulty re-entering the country. Many face difficulties upgrading their student visas to H-1Bs when they land jobs.

Reddy says he gets calls from foreign students in such situations seeking advice "practically every day." He has started hosting weekly video calls offering free consultations and scores of foreign students sign up. These universities victimize foreign students, he laments. And instead of rescuing them, ICE is victimizing them too.

Here's What Happened When Other Countries Rolled Back Abortion Rights

The FDA's War on Juul Will Kill People