One lesson of 2016's presidential election was that Democrats needed to do a better job courting socially moderate working-class voters who disdain woke progressivism—the kinds of voters who hate political correctness and are distrustful of the social elites who enforce it. This demographic flocked to Donald Trump, handing him narrow victories in the key swing states that decided the election.

This is a phenomenon that could very well repeat itself in 2020, if a recent New York Times poll is any evidence. The survey shows Trump losing to Joe Biden, the comparatively moderate former vice president, but besting both Sens. Elizabeth Warren (D–Mass.) and Bernie Sanders (I.–Vt.).

The poll homed in on six states that will likely decide the election: Michigan, Pennsylvania, Wisconsin, North Carolina, Arizona, and Florida. Here's what they found: 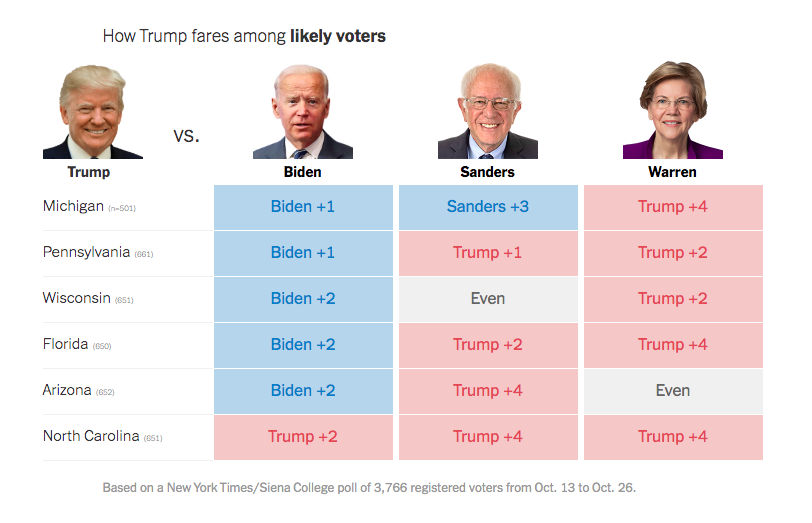 "The Times/Siena results and other data suggest that the president's advantage in the Electoral College relative to the nation as a whole remains intact or has even grown since 2016, raising the possibility that the Republicans could—for the third time in the past six elections—win the presidency while losing the popular vote," writes The New York Times' Nate Cohn.

As Cohn notes, we are still a year away from the election and a lot could change. But historically, these kinds of head-to-head polls have been very accurate, even when taken a year in advance. "On average over the last three cycles, head-to-head polls a year ahead of the election have been as close to the final result as those taken the day before," writes Cohn. And Trump's base of support has proven remarkably stable over the course of his presidency, suggesting that new developments over the next year might not effect his standings.

What these numbers really show, though, is that the strategy adopted by most of the major Democratic candidates—running to the left on virtually every issue—is dangerous. The most notable exception, Biden, is the best bet to beat Trump. Warren, who more closely embodies the left on both economic and cultural issues, could very well lose the election because she's just too woke for a small number of key swing voters in Michigan and Pennsylvania. There aren't a lot of people who would vote for Biden over Trump but not Warren over Trump, but there may just be enough of them to make this president a two-termer if she gets the nomination.

"Of voters who support Mr. Biden but not Ms. Warren, 52 percent agree with the statement that Ms. Warren is too far to the left for them to feel comfortable supporting her for president, while 26 percent disagree," the poll found.

The Democrats really need to treat this like a wake up call. So far, most of the candidates have behaved as if the key to ultimate victory is mobilizing Oberlin College students. While some candidates have expressed skepticism about Medicare for All, on a host of other progressive policy issues—the Green New Deal, gun confiscation, whether transgender child activists should pick the next secretary of education—the debates have seemed like a competition to be the most woke. Beto O'Rourke, who recently dropped out of the race, went as far as to say that churches should lose tax-exempt status for opposing gay marriage. His pivot, from a moderate Democrat who performed well against Ted Cruz in the 2018 Texas Senate race to an out-of-touch progressive scold, predictably doomed him.

An extremely progressive Democrat could very well wipe the floor with Trump in the national popular vote. After all, most anti-Trump people are going to vote for the Democratic candidate regardless. But the national popular vote did not make Hillary Clinton president, and it is just as irrelevant to this election. The Democrats need to pay attention to the swing states, where there is indeed a cost to running so far to the left.