Being a follow-up to a movie that came out 10 years ago, Zombieland: Double Tap could be said to have an undead problem of its own. Why is this movie lurching toward us at this late date? Really, how strong could audience demand for it still be? And how much is there that's new in the wisecracking, blood-gargling Zombieland world to stir up fresh consumer interest?

Very little, actually. But that's not a huge problem. Returning director Ruben Fleischer and his writers (Rhett Reese and Paul Wernick, now joined by Dave Callaham) have delivered a payload of gags that are once again nonstop and mostly pretty funny, and a new character who's truly a hoot. The movie has shortcomings—the unnecessary return of another star from the first film among them—but believe me, there are much less entertaining ways to spend 99 minutes than taking in this picture.

As the movie opens, our code-named protagonists—Columbus (Jesse Eisenberg), Tallahassee (Woody Harrelson), Wichita (Emma Stone) and her sister Little Rock (Abigail Breslin)—are still on the road, heavily armed and blowing away gut-munchers at every turn. In Washington, after an overnight at the trashed White House, the two women sneak away (Wichita has been weirded out by Columbus's romantic interest), leaving the men to their own devices. Later, in an abandoned mall, Columbus encounters another still-human refugee, a nattering ditz in a pink fake-fur jacket with a voice like a poorly played kazoo. Her name is Madison (Zoey Deutch, of The Politician), and she's both very cute and quite hopeless. ("You know why she's still alive?" Tallahassee asks Columbus. "Because zombies eat brains….")

This is an inauspicious time for Wichita to return, but she does, bearing news that her sister Little Rock has run off with a beardy guitar person called Berkeley (Avan Jogia). All three set off in search of these two, with Madison tagging along. Making their way from D.C. to Memphis, they camp out at Graceland, the old Elvis estate—now fallen into dystopian disrepair—then stop in at the nearby Hound Dog Hotel, where the proprietor (Rosario Dawson) tells them that Little Rock and Berkeley have already moved on. Soon we see where: Berkeley has taken Little Rock to the hippie commune where he lives, an improvised fortress filled with drum circles and hacky sack aficionados, where weapons are forbidden ("No guns, just hugs" is the motto) and the only approved fighting is against racism and sexism. Then—wouldn't you know it—an army of ravening zombies attacks.

The movie is maybe a little too nice for its own good. The hippies we see here have every attribute necessary to make them insufferable, but in the end they're depicted only as sweet, well-intentioned doofuses. On the other hand, there's a wild section in the middle of the film in which Tallahassee and Columbus come up against another zombie-fighting team—Albuquerque (Luke Wilson) and Flagstaff (Thomas Middleditch)— who are their virtual doppelgängers. (Columbus and Flagstaff instantly bond over their shared mania for Terminator minutia.) And Zoey Deutch, who is missed every minute she's not around, is a virtuoso Valley Girl for a new audience.

Zombieland: Double Tap might not be a movie anyone was crying out to see, and of course there's no way it could be the happy surprise that its predecessor was. But fans of bloody horror comedy could do a lot worse than this picture. And no doubt soon enough will. 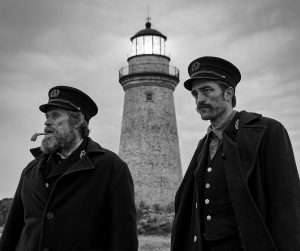 The Lighthouse is a movie designed to shiver your timbers and fog your mind. It's a masterful exercise in pure, unnerving atmosphere, shot in rich, inky black-and-white and presented in a boxy format that recalls the earliest silent films—perfect for the picture's setting in the late 19th Century. There's a story, of sorts, but its outline is only suggested, dabbed at, teased. Nothing is certain beyond the dark and stormy nights and swollen seas and crashing breakers amid which the action—if that's the word—unfolds.

Director Robert Eggers, a onetime production designer deservedly acclaimed for his wonderfully strange 2015 film The Witch, has gone to a great deal of trouble to create the world of this movie. In order to relate the tale of two men—an old sea dog named Thomas Wake (Willem Dafoe) and a gloomy younger man named Ephraim Winslow (Robert Pattinson)—as they growl and curse and get on each other's nerves while tending a remote lighthouse on some unspecified stretch of rocky northeastern coast, Eggers built a for-real lighthouse in Nova Scotia, and then let his gifted cinematographer Jarin Blaschke light it up to sumptuous effect.

Thomas Wake is the actual lighthouse keeper—the tender of the great Fresnel lens at the top of the stark white tower. Winslow is his new assistant, a former Hudson Bay logger with a vague background and a longing to find a place for himself in the world. He and Wake are here for a four-week tour of duty—and Winslow soon realizes, as he watches Wake drink and fart and suck at his little clay pipe, that it's going to be a very long four weeks. He wonders what happened to Wake's previous assistant. Went mad, Wake says, and died.

Wake forbids Winslow to enter the lookout room at the top of the lighthouse, for no reason he feels like stating. Instead, he keeps his assistant busy oiling machinery and stoking fires and pushing coal-filled wheelbarrows around outside in the muck and the pouring rain. Through all of this, the film's soundtrack reverberates with what sound like foghorns of the gods, set amid Mark Korven's ravishing score.

The movie slowly splinters into a dark phantasmagoria. Winslow isn't a drinking man, but the alcoholic Wake soon has him knocking back great sloshes of whiskey (and when the whiskey runs out, kerosene). The island on which they're stuck becomes a malign presence, filled with spectral sea gods, squirming tentacles, and unexpected mermaids (and mermaid sex, of a sort). The seagulls turn increasingly hostile, but Wake warns the irritated Winslow never to kill one—they contain the souls of dead sailors.

As the weeks slowly pass, Winslow's personality begins to crater. He and Wake pass the long nights drinking and dancing in their cramped quarters. After one particularly drunken revel, Winslow comes to with his pants around his ankles and Wake sprawled on the floor nearby. Both men's lives begin to blur. "How long have we been on this rock?" Wake asks desperately. "Five weeks? Two days?"

I have to admit to a similar feeling toward the end of this movie. It's a beautiful and passionate piece of work, but it's somewhat punishing, too. You leave marveling at Dafoe and Pattinson's ferocious commitment to these murky characters—has either of these actors ever been better? —and wondering how many possible stories Eggers and his brother Max (who cowrote the script) might have intended to tell, but never stated outright. You may not want to sit through this movie twice, but it's likely that scenes and shots from it will keep re-running in your mind for a considerable time to come.

Americans Want Racial Diversity More Than Ever Before

Christian Britschgi | From the November 2021 issue