Groups raising "awareness" about human trafficking seem to occupy one of two categories: the merely ineffective and the actively harmful. Those in the first category tend toward public spectacle, like standing together with tape over their mouths (are you aware, yet?), while those in the latter category find ways to make it easier for cops to arrest sex workers. Falling somewhere between these two is a new project out of California Polytechnic State University.

And how, pray tell, are they doing that? By building a virtual massage parlor for cops, of course.

It seems that upon having bought into the idea that massage businesses are hotbeds of human trafficking and sex slavery, Cal Poly students decided that building such a place in virtual reality could help police. The creation is meant to be used to "train law enforcement on different evidence and different things to look for," Marco Zuniga, a 2019 Cal Poly grad who worked on the project, told KCOY12.

Zuniga said he got the idea from the California Cybersecurity Institute, where he worked while he was in school. Apparently, the institute—a "partnership among academia, industry and government" that's affiliated with Cal Poly and the California National Guard—employs a fake physical massage parlor to train law enforcement.

As with so many programs designed to train people on the "signs" of sex trafficking, the virtual massage parlor really just pinpoints signs that prostitution or other sex work might be happening—or that a business might employ migrant workers.

"Passports, bus tickets, and even the pricing are clues purposely sprinkled around the place," says KCOY12. Lower than average prices are allegedly a tell.

While these may, in fact, be signs of sex work and/or immigrant labor, they are all incredibly dubious signs of sex trafficking. Plenty of people have passports and take buses without being traffickers or victims. And plenty of independent and immigrant-owned massage places offer lower prices because they forego the frills associated with fancy spas and corporate massage chains. 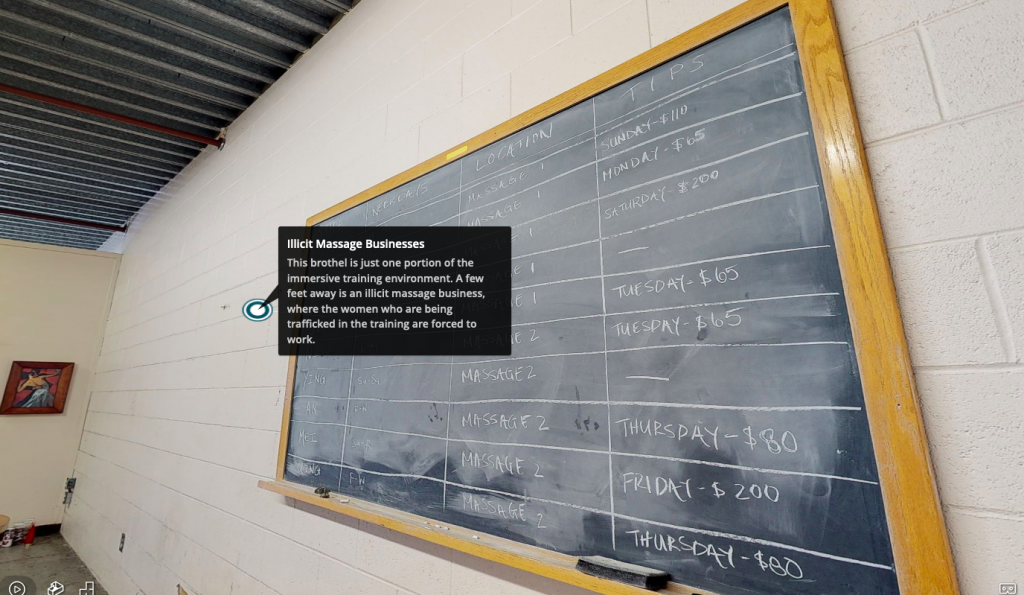 But let's ignore that for a moment. What's more astonishing is the idea that cops need some special simulated space—be it the physical massage-parlor model at CCI or this virtual reality program—to learn such simple tips.

Wouldn't it be a lot less time-consuming and more cost-effective just to tell law enforcement, "Hey, look for low prices and keep an eye out for stray passports and bus tickets?"

Alas, the massage parlor simulations may be among the more benign "anti-human trafficking" efforts out of the California Cybersecurity Institute, which partners with and gives training to many law enforcement agents. Its operations coordinator, Danielle Borrelli, is even a subcommittee chair with the San Luis Obispo County District Attorney's Human Trafficking Task Force.

Borrelli's theories of how to spot exploitation are even worse than those of the students CCI trained; they're more oriented toward simply catching sex workers and calling it rescue work. Talking to Central Coast Public Radio in August, she warned about "condoms and other paraphernalia" in trash cans and "a lot of makeup lying around."

Over the summer, CCI trained officials from across California in this so-called wisdom and even provided "a live, immersive anti-human trafficking set design on the conference floor" at the California Peace Officers Association conference.

An article on the immersive training stated that "passports, makeup, and leftover takeout boxes are scattered around the room giving participants important clues that sex trafficking is occurring." Because eating takeout is apparently suspicious now, too.

At least one CCI staffer admits this is a fantasy scenario. Interactive Communications Coordinator Ciera Dixon, who helped build the set, described it as "building your own little world for people to suspend disbelief when entering the experience."

Borrelli, who calls the VR project a "Learn by Doing pedagogy," has praised the use of "web crawling technology" and photo recognition software in anti-human trafficking operations. Recently, these tools were used by Defense Department and NASA scientists to scan, archive, and extract data from millions of sex worker ads. Borrelli said that next year CCI plans to launch its own software program that can be used by law enforcement worldwide.