Environmental scientist Jesse Ausubel remembers the moment his research trajectory changed. Over dinner one night in 1987, his friend and colleague Robert Herman, a physicist with a wide range of interests, wondered aloud, "Are buildings getting lighter?" That apparently simple question inspired the pair to begin looking into the "material intensity" of the modern world.

In 2015, Ausubel published an essay titled "The Return of Nature: How Technology Liberates the Environment." He had found substantial evidence not only that Americans were consuming fewer resources per capita but also that they were consuming less in total of some of the most important building blocks of an economy: things such as steel, copper, fertilizer, timber, and paper. Total annual U.S. consumption of all of these had been increasing rapidly prior to 1970. But since then, consumption had reached a peak and then declined.

This was unexpected, to put it mildly. "The reversal in use of some of the materials so surprised me that [a few colleagues] and I undertook a detailed study of the use of 100 commodities in the United States from 1900 to 2010," Ausubel wrote. "We found that 36 have peaked in absolute use…Another 53 commodities have peaked relative to the size of the economy, though not yet absolutely. Most of them now seem poised to fall."

A few years earlier, a writer and researcher named Chris Goodall had noticed something similar in the United Kingdom's Material Flow Accounts, "a set of dry and largely ignored data published annually by the Office for National Statistics," as the Guardian put it. He summarized his findings in a 2011 paper titled "'Peak Stuff ': Did the UK Reach a Maximum Use of Material Resources in the Early Part of the Last Decade?"

Goodall's answer to his own question was, essentially, yes: "Evidence presented in this paper supports a hypothesis that the United Kingdom began to reduce its consumption of physical resources in the early years of the last decade, well before the economic slowdown that started in 2008. This conclusion applies to a wide variety of different physical goods, for example water, building materials and paper and includes the impact of items imported from overseas. Both the weight of goods entering the economy and the amounts finally ending up as waste probably began to fall from sometime between 2001 and 2003."

Goodall was eloquent about the significance of dematerialization: "If correct, this finding is important. It suggests that economic growth in a mature economy does not necessarily increase the pressure on the world's reserves of natural resources and on its physical environment. An advanced country may be able to decouple economic growth and increasing volumes of material goods consumed. A sustainable economy does not necessarily have to be a no-growth economy."

I agreed with Goodall about the significance of economy-wide dematerialization, especially because the United Kingdom and the United States were the leading economies of the Industrial Era—a period that was defined by an unprecedented and extraordinary rise in the use of natural resources and other exploitations of the environment. If those two countries could reverse course and achieve substantial dematerialization, it would be a fascinating and hopeful development.

It would also be surprising, because it would mean that something fundamental about the mainstream understanding of how growth works would be incorrect. Most of us carry around an implicit or explicit belief that because humans always want to consume more, we will use more resources year after year to satisfy these wants. Technologies that allow us to make more efficient use of resources will not let us conserve resources, because we'll just use the technologies to let us consume even more—so much more that overall resource use will continue to rise.

This was the clear pattern until 1970. What could possibly have caused it to change? Moreover, if absolute dematerialization was a real and durable phenomenon, were there any interventions that individuals, communities, and governments could make that would help accelerate and spread it?

Fortunately for anyone interested in dematerialization, a lot of high-quality evidence exists about resource consumption over time in America. Much of it comes from the U.S. Geological Survey (USGS), a federal agency formed in 1879 and tasked by Congress with "classification of the public lands, and examination of the geological structure, mineral resources, and products of the national domain."

That examination of mineral resources is a boon to anyone interested in dematerialization, because since the start of the 20th century, the USGS has been collecting data on the use of the most economically important minerals in America. Of particular interest is the survey's yearly estimate of "apparent consumption" of each mineral.

This consumption takes into account not only domestic production of the resource but also imports and exports. For example, to calculate America's total apparent consumption of copper in 2015, the USGS would take the amount of copper produced in the country that year, add total imports of copper, and subtract total copper exports.

The survey's data tell a fascinating story. To understand it, let's start with metals, one of the most obviously important materials for any economy. Here's total annual consumption from 1900 to 2015 of the five most important metals in the United States. A reminder: This is not annual consumption per American. This is annual consumption by all Americans—the total tonnage used year by year of these metals.

All of these metals are "post-peak" in America, meaning that the country hit its maximum consumption of each of them some years ago and has seen generally declining in use since then. The magnitude of the dematerialization is large. In 2015 (the most recent year for which USGS data are available), total American use of steel was down more than 15 percent from its high point in 2000. Aluminum consumption was down more than 32 percent and copper 40 percent from their peaks.

This dematerialization becomes even more impressive when consumption of resources in the United States is compared to the country's economic growth. Note that a huge decoupling has taken place. Up to 1970, consumption of metals in America grew just about in lockstep with the overall economy. In the years since 1970, the economy has continued to grow pretty steadily, but consumption of metals has reversed course and is now decreasing. We're now getting more "economy" from less metal year after year. We'll see a similar great reversal in the use of many other resources.

America is an agricultural powerhouse—the world's largest producer of both soybeans and corn and fourth-largest producer of wheat. Fertilizer is, as we've seen, essential for growing crops. So here's the country's total consumption over time of fertilizer, water, and cropland. Instead of GDP, this graph charts total U.S. crop tonnage.

Here again, output (crop tonnage) used to be tightly linked to inputs (water and fertilizer). But then that relationship changed, and we're now getting more from less. Fertilizer use is down almost 25 percent from its 1999 peak, and by 2014 total water used for irrigation had decreased by more than 22 percent from its maximum in 1984. Total cropland has also fallen, to levels rivaling the lowest points of the previous century.

Building structures and infrastructure requires a lot of resources, so let's look at total consumption, according to the USGS, of the most important building materials. Let's also include data on timber use from the U.S. Department of Agriculture and throw in paper for good measure.

Here I see two different stories. The first is about building materials—cement, sand and gravel, and stone. Consumption of all of these peaked in 2007 and has dropped sharply since. But the sharp drop-off is surely because of the Great Recession, which hit the construction industries particularly hard. As construction recovers, we may find that we are not post-peak in these materials. But I predict that we're forever post-peak in our use of both wood and paper. Total timber use is down by a third and paper by almost 20 percent since their high points.

Are these graphs representative of what's been going on in the American economy as a whole? They are. Of the 72 resources tracked by the USGS, from aluminum and antimony through vermiculite and zinc, only six are not yet post-peak. Of these, we spend by far the most on gemstones. We Americans apparently have a bottomless thirst for bling. If shiny ornamental stones are excluded from the analysis, then more than 90 percent of total 2015 resource spending in America was on post-peak materials.

American consumption of plastics, which is not tracked by the USGS, is an exception to the overall trend of dematerialization. Outside of recessions, the United States continues to use more plastic year after year in the form of trash bags, water bottles, food packaging, toys, outdoor furniture, and countless other products. But in recent years, there has been an important slowdown.

According to the Plastics Industry Trade Association, between 1970 and the start of the Great Recession in 2007, American plastic use grew at a rate of about 5.2 percent per year. This was more than 60 percent faster than the country's GDP grew over the same period. But a very different pattern has emerged in the years since the recession ended. The growth in plastic consumption has slowed down greatly, to less than 2 percent per year between 2009 and 2015. This is almost 14 percent slower than GDP growth over the same period. So while America is not yet post-peak in its use of plastic, it's quickly closing in on this milestone.

Finally, let's look at total energy consumption combined with greenhouse gas emissions, which are the most harmful side effect of generating energy from fossil fuels.

I was surprised to learn that total American energy use in 2017 was down almost 2 percent from its 2008 peak, especially since our economy grew by more than 15 percent between those two years. I had walked around with the unexamined assumption that growing economies must consume more energy year after year. This turns out not to be the case anymore—a profound change. Energy use went up in lockstep with economic growth in America for more than a century and a half, from 1800 to 1970. Then the increase in energy use slowed down, and then it turned negative—even as the economy kept growing. Over the last decade, we've gotten more economic output from less energy.

Greenhouse gas emissions have gone down even more quickly than has total energy use. This is largely because we have in recent years been using less coal to generate electricity and more natural gas, which produces 50–60 percent less carbon per kilowatt-hour.

The conclusion from this set of graphs is clear: A great reversal of our Industrial Age habits is taking place. The American economy is now experiencing broad and often deep absolute dematerialization.

Is the rest of the world dematerializing? It's a hard question to answer definitively because there's no equivalent of the detailed and comprehensive USGS data for countries other than America. There is evidence, though, that other advanced industrialized nations are also now getting more from less. Goodall, of course, found that the United Kingdom is now past "peak stuff." And Eurostat data show that countries including Germany, France, and Italy have generally seen flat or declining total consumption of metals, chemicals, and fertilizer in recent years.

Developing countries, especially fast-growing ones such as India and China, are probably not yet dematerializing. But I predict that they will start getting more from less of at least some resources in the not-too-distant future. 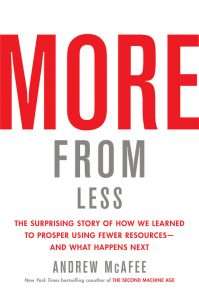