Car horns, police whistles, and people chanting "The polar bears are on fire!": These were the sounds of today's "climate strike" in Washington, D.C.

As the Global Climate Summit, a United Nations–sponsored event, was beginning in New York City, several groups of climate activists took to Washington's streets to profess their support for stricter regulation of the environment. Marching down and blocking off streets with dozens of police units in tow, an estimated 1,150 protesters passed out fliers and shouted slogans. Dozens were reportedly arrested for blocking traffic. 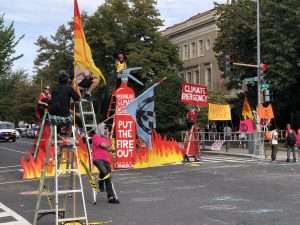 Kaley, a recent college graduate who majored in environment science, was there with her group, Extinction Rebellion. She enthusiastically expressed her support for a host of policies, including a more aggressive carbon tax and reparations to indigenous people over energy projects, such as the Keystone Pipeline, that she said had failed to consider historical treaty boundaries and impacts to tribal lands. Broadly speaking, Kaley said, Extinction Rebellion stands for "literally anything that keeps us alive."

Some commuters shared Kaley's commitment to Extinction Rebellion's message. One biker initially expressed exasperation with the traffic, saying "I'm just trying to get to work," but changed his tune when informed that the delay was due to climate activists. He even went so far as to state that he "might take the day off to support" the group.

But for some, the consequences of the commotion hit a little harder. "I might lose my job over this," one disgruntled motorist grumbled as he waited for a group of slow-moving protesters to pass. He expressed sympathy for the activists' goals but opined that they "fuck a whole lotta people over" by such tactics. As traffic started to move again, the man gestured to the hundreds of other motorists leaning on their horns and reversing up one-way streets and asked, "Why us?" 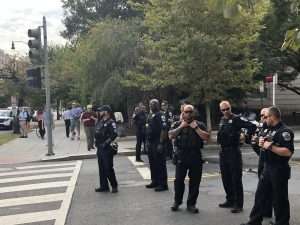 Extinction Rebellion recognizes that today's protests will cause problems for regular people. In fact, the pamphlet protesters hand out to passers-by read, "We understand that our actions are disruptive to your day, and we are truly sorry." But Kaley insisted to Reason that "one day of mission spreading far outweighs one day of inconvenience."

The pamphlet states that the protesters are "willing to make personal sacrifices" to change "business as usual." But today it was the commuters, not the demonstrators, who suffered the inconveniences.