In the near future, for the usual all-too-human reasons, the beleaguered people of Earth are looking to the stars (ad astra in Latin) for hope and deliverance. But the stars appear to be looking back: a series of "power surges"—fierce cosmic storms—have killed some 43,000 people, and they're growing more frequent. The storms appear to be coming from somewhere near Neptune.

A celebrated astronaut, Major Roy McBride, agrees to join a military mission to get to the bottom of this mysterious phenomenon. Roy is the son of a legendary space explorer named Clifford McBride, who was the commander of something called The Lima Project. Clifford set off into space 29 years ago, on a ship that disappeared 16 years into its mission. Commander and crew were long presumed dead, but now the shadowy generals who've recruited Roy McBride inform him that they think his father is still alive, and they want Roy to send him a message. He's apparently located somewhere near Neptune.

Ad Astra, the new movie from James Gray (The Lost City of Z), naturally recalls any number of other sci-fi exercises, from 2001: A Space Odyssey (which set the Bakelite-gleam standard for decades of extraterrestrial adventures to come) to Gravity and Interstellar. But it also blithely appropriates the storyline of Apocalypse Now (earnest young officer dispatched to find rogue commander who's gone insane). And it lifts its best action sequence—a wild space-buggy chase across the surface of the moon—from the Mad Max movies.

So this is not a work of blinding originality. But that's no sin—it's still a great-looking picture (major credit to cinematographer Hoyte Van Hoytema and production designer Kevin Thompson). But the movie seems to feel that it can compensate for its basically recycled nature with endless po-faced pondering of tedious daddy issues. And it can't.

Brad Pitt, in the role of Roy McBride, anchors the picture in more ways than one. His low-key performance (he might be channeling Ryan Gosling at his most languorous) is both an asset and a burden. You can't take your eyes off him, not just because his star power is irresistible, but because most of his acting is being done with his eyes. On the other hand, his Roy is a character who's always mumbling or musing to himself, and you can't believe he keeps saying things like, "I don't know if I want to find him or finally be free of him." Or, even less stirringly, "Why go on? Why keep trying?"

There's some memorable imagery, however. Space-suited corpses floating silently in an abandoned ship. A "space antenna" that towers up from Earth into the stratosphere, awaiting communications from inquisitive aliens. (As Roy tumbles from this structure, dislodged by a power surge, we can feel his raw panic as he begins spinning uncontrollably.) There's also a nasty bit of simian hostility, set on a medical-research ship, that could be a highlight of any horror film.

But basically, this is a movie about a boy and his dad. Roy does have a wife (Liv Tyler), but she's left him because he's such a self-absorbed drag, so she's virtually never around. And while Roy's father (Tommy Lee Jones) is little-seen in the movie's early innings, he becomes a dark presence towards the end—after Roy has traveled from the moon (where he sheds an unnecessary character, a wizened ex-astronaut played by Donald Sutherland) to Mars (where he sends dad his message) to a fateful final journey that brings father and son face to face.

Here we come face to face ourselves with the movie's turgid philosophical core. Contemplating the father who abandoned his wife and son to pursue an obsession with the possibility of extraterrestrial life, Roy murmurs to us, "He could only see what was not there, and missed what was right in front of him." That's it. That's the big emotional reveal. I'd say it's the silliest thing in the movie, but then I'd have to leave out the ending (which I'm surprised no one did).

One Cut of the Dead 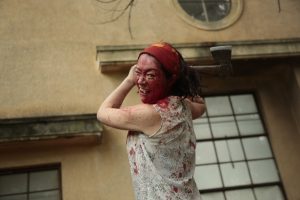 I would estimate the cost of making this giddy Japanese horror oddity to be, in U.S. dollars, approximately nothing. One Cut of the Dead is about a film crew shooting a cheap zombie movie in an abandoned factory, and it shows us, in one uncut, 37-minute take, what happens when the production is beset by actual zombies, terrifying the cast but delighting the director, who's all about the verité.

The one-take thing isn't especially impressive—it's basically juddery coverage of people running first this way and then that, too sloppy to be very interesting. And the occasional dialogue and action glitches are, at this point, just puzzling.

But then the movie turns into something else entirely, and it's kind of brilliant. Well, it's very clever. The story flashes back a month, and we see the director, Higurashi (Hamatsu Takayuki)—a low-level professional who prides himself on being "fast, cheap, but average"—accepting a commission to launch a new horror TV channel with a zombie story to be shot live, in one take. Now we get to witness the forced shortcuts and tiny disasters that plague all low-budget filmmaking. And we get to know more about the sweet-natured Higurashi, and about his daughter (Mao)—a film buff with ambitions, naturally—and his wife (Shuhama Harumi), a former actress who is recruited to play the makeup artist in the movie within this movie and proves herself to be a born action mama. We meet the scream-queen starlet (Akiyama Yuzuki) and her doltish love interest (Nagaya Kazuaki), and we marvel at Higurashi's unswayable conviction that he can somehow make a film with these people.

The movie's messy first act is explained—often hilariously—by the behind-the-scenes footage that follows, highlighting the screwups and missteps that compelled the various seat-of-their-pants improvisations that were required to fend off disasters. The picture gets funnier as it goes along, but there's more to it than laughs. In the end we're won over by director Ueda Shin'ichirô's obvious affection for low-budget esprit and for the unsung actors and crafts people who put so much effort into making movies that so often turn out to be not so great.