The hits just keep coming. Last week, the attorneys general of several states plus the District of Columbia and Puerto Rico announced formal antitrust probes into the market dominance of Facebook and Google. This is in addition to the ongoing Federal Trade Commission (FTC) and Department of Justice (DOJ) inquiries into the terrible two plus Apple and Amazon, as well as the House Judiciary Committee's investigation of Silicon Valley shenanigans.

Meanwhile, the top tech antagonist across the pond, EU Competition Chief Margarethe Vestager, just got appointed to a second term, with a promotion and expanded authorities to boot. 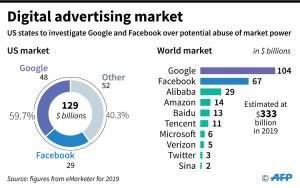 There are actually two state-based probes underway. One of them consists of 48 states plus Puerto Rico and the District of Columbia and is aimed primarily at Google. Texas A.G. Ken Paxton, a Republican, leads the bipartisan effort, which intends to "investigate Google's overarching control of online advertising markets and search traffic that may have led to anticompetitive behavior that harms consumers."

The second, smaller effort sets its sights on Facebook. It is comprised of seven states plus the District of Columbia, and will be led by New York A.G. Letitia James, a Democrat. In addition to competitive concerns, the state Facebook probe will consider whether "Facebook's actions may have endangered consumer data, reduced the quality of consumers' choices, or increased the price of advertising."

No one should be surprised by these events, least of all the targets themselves. As the press has exhaustively detailed over the past few days, this is a predictable encore to the antitrust proceedings that gripped Microsoft in the 1990s. And then, as now, state A.G.s provided more oomph and investigatory ammunition to ongoing federal efforts against the top dog in tech.

But while we have the benefit of hindsight to pick apart the Microsoft decision, the antitrust efforts against today's techies are just getting started. These undertakings are still in the exploratory phase, and it is unclear what particular charges, if any, will make their way through the courts.

Right now, the problem is that these companies are big and that scares us. We think of recent missteps—particularly regarding privacy—and dump those negative feelings into the "break 'em up" bucket. But being big is not a crime. Rather, in the U.S., antitrust enforcers intervene in markets when firm activity is shown to harm consumers, like when a company agrees to fix prices or lower quality. Often, this is observed when a business exploits its market position to raise prices.

This "consumer welfare" standard becomes less straightforward when applied to digital platforms. It costs me $0 to use Twitter. Even though I don't use other social media platforms, there are plenty of options out there for me, and they would cost me $0, too. These platforms do charge advertisers money to put their wares in front of my eyeballs, but there seems to be a lot of competition there, too.

Part of the problem facing antitrust enforcement of technology companies is that it's difficult to define the relevant market. We lump Facebook, Google, and Apple as "technology" companies, but really, their services span many markets. They are variously advertising companies, telecommunications providers, media firms, cloud architecture platforms, storage companies, software-as-a-service providers, and digital libraries, among many other things. Yes, they are "big," but they face considerable competition in most or all of these domains.

What plan of attack will antitrust regulators choose? There are many options. Yelp has been chomping at the bit to take down Google for allegedly promoting its own services over Yelp's. The company has convinced European regulators of their crusade's righteousness, perhaps American counterparts will also train its sights on such possible anti-competitive prioritization.

The problem is that it's hard to prove that users don't simply prefer the native service over a competitor's. In the case of Yelp, maybe Google's review services really were superior. Should companies be required to promote inferior competitors, just to stay in the government's good graces? In general, basing your business model on the benevolent prioritization of your competitor's platform does not seem especially wise.

Or maybe antitrust regulators will go really retro and revive the browser war case for the app age. European regulators have already scrutinized the Google Play Store as an anti-competitive edge. Just as Internet Explorer coming pre-installed for free on Windows computers to Netscape's detriment was found to be a no-go, maybe the Play Store's default nature and app fees won't pass antitrust muster. There are similar criticisms with the Apple App Store.

The worst outcome would be one where the general animus against technology companies prevents a focused antitrust investigation. Perhaps these companies have engaged in activities that have harmed their customers. It is legal and legitimate for the authorities to investigate whether this is so.

But tying in unrelated concerns like "customer privacy" or "election integrity" risks turning these proceedings into an expensive and unproductive political spectacle. Already, state A.G.s have included language indicating this is a real possibility, particularly in the Facebook case. Not only would antitrust be an inappropriate tool to alleviate such concerns, these unconnected matters could distract the investigations from any legitimate inquiries.

If history is any guide, we shouldn't expect any resolutions any time soon. Antitrust efforts can last for more than a decade. Often, by the time regulators and the courts issue a ruling, yesterday's titan has already become a struggling has-been. Perhaps this will again be the case, and the normal but unpredictable swings of fickle consumer taste and market discipline will once more make this brouhaha redundant. But we can probably expect a lot of unfocused anger against technology in the meantime.