Less than 100 hours before the critical Super Tuesday vote in 2008's Democratic presidential primaries, Samantha Power, the Pulitzer-winning author of A Problem From Hell: America and the Age of Genocide, stared plaintively into the eyes of Armenian-American YouTube viewers and delivered a heartfelt testimonial to a "true friend of the Armenian people," Barack Obama.

"He's a person who can actually be trusted," Power declared with a palpable sense of wonder. Past presidents have shied away, she said, from the "sometimes hard truth-telling" of calling the Armenian genocide a genocide on April 24's National Day of Remembrance of Man's Inhumanity to Man. But not the junior senator from Illinois, as evidenced by his "very forthright statement on the Armenian genocide, his support for the Senate resolution acknowledging the genocide all these years later, his willingness as president to commemorate it, and certainly to call a spade a spade."

The U.S. had long refused to use the G-word to describe the Turkish slaughter of about 1.5 million Armenians from 1915 to 1923, and Power—a self-proclaimed "genocide chick"—had long squeezed maximum symbolism out of that fact. If we can't summon the courage to offend a NATO ally's sensitivities about crimes committed a century ago, the argument went, how on earth will we stop the next Rwanda? As Obama himself said on the campaign trail, "America deserves a leader who speaks truthfully about the Armenian genocide and responds forcefully to all genocides. I intend to be that president."

Fourteen months after Power's promise, Obama finally got his big chance to deliver. And he whiffed.

"I have consistently stated my own view of what occurred in 1915, and my view of that history has not changed," the president said at his first April 24 commemoration, without further elaboration. He had done a test-run earlier that month during a visit to Turkey: "What I want to do is not focus on my views right now, but focus on the views of the Turkish and the Armenian people." So much for hard truth-telling.

I have waited a decade for Power's accounting of that reversal. Not out of any sense of schadenfreude—I agree with her that Turkish irrationality should not dictate American diplomatic language. But a promise broken that brazenly could be a teaching moment for the "humanitarian interventionists," of whom Power is arguably the leading avatar. Did Obama's first-term human rights honcho on the National Security Council and second-term ambassador to the United Nations, a woman who is as likely as anyone alive to be the next Democrat-appointed secretary of state, ever consider that mobilizing U.S. force in the idealistic cause of halting genocide inevitably requires such grubby logistical concerns as making sure not to piss off the owners of the Incirlik Air Base? Might there be a corrupting paradox in protecting human rights at the point of a gun? 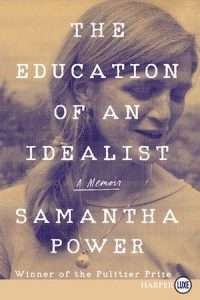 So it was with some eagerness that I cracked open Power's new memoir, The Education of an Idealist, whose very name suggests a collision between highbrow principle and low-down politics. And sure enough, there's a whole chapter titled "April 24," with a personal twist at the end so jaw-dropping that I won't spoil it here. But whether it's the war of words she lost on the National Day of Remembrance or the far more consequential war in Libya that she successfully argued that America should enter, the muddled track record of applied Powerism occasions a troubling lack of introspection from its intellectual architect.

"But he was the President of the United States," Power exhaustedly concludes, after detailing her failed attempts to get Obama to utter the word "genocide" in 2009. "No matter how hard I tried, I would never be able to put myself in his shoes, or appreciate the variables he was weighing." The realpolitik reticence that once took an entire book to denounce now requires just two sentences to wave away, and then it's on to the next crisis.

And Lord, are there crises. The woman who at age 23 cold-called Deputy Secretary of State Strobe Talbott at home at 9:00 at night to bend his ear over Bosnia, who wore a "REMEMBER SREBERNICA" T-shirt at the 1995 New York City marathon and was as influential as any non-celebrity in whipping up concern over atrocities in Darfur, had no shortage of global emergencies on her watch during the Obama years. Kony! Crimea! Ebola! (The latter is actually one of the book's most convincing case studies in Obama/Power leadership and diplomacy that worked.)

But as with most champions of the just-DO-something approach to governance, what haunts the memoirist the most is not What did we do wrong? but Why couldn't we do more? Thus, the central dilemma in the book is Obama's refusal to enforce his "red line" against Syrian dictator Bashar Al-Assad in 2013, not the allegedly genocide-preventing overthrow of Libyan dictator Muammar al-Qaddafi two years earlier.

Since Libya was the application of Power's ideas and Syria the unmet aspiration, you might think she would identify more connective tissue between the roads taken and not. After all, both countries plunged into an instability whose effects are still being felt today, including the largest refugee crisis since World War II, which Power discusses movingly near the close of her book.

Obama's rationale for Libya further lowered the bar for future war. "If we waited one more day," the president claimed in March 2011, "Benghazi, a city nearly the size of Charlotte, could suffer a massacre that would have reverberated across the region and stained the conscience of the world." Instead, that city became synonymous with the murder of four Americans on September 11, 2012.

So what education did the idealist glean from a genocide prevention gone wrong? One strikingly similar to that learned by neoconservatives after Iraq: We didn't try hard enough to win the peace. "Once it became clear that European efforts to shore up the transition were falling short," she concludes, "the US government could have exerted more aggressive, high-level pressure on Libya's neighbors to back a unified political structure and cease their support for the competing opposition factions." Still, "neither at the time nor presently do I see how we could have rejected the appeals of our closest European allies, the Arab League, and a large number of Libyans." After all, "we had run out of further nonmilitary steps."

And Americans wonder why we're constantly at war.

I have some familiarity with the milieu from which Power sprang. Our life trajectories as sports-fanatic college newspaper reporters were both radically redirected by the same news event: an anonymous Chinese man stopping a line of tanks in Tiananmen Square. (Her recollection—"For the first time, I reacted as though current events had something to do with me"—describes my reaction precisely.) As a direct result of the ensuing revolutions of 1989, both of us wound up the next summer both in celebratory Prague and fracturing Yugoslavia. When Power returned to the latter region to try her hand at being a war stringer, one of the key figures helping her was my ex-girlfriend. Her writing about these times, and some of the tragedies of her Irish-immigrant experience in the United States, is in places quite moving.

The Western Gen Xers who flooded into post-communist Europe tend to have a very different view of the world and of the exercise of U.S. power than the normies back home or even expats in other parts of the globe. We basked in the idealized appreciation for American moral leadership against the "evil empire" of Soviet communism, rather than the far more mixed verdicts we would have received in Africa or Central America. While most Americans were eyeing peace dividends and bickering over half-baked expeditions in Somalia and Haiti, we were horrified on a daily basis by Western inaction in the face of the slaughter in Sarajevo. "A specific group of people in a specific place…were being pulverized," Power recalls, "and I wanted to do something to support them….I found myself rooting for the first time in my life for the United States to use military force."

Many books are yet to be written about how America in the 1990s transformed so quickly from uncertain actor to uncontested global cop, but Yugoslavia, as it has been so often in its unhappy history, was central to an empire's story arc. From the outbreak of hostilities in Slovenia in the spring of 1991 all the way through the summer of 1995, Washington clearly wished that the countries of the rapidly integrating Western Europe would clean up the mess in their own back yard. Instead, Paris and Bonn and London took turns making diplomatic pratfalls, while the blue helmets of the United Nations looked on helplessly at the daily carnage. It was only when America fired up the war planes in 1995 that the participants became motivated to negotiate a settlement.

The lesson was learned, or so many of us thought: America has to lead. Force can be effectively applied, with minimal U.S. casualties, to halt the organized mass murder of civilians. In a world otherwise getting more free, democratic, prosperous, and peaceful by the minute (hey, it was the '90s!), some well-timed interventions here and there can nip potential catastrophes in the bud. Democratic internationalists and Republican neoconservatives were in basic agreement—if "never again" is to be taken seriously, America needs to draw some red lines and punish those who cross them, national sovereignty be damned.

With the benefit of hindsight, we can see where this road map leads: to one war after another, especially the disaster in Iraq. Power, to her credit, did not support the Iraq War, arguing correctly at the time that it "would render the world a much more dangerous place." But she did fall prey to some of the same myopia as the Bush administration. "I actually think that it's going to be a relatively clean intervention," she said in February 2003. "I may be in the minority in the human rights community in feeling that way, but having seen the Kosovo and the Bosnia and the Afghanistan interventions, I have some sense of that."

Worse, Power spelled out a doctrine for being more, not less, promiscuously interventionist: "My feeling is that an intervention in Iraq, even a unilateral one, is undoubtedly going to make Iraq a more humane place," she said. "As somebody who has looked at the relationship between state power and sovereignty on the one hand, and individual rights on the other, I have to say to myself if the human rights movement meant anything it meant that sometimes sovereignty can't be a shield, a protection for regimes that forfeit their claim to that privilege."

But some realism has crept into the worldview of 2019 Samantha Power. In her new book's afterword, gazing into the confusion of populist uprisings at home and abroad, the woman who might be our next secretary of state bemoans the interventionist default of foreign policy.

"Military force is seen as the 'go-to' tool in the US toolbox," she laments, echoing the recent critiques of such former Obama officials as Rosa Brooks. "Such a heavy reliance on our military is neither sustainable nor desirable. It is emblematic of a militarization of US foreign policy that concerns people across the political spectrum." During Power's time in government, she "felt the lasting damage caused by US government mistakes, particularly regarding the use of US military force. Irrespective of American intention, the government's sins of commission—but also those of omission—underscore the immense responsibility one takes on as a public servant, and the need for humility about one's judgments."

America's journey toward a more humble foreign policy has been thwarted time and again by the size of its toolbox. It's a lesson all of us idealists need to keep re-learning.