On August 15th, President Trump tweeted: "It would show great weakness if Israel allowed Rep. Omar and Rep.Tlaib to visit. They hate Israel & all Jewish people, & there is nothing that can be said or done to change their minds." 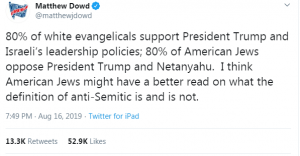 I'm not sure I've seen two sentences as replete with error, non sequitur, and faulty analysis.

As for Trump, his disapproval rating among American Jews has hovered consistently around 70%, though Gallup showed a 36% average approval rating in 2018. 70% is at least in the same universe as 80%, but it's still at best an exaggerated statistic. Moreover, there is a difference between "disapprove" and "oppose." I know many people, Jews and otherwise, who "disapprove" of Trump, but who are considering voting for him for reelection; most of those definitely will if the Democrats nominate Sanders or Warren. Do they count as "opposed?" In any event, you would think the chief political analyst for a major news network could do better than simply make up statistics, and Dowd's statistics for American Jewish "opposition" to Trump and Netanyahu were simply made up.

Let's go to non sequitur. Whatever the level of Jewish disapproval or opposition to Trump [much less Netanyahu], how is that responsive to Trump's claim that Omar and Tlaib hate Israel and "all Jewish people?" Putting Trumpian exaggeration aside, one can easily find Jewish people–again, I know many  of them–who strongly dislike, indeed, "oppose" Trump–who also (a) acknowledge the obvious, that Omar and Tlaib hate Israel–given that both oppose Israel's very existence, this is rather hard to deny; and (b) believe that Omar and Tlaib have engaged in antisemitic rhetoric, and that Omar, in particular, is very likely personally antisemitic. In fact, judging by my social media feed the relative lack of mainstream Democratic reaction to/sanction of Omar and Tlaib's hatefest on Israel and its supporters, often with antisemitic overtones, has really distressed many Jews, especially those who are moderate Democrats and therefore don't have any ideological interest in defending these radical Democrats. The backlash has been muted only because they find Trump so distasteful, and he  has entered the fray on the other side.

Here's another non sequitur: what do the white evangelicals, whose support for Trump Dowd leads with, have to do with anything? Are they supposed to be somehow the "opposite" of Jews, as if they are all antisemites? All the survey data I've seen suggest that conservative white evangelicals are no more likely to be antisemitic than Americans as a whole (no less a liberal than Abe Foxman said the same thing based on ADL data), and there is a strong streak of philo-semitism in the evangelical world, reflected in groups such as Christians for Israel and the International Fellowship of Christians and Jews.

Let's go on to faulty analysis. Dowd suggests that if 80% of Jews are opposed to Trump, it must be because Trump traffics in antisemitism. A review of the debate over whether Trump has contributed to antisemitism (as many Jews and others believe) or is a generally philosemitic president (as others believe) or both (!) is beyond the scope of this blog post. But here is a key point that ABC's chief political analyst should know: surveys consistently show about 70 percent of Jews are or lean Democratic; another 25 to 30 percent are or lean Republican. About 70 percent of American Jews disapprove of Trump. About 30 per cent approve of him. In short, one could predict the level of support Trump has among Jewish Americans with a great degree of accuracy simply from the partisan breakdown of American Jews. This means in turn, that there is no statistical basis for Dowd's suggestion that American Jews "oppose" Trump because of antisemitism. Rather, at most, it seems that Jews who are inclined to support Democrats interpret Trump's actions and remarks regarding Jews unfavorably, while Republican-leaning Jews do the opposite–on the assumption that few Jews who be favorably inclined toward someone they believed was trafficking in antisemitism.

Finally, even if one were inclined to (mistakenly) attribute American Jewish disapproval of Trump to American Jews' "better read" on antisemitism, what would one make of the fact that Trump is extremely popular among Jewish Israelis, with approval hovering around 70 percent? For that matter, what would one make of the fact that 88 percent of Haredi (ultra-Orthodox) American Jews, who because they wear visibly Jewish garb are most vulnerable to antisemitic assault, approve of Trump? Or that more generally, the more religiously observant an American Jew is, the more likely he is to approve of Trump? Does Dowd think that Reform and secular American Jews have a better handle on antisemitism than do Israeli Jews and than do American Haredi, Mordern Orthodox, and Conservative Jews?

Dowd's tweet (with over 50K likes!) tells me two things: first, Twitter is a terrible place to go for reasonable, accurate political analysis; and, second, when the chief political analyst for a Big 3 news network unabashedly peddles such garbage, mistrust of the "MSM," especially on the right, is far from baseless.

The Media Do Not Want You To Read, Share, or Discuss The New York Post's Hunter Biden Scoop

Journalists should correct the story rather than pretend it doesn't exist.