"A picture is worth a thousand words" is one of the dumbest aphorisms ever coined. Speaking as a former television producer, I'd say a picture takes a thousand words to explain. Take this much-circulated NASA satellite photo showing vast smoke plumes over the Amazon region: 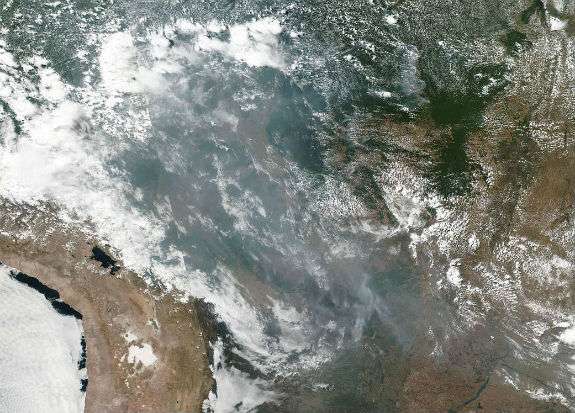 Combined with a report from the Brazilian National Institute for Space Research that says the agency had detected 39,194 fires in the region, a 77 percent jump up from the same period in 2018, that picture has launched alarmed headlines around the world.

"Amazon rainforest is burning at an unprecedented rate," declares CNN. The Daily Beast gives us "Record Number of Wildfires Burning in Amazon Rainforest." Here's NBC News: "Amazon wildfires could be 'game over' for climate change fight."

Interestingly, when NASA released the satellite image on August 21, it noted that "it is not unusual to see fires in Brazil at this time of year due to high temperatures and low humidity. Time will tell if this year is a record breaking or just within normal limits."

So why are there so many fires? "Natural fires in the Amazon are rare, and the majority of these fires were set by farmers preparing Amazon-adjacent farmland for next year's crops and pasture," soberly explains The New York Times. "Much of the land that is burning was not old-growth rain forest, but land that had already been cleared of trees and set for agricultural use."

It is routine for farmers and ranchers in tropical areas burn their fields to control pests and weeds and to encourage new growth in pastures.

What about deforestation trends?  Since the right-wing nationalist Jair Bolsonaro became Brazil's president, rainforest deforestation rates have increased a bit, but they are still way below their earlier highs: 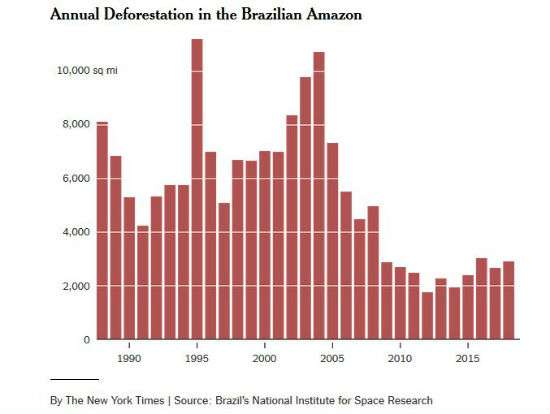 Various researchers have noted a U-shaped relation between environmental degradation and economic growth. As development takes off, levels of pollution and land degradation rise, but they begin to improve once certain thresholds of per capita incomes are attained. A 2012 study found, after parsing data from 52 developing countries between 1972 and 2003, that deforestation increases until average income levels reach about $3,100 per capita. As it happens, Brazilian per capita incomes reached $3,600 per capita in 2004,which is when deforestation rates began trending decisively downward.

While problematic deforestation is still taking place in the Amazon region, a 2018 study in Nature reported that the global tree canopy cover had increased by 865,000 square miles from 1982 to 2016. As Brazilians become wealthier, the deforestation trend in the Amazon will likely turn around toward afforestation, as it already has done many other countries.