If one reads both the secular and Jewish American media, one gets the impression that a virtual revolution is going on among the younger generation of American Jews. Focusing on various leftist and left-leaning Jewish groups, such as JStreet U, IfNotNow, Open Hillel, and Never Again Action, I've read dozens of articles suggesting that young Jews are overwhelmingly extremely progressive, hostile to the mainstream Jewish establishment for being too "conservative" (event though that establishment is overwhelmingly liberal on the standard American political spectrum), and in a state of rebellion against what they perceive to be the Jewish establishment's failure to adequately "resist" Donald Trump and to challenge "the occupation" in Israel.

This narrative makes some intuitive sense. After all, young Americans in general are more left-leaning than older Americans, and there the omnipresent left-leaning young Jewish cohort would logically be much bigger now than it was in more conservative eras. Top that off with the fact that the Reform movement has come to dominate American non-Orthodox Jewish religious life, and that this movement has increasingly blurred the lines between normative Judaism and left-wing politics.

And yet, a recent survey by the Democratic GQR polling firm, commissioned by the Jewish Electorate Institute, tells a different story. Here is the key chart: 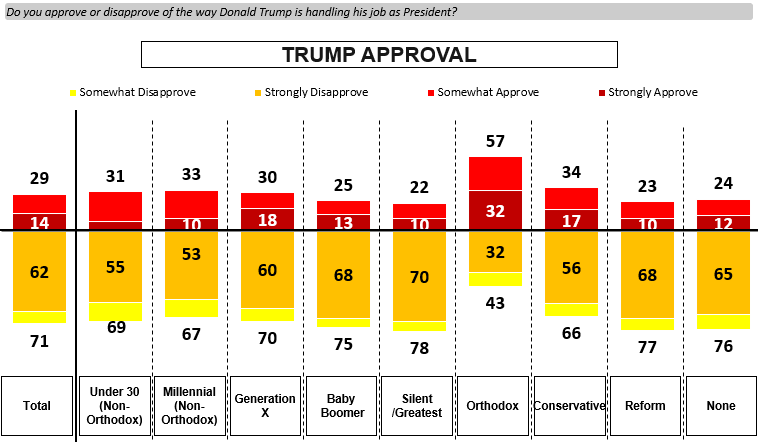 If true, this would be especially remarkable because young American Jews tend to not be "religious" and live in coastal urban areas, two demographic indicators that strongly predict hostility to Trump.

Of course, the JEI poll needs to be confirmed by other data. And it's entirely possible that it's both true that young Jews are more conservative/Republican/supportive of Trump, and that those who aren't are more leftist than prior generations. But various groups are pushing a narrative that the American Jewish establishment needs to become even more "progressive" if it doesn't want to lose the attention of young American Jews. In turns out that, if anything, the opposite might be true.

From the Archives: October 2020

Reason Staff | From the October 2020 issue