Here is an accurate description of a new study's conclusions: "As Donald Trump secured greater support from Republicans and as the 2016 general election neared, pro-Trump content produced by a Russian bot got more attention on Twitter."

The paper compares the popularity of Trump's candidacy to the popularity of more than 700,000 English-language tweets sent by various accounts linked to the Russian-based Internet Research Agency (IRA). The study's authors found that every 25,000 retweets of IRA-run Twitter accounts correlated to a 1 percent uptick for Trump in presidential election polls.

Correlated being the key word there. Because if you ignore the distinction between correlation and causation, you might end up drawing a conclusion like this: 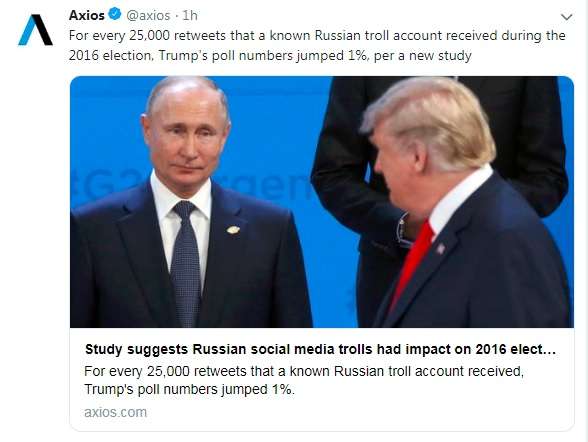 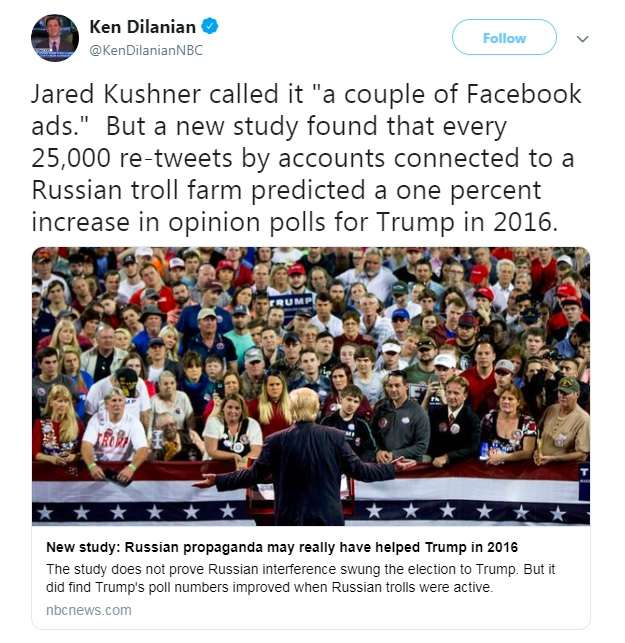 Those are good ways to fire up the #Resistance, but both are misleading interpretations of the study, which was published today by First Monday, a peer-reviewed journal dedicated to studying internet phenomena.

The study's authors themselves point out the limitations inherent in their analysis, which was intended to test "prediction, not causality." Indeed, they stress that "it seems unlikely that 25,000 re-tweets could influence one percent of the electorate in isolation."

More to the point, they caution that "any correlation established by an observational study could be spurious." Despite a strong correlation between Trump's popularity and increased Twitter-based interest in the Russian bot accounts, "There could still be a third variable driving the relationship between IRA Twitter success and U.S. election opinion polls," they write. "We controlled for one of these—the success of Donald Trump's personal Twitter account—but there are others that are more difficult to measure; including exposure to the U.S domestic media."

It would hardly be surprising to learn that more Americans became more engaged in politics as the 2016 election drew nearer, or that there would be a larger audience for pro-Trump content on Twitter as the primaries concluded and inter-GOP opposition to Trump's candidacy subsided. Indeed, the study finds that one major spike in both Trump's popularity and the attention received by IRA-run Twitter accounts was associated with the 2016 Republican National Convention. Historically, pretty much all presidential candidates have seen an increase in support after being officially nominated.

Now, it's certainly possible that Russian tweets changed some Americans' minds about who to support in 2016—though there's no reason to think those tweets were any more potent than content created by regular Americans or the campaigns themselves.

Blaming Trump's election on the magical power of Russian Twitter bots is seductive because it gets Americans off the hook for elevating an obviously unqualified candidate to the most powerful office in the world. If understanding Trump's victory was as simple as adding up the number of retweets on pro-Trump Twitter accounts, we'd be spared the more difficult task of dealing with the political and cultural forces—domestic ones—that put him in the White House.