It is now possible, and even probable, that the Toy Story films are the greatest movie franchise of the modern era. The series that launched Pixar as one of the great movie studios now comprises four movies, spread across the space of nearly a quarter century. And each one, including this week's Toy Story 4, is a masterpiece, or something pretty close.

It's hard to think of any other series that has gone on for this long at this level of quality, novelty, and sheer ingenuity. Each film works as a logical progression from the last, expanding the miniature toy world and tackling big new ideas. There are some formulaic aspects—wry humor, familial tenderness, dazzling chases, and intricate, mechanized set pieces that reinvent the ordinary settings of suburban family life as fantastic and thrillingly dangerous landscapes of adventure—but the series never feels staid or repetitive.

The scale of the action is balanced by the series' remarkable emotional intimacy: The films examine the inner lives of children, aging and decline, the purpose of life, and, in the new installment, the nature and origin of consciousness itself. These are silly children's movies, filled with talking toys and gentle humor that even a toddler can understand. But they are also, somehow, movies that ask big questions about what it means to be alive. It's probably an overstatement to call them philosophical treatises dressed up as animated blockbusters, but it's not totally wrong, either.

Toy Story 4 continues in this tradition, introducing a new character, Forky, created by a child at a school orientation. He's a simple thing: a spork with glued-on eyes, pipe-cleaner arms, and popsicle stick feet held on by a lump of clay. He's a stick figure, essentially, cobbled together by an anxious child in need of a friend, which is what he becomes.

After Forky is made, he gains life and consciousness, as the movie's other toys do, and must wrestle with his purpose in life. At first he can think of himself only as trash, which is, after all, what he is made of. But slowly, after much (hilarious) convincing by series protagonist Woody, he comes to see himself as a conscious being, a person with a purpose: namely, to look after the child who made and loves him. Forky then finds joy and meaning in his existence.

Toys, in this movie's worldview, are essentially guardian angels. They are brought to life by a child's imagination, and they exist to watch over their child owners, secretly helping to ease them through the challenges of growing up. But what happens when a toy has no child? What purpose can a toy have then?

That was a question explored in Toy Story 3, as Woody and the gang saw their longtime kid leave for college. That movie's answer was that there were always more kids in need of more toys. The same question returns here, but with a somewhat different answer. Sometimes toys can strike out on their own, and find their own purpose in life.

The chief proponent of this idea is Bo Peep, a supporting character in the first two films who becomes more central here. In the new movie's prologue, she is boxed up and carted away. Nine years later, Woody encounters her again, and finds that after a few years collecting dust in an antique shop, she now lives on her own, with her trio of helpful sheep and a cool ride. After learning to live alone, she's become competent and confident, an independent woman who takes charge and gets things done. This is her second act, and she has chosen to live it fully, outside the ordinary bounds of child-dominated toy-life. She is a study in worldly individualism. 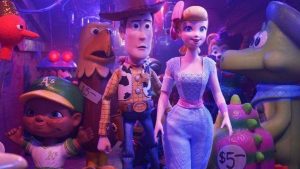 Toy Story 4 is in many ways a movie about existential angst and agency, duty and desire, with Bo Peep as the argument that toys can choose their own purpose, their own pleasure, their own lives and identities, without a child to guide them. Yet the pull of the child, and the genuine comforts that being owned by one can provide, is still strong. Are we what we are made to be? Or what we choose to be? The movie's answer amounts to: Yes.

If this all sounds rather heavy, especially for a couple hours of air-conditioned distraction, don't worry. It's not. On the contrary, Toy Story 4, like its predecessors, is a nimble, endlessly inventive delight.

A subplot involving a voiceless doll and her band of creepy toy henchmen who try to steal Woody's voicebox is delightfully ghoulish, a kind of G-rated horror movie smuggled into a kiddie comedy. There are a handful of new characters, all of whom are charming—but especially Duke Caboom, an Canadian Evel Knievel knock-off toy voiced by Keanu Reeves, a casting choice that manages to be a meta-joke unto itself.

Caboom's character drives a motorcycle that frequently comes in handy during the many action scenes, which remain one of the hidden strengths of both the franchise and the studio. The prologue contains a rainy rescue sequence that is shot and paced with the deftness of Steven Spielberg at his prime, and the rest of the film is structured as a series of electrifying, high-stakes set pieces set in and around a touristy encampment, each one staged with thrilling clarity and precision, as well as a keen sense of danger. In an era where putative action films dominate the box office, Pixar's perfectly executed sequences fly high over the rest. Toy Story 4 is the best action movie this year that doesn't feature Keanu Reeves murdering people in a hallway full of knives.

The action is aided by animation that represents a high water mark for computer-generated imagery. The original Toy Story was a significant technical accomplishment for its time, but it looked very much like a collection of simple shapes and textures, with difficult to render surfaces like hair and water carefully left off screen. It's amazing to see how much the technology has improved in the two and a half decades since.

The new film tackles the most complicated imagery with ease: An action scene set in a storm drain shows just how good Pixar's artists and coders have become at rendering water. But there's more on display than mere technical excellence. The animators manage to transform the most banal objects into works of stunning and evocative detail. About half way through, there's a brief moment when the characters, sneaking through a network "alleys" hidden behind antique-shop furniture, encounter a cobweb-covered power strip held in the air by a tangle of cords. The dust, the light, the different types of cords, the way the long plastic box hung half overturned in the air, just so—all seemed aesthetically considered in a way that is rare in any kind of art, much less something so popular and accessible. It was as if the animators had spent a lifetime considering the meaning of power strips, and somehow captured their deepest and purest essence with pixels. In Pixar's overscaled miniature world, this boring, everyday thing becomes an object of epic strangeness and wonder, the ordinary transformed into the extraordinary by a shift in perspective.

What other film franchise could pull off something like that? What other franchise would even try? This is the sort of thing that movies, the very best movies, were made to do—not just to distract and amuse in a predictable, disposable fashion, but to ask big questions and show viewers things they've never seen before while tugging at their heart strings.

Yes, there are better movies than the Toy Story films—perhaps even a few made by Pixar. But no other series has attempted so much and succeeded so thoroughly for so long. For all the existential angst on display, this is clearly a series that understands its own purpose.

This is probably the last entry, and that may be for the best. But as far as I'm concerned, if they can maintain this level of quality, innovation, and sheer entertainment, Pixar can extend this series to infinity and beyond.

GB News Stands Up to U.K. Cancel Culture and Wins

What People Get Wrong About Capitalism

OU Anti-Racist Seminar: 'In the Classroom, Free Speech Does Not Apply'