Reason is supported by:
David Giordano

For the past year, much of the debate over President Donald Trump's tariffs has been focused, stubbornly, on who is paying for them.

This isn't exactly a state secret. It's basic economics. It has been demonstrated to be true not only in theory but in several studies of how Trump's tariffs are affecting the cost of goods. Perhaps most obviously, here is how goods subject to tariffs have increased in price over the past year relative to non-tariff goods: 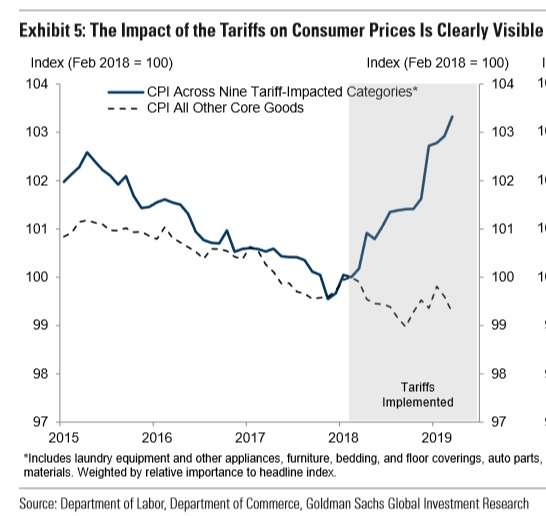 Nonetheless, this has been subject to debate, because the president has built an alternate reality in which none of these obvious facts are true. In Trump's fantasy world, the tariffs are basically free money pouring into federal coffers from China. He has made this claim in tweet after tweet, and high-ranking administration officials have repeated it in public statements. Treasury Secretary Steve Mnuchin tied himself in knots earlier this week to avoid stating the obvious—that Americans pay for the tariffs—and Trump was reportedly unhappy with Larry Kudlow, one of his senior economic aides, after Kudlow admitted to Fox News that the tariffs are being paid by Americans.

This might seem like nothing more than a snoozeworthy debate over semantics or economic theory or government P.R. strategies. But it matters a lot.

Case in point. In response to American tariffs on Chinese goods, China has effectively cut off purchases of many American farm goods—soybeans, most prominently. Previously, about 40 percent of all American-grown soybeans were exported to China. The loss of that export market has caused a glut of supply, leading prices to fall by as much as 25 percent and leaving farmers in the lurch. So yesterday Trump announced a second round of bailouts for American farmers stung by those retaliatory tariffs. This new round of farm bailouts will cost $16 billion, on top of the $12 billion that was redistributed to farmers last year.

Here's why the debate over who pays for the tariffs matters. Listen to how Trump justified the new round of bailouts on Thursday:

"It all comes from China," he said. "We'll be taking in, over time, hundreds of billions of dollars in tariffs and charges on China, and our farmers will be greatly helped."

The farm bailout is costless, Trump is arguing, because he's taking money from China and giving it to American farmers. That argument could only hold water if China were paying for the tariffs.

To repeat: Americans are paying for the tariffs.

Even if you believe, as some Trump supporters routinely argue, that China will ultimately "pay" for the tariffs in the form of lost American investment and a reduction in long-term growth—which is possible, yes—that does not change the basic fact that the tariff revenue being collected by the federal government today and redistributed to farmers tomorrow is coming out of American wallets.

Again: Americans are paying for the tariffs.

For what it's worth, Trump is wrong about the numbers too. The federal government has collected about $40 billion in tariff revenue since last year—not hundreds of billions of dollars. That means the $28 billion spent bailing out farmers accounts for about 70 percent of all tariff revenue.

It's also obvious political favoritism. Sure, farmers have been hit hard by the trade war, but so have plenty of other industries. How long before they start lining up for their own bailouts?

There are plenty of other questions about the farm bailout program, from the technical to the esoteric. The funding will flow through a New Deal–era agriculture insurance program. Taxpayers for Common Sense, a fiscal watchdog, describes the arrangement as "a backdoor revival and expansion" of a discredited farm subsidy program, "but with a few twists that make it more confusing and more costly."

Or as trade lawyer and Cato Institute scholar Scott Lincicome put it:

Honestly, I can see why this seems repetitive.