In a series of tweets starting Friday and continuing over the weekend, President Donald Trump outlined a plan for the federal government to use tariff revenue to buy agricultural goods from American farmers and redistribute it to other parts of the world.

It is, well, a pretty wild idea. 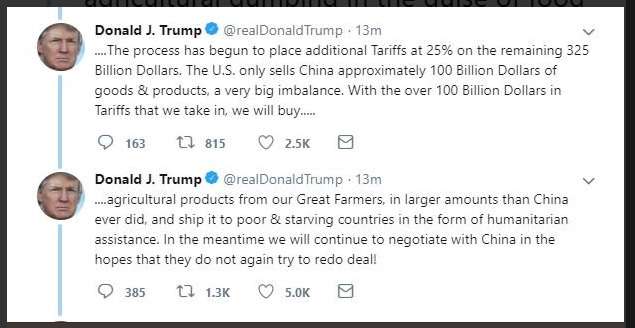 Though Trump has repeated this notion in a few other tweets, none of them go into much detail.

He seems to be proposing to use tax revenue paid by farmers—and by other Americans hurt by tariffs—to pay farmers to grow products they cannot sell, then to buy up the excess supply and spend more money shipping it to other countries where there is a demand for food.

If only there were some other mechanism for balancing supply and demand, right?

This Rube Goldberg–esque scheme is a good indicator of how convoluted Trump's trade war has become. Even before last week's ramp-up of U.S. tariffs and today's retaliatory action from China, the trade war was already warping international supply chains. Brazil, for example, was shipping more soybeans to China after China, the world's top consumer of soybeans, cut off imports of the crop from the United States. Brazil was sending so many soybeans to China that it actually had to import some from the U.S. to meet domestic demand.

Because trade, uh, finds a way.

Those alternative export markets weren't enough to make up for the loss of the Chinese market, where nearly 50 percent of all U.S.-grown soybeans ended up prior to the trade war. The Trump administration tried to ease farmers' pain by making $12 billion in payments to farmers stung by the trade war. Predictably, that became a boondoggle.

Now Trump wants to make this even more of a mess. Paying farmers to grow crops that they won't be able to sell sounds a lot like something China would do, as Reuters columnist Karen Braun points out:

The govt buying product from farmers… sounds a lot like… China. Price support/govt purchasing has artificially inflated prices in China relative to the rest of the world. There's no genuine price discovery. It didn't exactly work either, so China has been phasing that out.

Even the seemingly altruistic part of this wacky idea—handing out American surplus goods to the rest of the world—would likely be a disaster in practice.

For another, shipping goods all around the world requires a massive logistics operation that the federal government does not currently possess and likely would not handle well. And unless Trump is planning to nationalize the shipping industry too, there would be very real questions about who is paying for these shipments to "poor and starving countries." I'll give you one guess about the likely answer.

Prices and markets do a great job of predicting where supply will be needed to meet demand, even on the opposite side of the globe. There's no reason to think the federal government, once it buys up all those excess goods from American farmers, will be anywhere near as efficient. The most likely end result of Trump's Buy American policy is lots of American farm goods rotting in federal warehouses.

The Satanic Panic Is Back, and It's Bipartisan