I won't spoil anything about Avengers: Endgame, except to say: It delivers.

There are superheroes—so many superheroes—acting both super and heroic. There are villains acting villainous. There are jokes and sacrifices, witty banter and inspiring speeches, moments that will give you chills and even, perhaps, a few that will bring tears to your eyes. At the end of the movie's roughly three-hour running time, everyone in need of punching has been punched in exactly the amount they deserve to be punched. Cinematic justice is thus meted out with acute precision, as if calculated by some complex algorithm. Which, come to think of it, it probably was.

The point is: If you are fan of the Marvel Cinematic Universe (MCU)—and, based on the box office returns, you probably are—you will almost certainly leave satisfied. Avengers: Endgame is, if nothing else, a masterpiece of Hollywood franchise administration. It is not a great movie, but it is often a rather good one, and its true genius lies in the deft and seamless way it manages and eventually fulfills more than a decade of superhero movie expectations.

And there are so very, very many expectations—more than 20 films' worth, at this point. If you have watched every movie in the MCU just once, you have spent a little more than a full-time work week following the adventures of this gang of lovable super friends, which has sprawled and expanded to the point where it may sometimes feel like a spreadsheet would be handy.

That sprawl, and the need to at least acknowledge all those characters and stories and subplots, may explain the plot's schematic, episodic nature. The story is self-referential in the extreme, less an end to a decade's worth of movies than a summary and highlight reel of all that has come before. Narratively speaking, it sometimes plays more like a feature-length recap—a PowerPoint presentation intended to catch you up on the Avengers so far—than a conventionally structured story.

Like so much of today's mass culture, Endgame is a movie that indulges in a fond nostalgia for its past. Yet unlike, say, Disney's recent Star Wars sequels, it manages to be referential without being repetitive; this is a movie determined to end a chapter of a beloved story, not simply rehash and repeat it.

The individual scenes themselves, meanwhile, are executed with such verve and wit that I hardly cared whether or not they made much sense together. Endgame, like so many Marvel movies before it, works on the strength of strong characters and discrete moments, which have been honed and polished and workshopped into remarkably efficient delivery systems for pop pleasure.

That goes for the inevitable climactic showdowns as well as the smaller bits. Indeed, for a superhero epic with a zillion-dollar budget, Endgame spends a surprising amount of its running time dwelling on the ordinary minutiae of extraordinary lives. Children and families play a significant role; Thor drinks beer and helps a friend play Fortnite (really); Captain America attends a low-key support group session; Hulk signs autographs for kids; and there's a delightful mid-film disquisition on time travel movies and Back to the Future II. Even Thanos, the movie's over-muscled purple villain, gets a brief moment to relax and pick giant berries from a sun-dappled countryside. No doubt he makes a delicious fruit smoothie.

Much of Marvel's success over the last decade can be credited to its emphasis on crafting clearly defined, broadly appealing characters. These characters may not be complex in a deep, literary sense, but they are endlessly charming. You want to spend time with them, you want them to fight, and, in the end, you want them to win.

So when the fighting eventually begins in earnest, as it inevitably does, you find yourself thoroughly primed to root for victory. Endgame culminates in perhaps the grandest superhero battle ever put on screen, a spectacle that somehow manages to make effective and coherent use of nearly all of the main and supporting characters that have passed through the MCU over the past decade. It is the payoff to 11 years and 22 movies worth of build up—and somehow, it's worth it.

I have sometimes been critical of Marvel's formulaic approach to filmmaking, of the studio's too-standardized action scenes and overreliance on weightless computer-generated effects; most of those criticisms still apply here.

Yet I have also found more than a small amount of genuine enjoyment in the MCU over the years, in the franchise's blend of jocular wit, lavish action bombast, and serialized twists and turns. The pleasures of a top-tier Marvel movie are the much the same as the pleasures of the Marvel comic books they are based on; the best ones have the capacity to inspire an innocent, childlike glee, or at least an exceptionally well-rendered, corporate-funded simulacra of the same. A good Marvel movie reminds my cynical adult self of the un-cynical excitement I once had coming home from school and finding a new issue of a comic book in the mail. Marvel offers escapism not only into its own imaginary world, but into the even more addictive nostalgia of one's personal past.

Endgame did more than remind me of those pleasures. It amplified them, focused them, gave them an almost talismanic power, as if MCU mastermind Kevin Feige had somehow made the movie with the help of the Soul Stone. It was everything I wanted a Marvel movie to be. 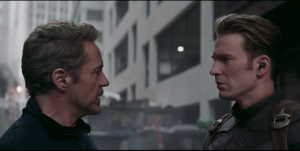 And if there's a problem with the movie, that's it. Marvel, in combination with its owner, Disney, and its recent streaming partner, Netflix, has helped usher in a world in which the vast resources of our pop culture overlords—and especially those in Hollywood—are largely devoted to the precise and methodical setting and meeting of expectations. One of the principal objectives, in other words, is to never challenge or upset viewers, who are now understood as fan-stakeholders. The goal instead is to survey and train the desires of those viewers, and then find a way to consistently deliver. These properties may be owned by billion dollar corporations, but their use has been, at least partially, given over to the will and taste of the collective, with predictably bland results.

There is nothing wrong with this sort of cinematic comfort food, per se, and there are real benefits to a cinema that is more responsive to fandom—among them that it is often far more respectful to the original properties, because it understands their essential appeal. But a decade into Marvel's reign, it's clear there are downsides, too, most notably in the lack of novelty or surprise. A movie like Endgame is merely as good as I hoped it would be; truly great movies offer something viewers could never imagine on their own.

A year ago, when Endgame's perfectly tolerable but notably inferior predecessor, Infinity War, hit theaters, I wondered if Hollywood would settle for devoting the largest share of its resources to merely competent, pretty good, superhero blockbusters that aimed only to please crowds in familiar ways.

Endgame, sure to be one of the year's most successful box-office draws, seems to answer that question with an enthusiastic yes: It might be the very best pretty good movie I have ever seen. The fan service in Endgame is exquisite and masterful, almost an art unto itself—but it's still fan service. And even though I am personally a fan, and enjoy being served as such, some small part of me was still hoping for something more.