In a New England Journal of Medicine commentary published today, the authors of the opioid prescribing guidelines that the U.S. Centers for Disease Control and Prevention issued in 2016 reiterate the agency's recent warning that it does not recommend abrupt or nonconsensual tapering for patients who are already taking high doses of narcotic analgesics for chronic pain. "Unfortunately, some policies and practices purportedly derived from the guideline have in fact been inconsistent with, and often go beyond, its recommendations," write Deborah Dowell, Tamara Haegerich, and Roger Chou. Those policies and practices, they say, include "inflexible application of recommended dosage and duration thresholds and policies that encourage hard limits and abrupt tapering of drug dosages, resulting in sudden opioid discontinuation or dismissal of patients from a physician's practice."

Dowell, Haegerich, and Chou warn that patients forced to reduce their doses "could face risks related to withdrawal symptoms, increased pain, or unrecognized opioid use disorder" and "if their dosages are abruptly tapered may seek other sources of opioids or have adverse psychological and physical outcomes." They also worry that doctors are responding to the CDC's advice about the potential risks of opioids by "dismiss[ing] patients from care" or declining to prescribe opioids at all, "even in situations in which the benefits might outweigh the risks." Dowell et al. say "such actions disregard messages emphasized in the guideline that clinicians should not dismiss patients from care, which can adversely affect patient safety, could represent patient abandonment, and can result in missed opportunities to provide potentially lifesaving information and treatment." And they note that the guidelines have been improperly applied to "patients with pain associated with cancer, surgical procedures, or acute sickle cell crises."

The CDC's recognition that misinterpretation of its guidelines has resulted in needless suffering, patient abandonment, and "adverse psychological and physical outcomes" (including suicide) is welcome, if overdue. "This article should allay anxiety among physicians who prescribe responsibly for patients with chronic pain," says Sally Satel, a Washington, D.C., psychiatrist who helped organize a March 6 letter to the CDC in which hundreds of health professionals and addiction specialists, including three former drug czars, expressed concern about the unintended consequences of the CDC's advice. "No longer can any clinician, insurer, health care system, or pharmacist claim 'the CDC Guideline says' when it comes to tapering or discontinuation."

Stefan Kertesz, a University of Alabama at Birmingham pain and addiction specialist who worked with Satel on the letter to the CDC, was also heartened by the NEJM article. "We needed CDC and its guideline's authors to do precisely what they have done, which was to speak with vigor and clarity to the pressing ethical concern we laid out in our letter," he says. "In affirming that the guideline did not call for hard dose cutoffs and forced tapers, the guideline's authors have effectively called for recalibration of policies by insurers, by Medicaid authorities, and by agencies that have set 'the number of patients above a given dose' as the primary indicator of bad care."

The letter to the CDC included testimony from hundreds of patients who have suffered the consequences of that ham-handed approach. "The trauma to patients who have been living in terror these past three years nearly broke my heart many times," Kertesz says. "The only possible step has been for people familiar with the nexus of science and health policy to speak openly about the problems we have seen, and to trust that most people ultimately want to do what's right."

Yet Dowell et al. conspicuously fail to take any responsibility for the unintended but foreseeable harm caused by their advice. When a document is as widely misconstrued as the CDC's guidelines have been—by insurers, regulators, legislators, pharmacists, and law enforcement agencies as well as clinicians—it is fair to ask how the authors left themselves open to misinterpretation.

According to the guidelines, "Clinicians should use caution when prescribing opioids at any dosage, should carefully reassess evidence of individual benefits and risks when considering increasing dosage to ≥50 morphine milligram equivalents (MME)/day, and should avoid increasing dosage to ≥90 MME/day or carefully justify a decision to titrate dosage to ≥90 MME/day." The implication is that doses of 90 MME or more per day are rarely, if ever, medically justified.

It is hardly a stretch for physicians with patients who exceed this arbitrary threshold, including patients who have been functioning well on high doses for years, to worry that they will be perceived as practicing outside the bounds of proper medical care. Given the scrutiny that regulators and law enforcement agencies such as the Drug Enforcement Administration (DEA) have been applying to doctors in response to the "opioid epidemic," prescribing practices portrayed as extreme and dubious by the CDC are apt to attract unwelcome attention that could jeopardize a physician's livelihood and liberty.

"We still, unfortunately, have physicians who worry about capriciousness on the part of the DEA," Satel notes. "That is the next step in efforts to ensure that doctors can continue to serve pain patients who have been benefiting from opioids." While "the DEA does indeed have a job to do," she says, "doctors are confused about what could make them a target."

How doctors respond to anti-opioid pressure will depend on how they weigh their duty to patients against their personal risk. In this context, forced tapering and abandonment were predictable outcomes, even though the CDC guidelines say doctors should reduce doses only when the risks outweigh the benefits and describe the process as collaborative and consensual.

Dowell et al. complain that "the guideline has been misimplemented," saying "policies invoking the opioid-prescribing guideline that do not actually reflect its content and nuances can be used to justify actions contrary to the guideline's intent." But those nuances were bound to be lost amid the fear and anxiety caused by the government's crackdown on prescription pain relievers. 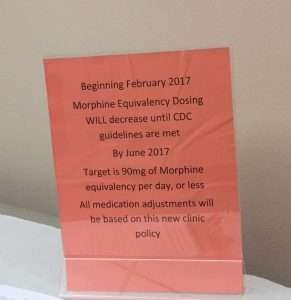 Notwithstanding Dowell et al.'s disavowal of "hard limits and abrupt tapering," that is what happened across the country after the CDC guidelines came out, as reflected in this sign at a doctor's office in Washington state. "Beginning February 2017," it says, "Morphine Equivalency Dosing WILL decrease until CDC guidelines are met by June 2017. Target is 90mg of Morphine equivalency per day, or less. All medication adjustments will be based on this new clinic policy."

While decrying involuntary and precipitous tapering, Dowell et al. present the general decline in opioid prescribing as a sign of progress. "Although outpatient opioid prescribing had been declining since 2012," they write, "accelerated decreases—including in high-risk prescribing—followed the guideline's release." Yet the continuing drive to reduce the volume of opioids prescribed in the United States has encouraged doctors, insurers, and policy makers to target patients on high doses, who consume a disproportionate share of the total. Kertesz emphasized that point at a recent conference in Charleston.

Dowell et al. do not acknowledge the downside to the decline in opioid prescribing, which has been accompanied by a surge in opioid-related deaths as both patients and nonmedical users turn to the black market, where the drugs are much more dangerous because potency is highly variable and unpredictable. Nor do they question their emphasis on the 90-MME threshold, which is scientifically problematic for several reasons. It assumes that analgesic effect corresponds to overdose risk and that different opioids can be reliably compared to each other based on fixed ratios. It ignores numerous factors that affect how a patient responds to a given dose of a particular opioid, including obvious considerations such as the patient's weight, treatment history, and pain intensity as well as subtler ones such as interactions with other drugs (which can suppress or amplify an opioid's effects) and genetically determined differences in enzyme production and opioid receptors.

"Policies should allow clinicians to account for each patient's unique circumstances in making clinical decisions," Dowell et al. write. The CDC's 90-MME threshold, however it was intended, has in practice encouraged a much less discriminating approach, one that sacrifices patients' welfare for the sake of conforming with the perceived demands of the federal government.

"The CDC bears full responsibility for how these arbitrary dose levels are being implemented throughout the country and the consequences for the people in pain," Lynn Webster, a former president of the American Academy of Pain Medicine who signed the March 6 letter to the CDC, told me last year. "I said at the time when they were proposed that if something comes from the CDC as a guideline, it is more than a guideline. It will be interpreted basically as a level of dosing that if you exceed [it], then you are at legal jeopardy."