American colleges and universities have long been the most sought-after in the world, as judged by the number of foreign students who come to study here. About 20 percent of college students who study abroad choose a school in the United States. That's almost twice the percentage that choose somewhere in the United Kingdom, the second-most popular location. 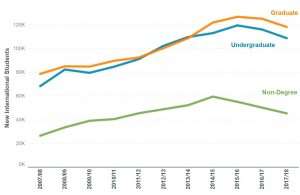 As the IIE notes, the decline in new students is offset a bit by the number of foreign students who participate in the "Optional Practical Training (OPT) program, which allows international students to practice their skills in the United States for up to 12 months during or after they complete their academic programs, or up to 36 months for students who have earned a degree in STEM fields." If you factor in OPT folks, the number of international students increased overall by 1.5 percent between 2016/17 and 2017/18 (the last year for which there is data). But with fewer new students enrolling, there will be fewer graduates eligible for OPT down the road.

Why are foreign students, who mostly come from China (33 percent), India (18 percent), and South Korea (5 percent), bypassing the United States? Writing at Forbes, Stuart Anderson, the executive director of the National Foundation for American Policy, states that "the Trump administration has made it more difficult for international students to stay or work in America." Among other things, the White House is working to reduce or eliminate the OPT program, has made it easier for international students to get deported due to clerical errors, and made it harder and more expensive to get an H-1B visa, which is the sort of work permit most international college grads need to stay in the country. And both President Trump and many in the Republican Party are pushing legislation that would reduce legal immigration by 50 percent.

It's not just students who are thinking twice about coming to America. As a friend of mine who runs a math department at a top-tier public university has told me, foreign-born faculty are also thinking twice about coming to a country in which immigration policy is becoming more restrictionist. So we're not just losing students who want to come here, but also faculty, researchers, and scholars.

In trying to "Make America Great Again," Donald Trump and his allies are trying to reduce the number of foreign-born people living here. To the extent that they succeed, they will be making U.S. colleges and universities less desirable than they once were. Given declining birthrates and the outsized role immigrants play in starting new companies—foreign-born individuals comprise 15 percent of the labor force but are 25 percent of entrepreneurs who start new businesses—scaring off newcomers is a recipe for decline, not greatness.