When Communists wrote movies in Old Hollywood, the results sometimes were straight-up Soviet propaganda. The most infamous example is Mission to Moscow (1943), a drama so committed to the Stalinist worldview that it includes an extended defense of the purge trials. But that was made during World War II, when both studio and state were eager to praise Washington's ally in Moscow. Under other circumstances, red writers trying to translate their politics into an American idiom sometimes found themselves in less Leninist territories.

That was one theme of my recent article about the Hollywood blacklist, which noted one peculiar picture in particular:

As the independent historian Bill Kauffman once commented, when communist filmmakers had to work "within studio straightjackets," they often "channeled their work into 'populist' avenues (the small banker fighting the big banks, the lone man against the crowd) and wound up sounding libertarian."

Take 1958's Terror in a Texas Town, a Western best known today for a gloriously weird showdown that pits a gunman against a man armed with a whaling harpoon. Here the blacklisted [Dalton] Trumbo (working behind a front) wrote a story in which a wealthy businessman used both private violence and a corrupt government to seize property from independent farmers. I can see why a Marxist would like the movie, but a Randian might appreciate it too. Who exactly was subverting whom? 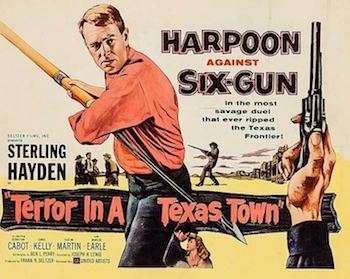 Terror in a Texas Town came out near the end of the blacklist era, when the rules were starting to unravel. Trumbo still had to work behind a front, but another blacklistee—Ned Young, who plays the villainous gunfighter Johnny Crale—appears onscreen with full credit. I'm glad he's there, because his performance is the best thing about the movie. (Yes, even better than the harpoon.) The worst thing about the movie is how Trumbo wrote the Mexican characters. They're patronizing caricatures: the sorts of roles that no doubt felt like a liberal gesture at the time (they're sympathetic victims!) but now feel cringe-inducingly condescending.

It's a good film overall: taut and entertaining, with a stark noir look. I've embedded it below so you can check it out for yourself.

Why Biden's Broadband Bonanza Is Likely to Fail

Christian Britschgi | From the May 2021 issue

Biden's Gun-Limitation Schemes Make a Mockery of His 'Unity' Message

The president is picking fights with much of the population and further dividing the country.