Let me tell you about a fiery individualist with an uncompromising vision. A fierce defender of reason and innovation. A brilliant scientist who defies superstition and evades the law to conduct his experiments in secret. A heroic figure who refuses to bend the knee to his oppressors, even when the clerisy attacks his work and the authorities seize his property.

Let me tell you about Dr. Victor Frankenstein, as portrayed by Peter Cushing in the 1964 film The Evil of Frankentein. 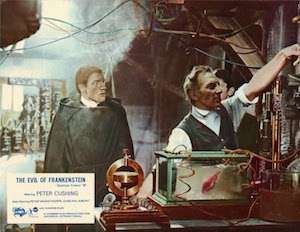 The movie was produced by Hammer Film Productions, the British studio that made some of the most enjoyable horror pictures of the 1950s, '60s, and '70s. In theory, it is a sequel to The Curse of Frankenstein and The Revenge of Frankenstein. In practice, it creates a new backstory and an entirely new persona for the title character, who in other Hammer Frankenstein films is immoral and contemptible but here becomes entirely sympathetic. Don't be misled by the ironic title: The evil forces in this film are the people who keep accusing the title character of being evil.

More specifically, the evil forces are the church and the state. Business occupies a more complicated position. An entrepreneur—to be precise, a carnie with an unlicensed mesmerism act—forges an alliance with Dr. Frankenstein, his fellow victim of police harassment. But the businessmen's pursuit of his own self-interest eventually puts him and the doctor at odds. I don't want to give away too many spoilers, so I'll just say he turns out to be susceptible to non-market incentives.

Look, I'm not going to tell you that there aren't any holes in this plot. And no, director Freddie Francis isn't quite as skilled as Terence Fisher, the man who helmed most of Hammer's Frankenstein series. But how often do you get to see a Frankenstein picture where the so-called mad scientist is the hero? "Anything they don't understand, anything that doesn't conform to their stupid little patterns, they destroy," Cushing's character complains at one point. "They have to destroy it! But they haven't beaten me."

(For past editions of the Friday A/V Club, go here. For an appreciation of the Mary Shelley novel that launched a thousand Frankenstein tales, read Ron Bailey's essay in the April edition of Reason, available on better newsstands.)