Scott wasn't exactly blazing new ground here. One force lighting the fire for bringing armed cops and intrusive surveillance into American education, after all, was the Gun-Free Schools Act of 1994. Gun control and militarized schooling have long gone hand in hand. To treat them as opposed approaches, you have to ignore the last quarter-century of zero tolerance policy. 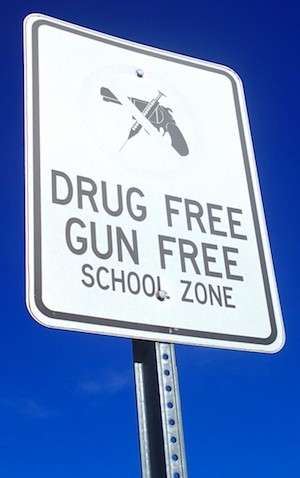 Do they have to go hand in hand? Not per se. Schools can certainly try to be either gun-free or gun-friendly without erecting a TSA-style police state. There have been plenty of schools that have rules against firearms but haven't hired a gun-toting enforcer. And there have been plenty of schools where pretty much any adult who wants can have a gun on the premises. (In all the recent discussion of arming teachers, few have bothered to point out that more than a dozen states already allow instructors to bring guns to school.)

But when politicians produce public policy for an entire state—or an entire country—a host of forces tend to draw gun restrictions together with armed enforcement of gun restrictions. More broadly, it isn't unusual for firearm controls to be packaged with other law-and-order measures, both inside and outside America's schools.

That's the dynamic at play in Gov. Scott's office right now. And if the Democrats run the table in November, take both houses of Congress, and decide to push for stricter gun laws than Florida's Republican governor is willing to endorse, the same dynamic will probably be at work in any Schumer-Trump compromise we see. It's not like Chuck Schumer is a civil libertarian, after all. And Trump's positions on gun control are opportunistic and have long been prone to changing. He's already backing a bump stock ban, "comprehensive background checks" (whatever he might mean by that), and raising the age at which a civilian can buy a semi-automatic rifle. Don't be surprised if someday he goes further.