Last night I was a little stunned to see this sentence in a Hill story writing up a new poll:

Only 22 percent of Trump supporters believe he will start a nuclear war. 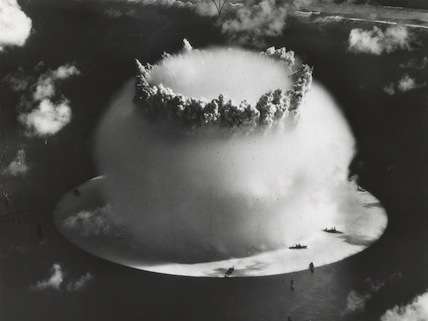 Turns out The Hill misread the results. The poll, which was sponsored by an anti-Trump Republican group called the Lincoln Leadership Initiative, had actually asked people what they thought the chances were that Trump would begin a nuclear war. Donald Trump's supporters thought there was a 22 percent chance; for Americans as a whole, the figure was 46 percent. Want to compare that to how likely Trump voters think is it that Hillary Clinton will use nukes? You can't; the pollsters didn't ask.

Needless to say, telling people to estimate probabilities this way is a pretty useless exercise. If I thought there was a 10 percent chance a candidate was going to launch those missiles, I'd consider that a ridiculously high risk. But I suspect a lot of people would just figure that 10 is a low number and use it to mean "not likely." Picking 20 might mean "probably not." Or maybe it doesn't. Who knows?

Still: If you're curious what arbitrary numeric values Americans assigned to various policies Trump might pursue, you can go here to see the survey data and you can go here to see a write-up that, unlike the Hill piece, represents the results correctly. If you'd like to translate those dry numbers into a metaphor Americans can relate to, like Skittles, our comment thread is open here.